Pictures of Rocks (Not!)

It has been said that I take great pictures of rocks. And trees. In fact, when we did the Rob Stimpson workshop, I was told several times, "no pictures of rocks!" Not only by Rob, but also by the other participants!

The purpose of the exercise was to move out of your comfort zone. Definitely, I'm not comfortable taking pictures of people. So I've been working on it. Here are some examples, I hope you like them. 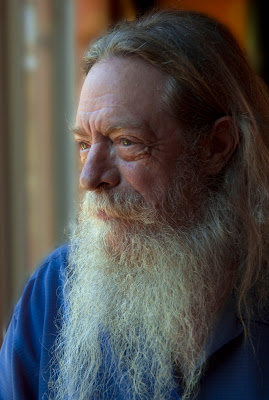 I took this picture of "George" at the Deep Gorge Center near Lake Placid New York where we stopped for some photos. George was having lunch and I commented how much I liked his beard, and asked if I could photograph him. I got him to stand near a window and used natural light.

The exposure was handheld at 1/25 sec (thanks, Nikon, for VR!), one stop underexposed so that I didn't blow out any of the detail. Really the only PhotoShop work I did was to blur the background (easy to say, not so easy to do: I "extracted" his image and put it on another layer), and some small hue/saturation adjustments.

I only took one image, interestingly. 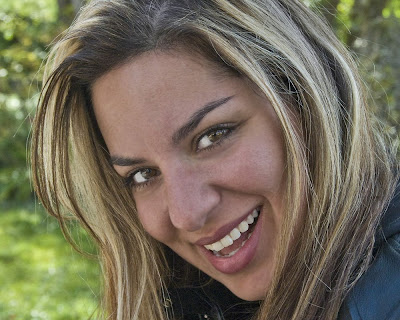 Nella is a motorcyclist, she's a member of the Acme Motorcycle club. They went on a ride today and I met up with them for lunch in Coboconk. Afterwards, I took a few pictures including this one of Nella.

People think I do too much Photoshopping. Maybe, but I like it and I think I'm getting better at it. This picture only needed a little work, because Nella's skin is soft and smooth, the lighting was great, she has a great smile and I love her hair. Still, I sharpened the eyes, desaturated the whites of the eyes, fixed up a few blemishes and did some work under her eyes. I softened the skin with a blur layer although I didn't really need to. I liked the above image, Nella didn't see it, I hope she likes it. She saw the next image on the camera and said she liked it so I worked on it as well. 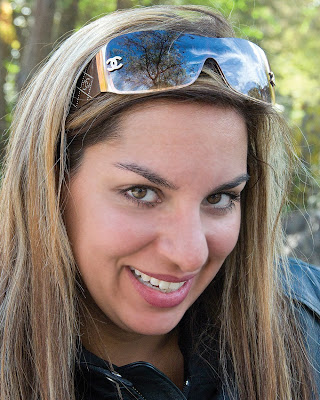 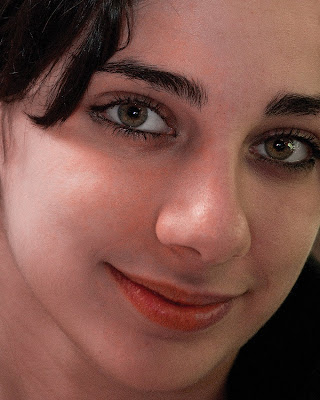 Vanessa is Nella's cousin. She was along for the ride (as a passenger, her first time on a bike, BTW) and I tried to get some shots of her both inside and outside the restaurant. Not that successful, until I got home and saw this one on the computer. It was taken inside the restaurant at an ISO of 1600, which made it very grainy/noisy. Also there was some kind of lighting from her left side (stage right!) that was green in colour. So I managed to colour correct that (hue/saturation adjustment layer, select "greens" instead of "master"), then I looked at a crop of the image and loved it. I worked on the whites of the eyes a little, desaturating them, and I turned up the sharpening on the eyes. I also lightened their colour a little.

Before finishing the photo, I looked at it blown up and didn't like the noise on the lips. So I selected them and applied a gaussian blur to smooth them. The same for the whites of the eyes.

Speaking of her eyes, I loved them so much that I had to do a tight crop. Like it? 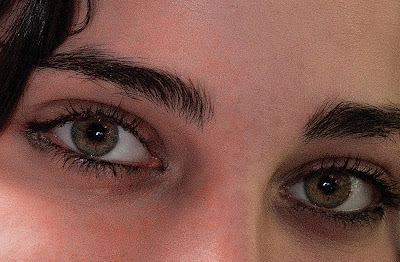 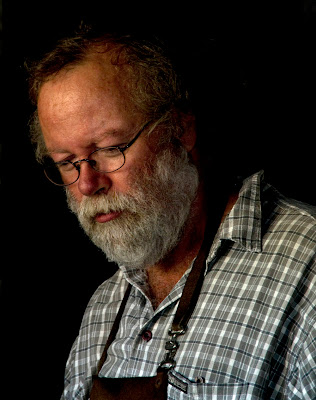 One more: This is Tom, the blacksmith at Fleming College in Haliburton. He cooperated with us for our workshop, acting as a model and we experimented with various lighting solutions. I used a Gary Fong diffuser on my SB-600 flash, but set it a couple of stops down so that it would act as a fill light not overpower the image.

Wde also ran into a couple from Toronto on that weekend, who coincidentally handed one of us a point-and-shoot camera and said, "would you take our picture for us?" Sure thing, since we were working on "outdoor portraiture"! I haven't worked on those images yet, so I'll have to put them up later.

Reminder: you can see most of my work on my gallery site here, or click at right.

Posted by Glenn Springer at 7:50 pm