Don't Leave Home without It!

I'll talk about that in a few minutes. But first, here's what I did on Sunday...

I took my grandson Ryan (and son-in-law Richard) up to my friend Clinton's "Canadian Motorcycle Training School" in Horseshoe Valley near Barrie. He's 12 years old as I write this (it's Wednesday Morning, 3AM. A song title!) and it's his second visit here. If you're at all interested, this is one of the most fun and challenging things you can do. AND, Clinton teaches kids as young as 6 years old! As a motorcycle instructor, I'm awed by the fact that he gets people riding within a few moments! CMTS supplies EVERYTHING — not only the bike but they outfit you from head to toe. Check them out here: www.cmts.org 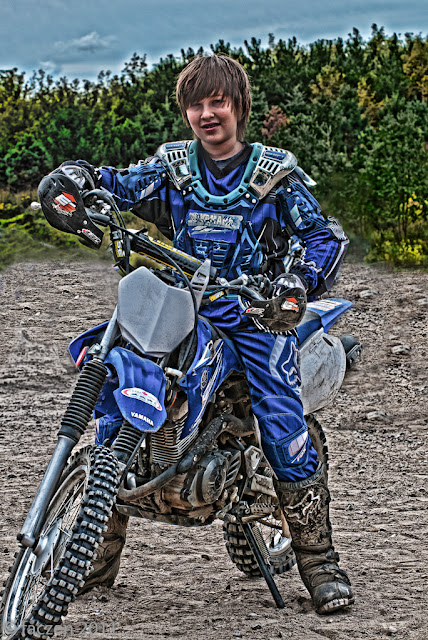 Ryan, the "Power Ranger"! Outfitted from head to toe in proper safety gear (without the helmet for the picture, of course). This is a heavily processed HDR which gives the impression he should be riding a futuristic vehicle from Star Wars!

Here's a shot of Clinton teaching a couple of really small kids to ride ATV's. Their siblings — not much bigger — were on motorcycles! 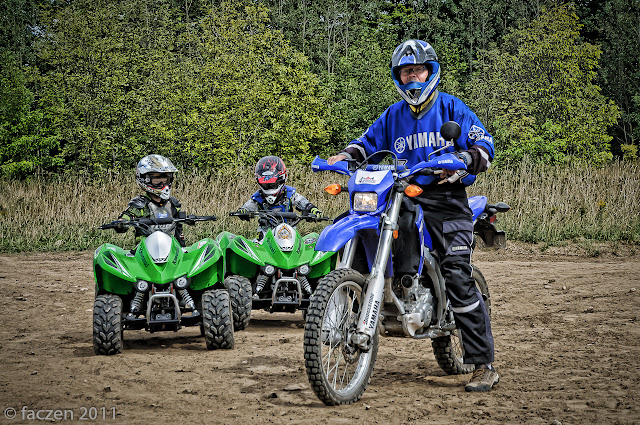 Ryan was riding a Yamaha TTR-125L — one of the bikes we used to use to teach adults to ride on the street at Humber College. The challenge: this bike has a clutch and manual transmission. It didn't take Ryan long to learn how to use it and to shift gears. They put him in the same class as Richard, and treated him like an adult. 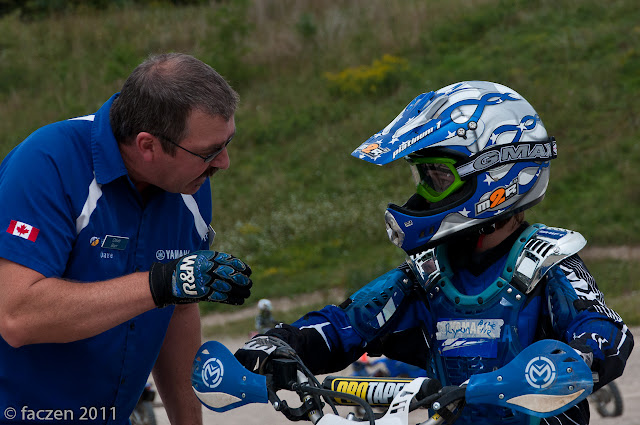 Instructor Dave Barr coaching Ryan on how to use the clutch and shift gears. Dave used to work with me at Humber College but now teaches closer to home at CMTS.

Richard had a shorter learning curve. Being a pilot, snowmobiler and all-around power sports enthusiast, he took to the dirt bike very naturally. He demonstrated a pretty high skill level for someone who had never been on a bike before. 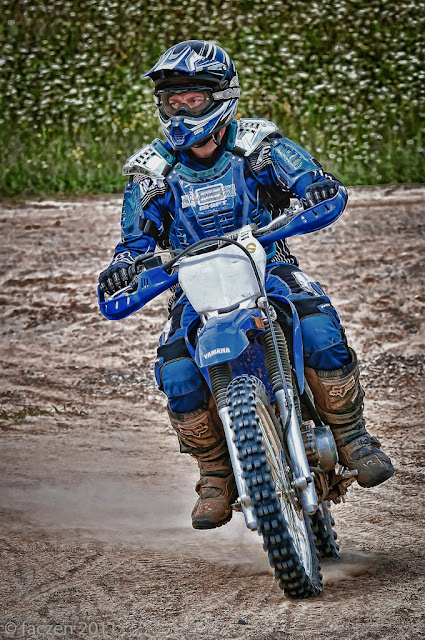 Again a pretty heavy level of HDR toning. One image, processed with Topaz Adjust. I also used Nik Viveza 2 to tone down the green background. I never tried it before — it's a pretty impressive program. 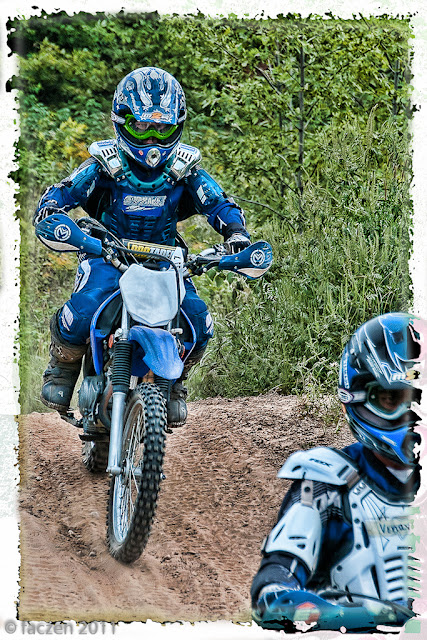 Here's Ryan bombing around the track at CMTS. I swear the guy he's chasing is a Star Wars Storm Trooper! Richard managed to get 'air' off that bump Ryan's just past. I got a few pictures, but you'll have to go to my gallery to see them. Special border effects done with Nik Color Efex Pro, emulating an old Polaroid picture (looks better on a white background).

In order to get these pictures, I had to ride my KLR 650 out to the track, down a few hundred meters of dirt path. I was a little nervous with my camera pack on my back, I really didn't want to fall. I almost lost it once or twice when my front wheel dug into some soft sand... the KLR's a heavy bike. I'm really a useless offroad rider and I'm afraid to take the training with my knee and leg problems. I rode about 90 minutes each way from my house to CMTS and my legs are still sore 2 days later.

Today I went for an afternoon walk and took my camera with me as usual. I left the pack at home and just took the camera, with the 70-200 lens mounted. I spent a few minutes on my dock, lamenting the fact that the water levels in the lake have been lowered to the point where the dock is entirely out of the water. Then I walked further along the road. About 75m further, I happened to glance in a tree and there was a humungous wasp nest. Not a lot of activity, so I ventured closer for a better look.

The blended colours and textures of the nest are exactly what I've been studying as I head towards picking up a paintbrush for the first time. It looks like something a master artist would create. I got as close as I dared with the 70-200 lens — probably 8-10 feet away. Bracing it on a tree so that I could stop down a little bit, I captured this shot. I love it! 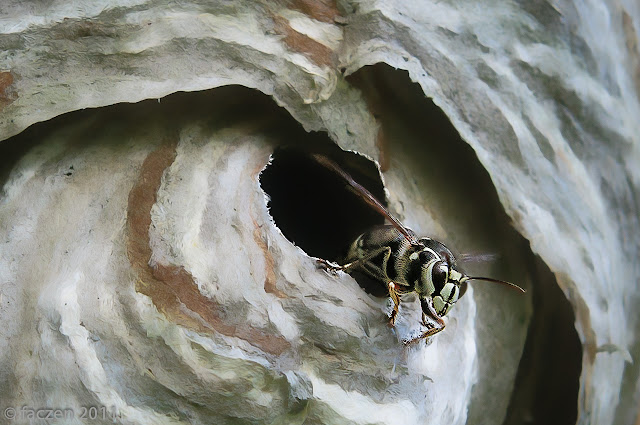 Apparently, these are "Baldfaced Hornets" (Dolichovespula maculata — Google is your friend!). 200mm, ISO=640, 1/100 second, f/8. I used every trick I know to carefully sharpen the insect, but i used Topaz Adjust 'simplify' on the nest to blend the colours

So when I say, "don't leave home without a camera", now you know what I mean!

Another 3 week absence. My email is clogged with "where are you?" and "why haven't you written anything?" and "Are you OK? Did you fall off the Earth?" type messages. I guess I needed some down time to reflect on where I am and where I'm going.

I actually spent some time with real human beings. Not cybernerds, not pixelheads. Well sort of — in between 3 motorcycle courses, swimming and biking and other stuff, I sat on a dock, watched the sunset and talked about non-photographic stuff. I enjoyed a whole new level of interaction that didn't involve a camera and with minimal computer time. I also met a new person who is influencing my life to a degree. Some stuff I won't share on a blog, but there is an interesting dimension. She's an artist. I'm about that far from picking up a paintbrush. Yes, a real one, not wired through my Wacom tablet.

For the past two weeks, I didn't pick up a single photo book or magazine (well that all stopped last weekend, but...). Instead, I looked through a thick tome of Group of Seven paintings, a book of Picasso's work... and just viewed the world differently. My perspective is changing. I don't know if I'm ready to put it into effect, but I'm slowly trying.

My artist friend told me, "stop thinking about composition. About f/stops and shutter speeds. In fact, stop thinking. Just do what comes naturally". In my defense, that's what I've been trying to do! Her point is, "stop trying, do it!" It's hard to put in words what she's taught me. Once, we pulled over to the side of the road for a long discussion about colour blends and complements, and she showed me a patch of sand and some grass and how the light blended them... hope I can get it.

You tell me whether you see a change in my work. Not today or tomorrow, over time. I'm heading in a new direction.

Back to reality. We visited the Minden Cultural Centre one afternoon. There's an art gallery (yeah, well — a daily drawing of a teapot doesn't turn me on), and some 19th century buildings. HDR material: here are a couple of shots. 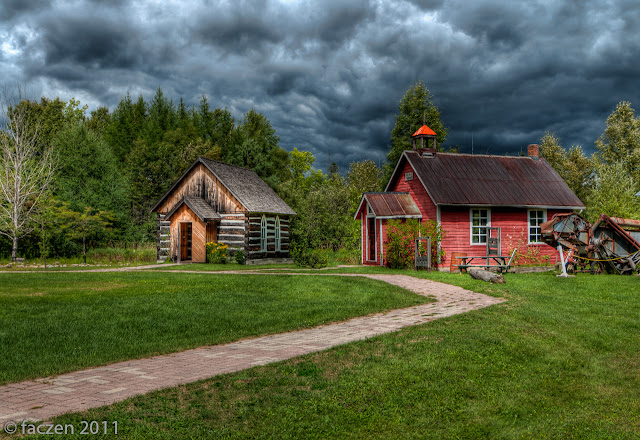 The focal point is the bright orange cupola on the schoolhouse. I tried to lead your eye there with the sidewalk. Great dramatic sky
don't you think? 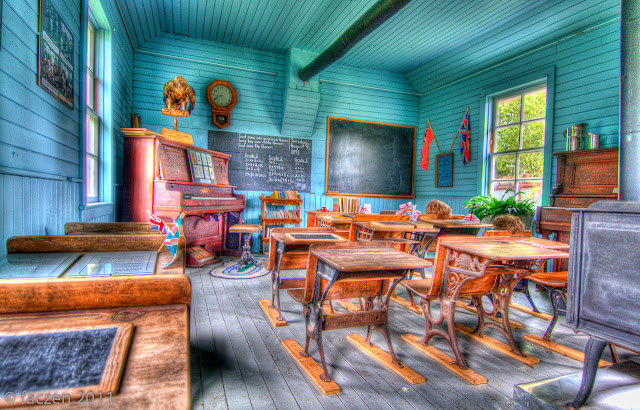 Inside the schoolhouse. I think the desks are on skids so the curator can move them around more easily. There was a similar picture chosen as "Editor's Choice" on the NAPP portfolio site this week
I like mine better!

Last weekend, I spent a few days with some really good photographers and friends. Whenever I do that, I somehow end up with some interesting images. Here are a few of them, starting with the mundane and progressing to the 'cool' side.

We spent several hours photographing the "Thunder on the Grand" boat races in Dunnville. Here are two of my favourites: 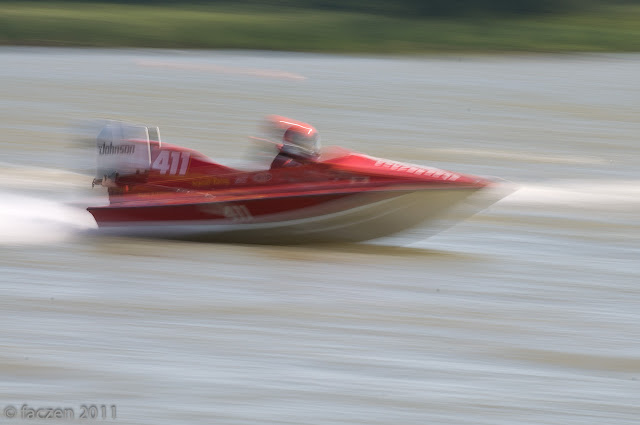 I shot almost everything at a slow shutter speed. This one was extreme: 1/15 second. I wanted to achieve an abstract motion blur. 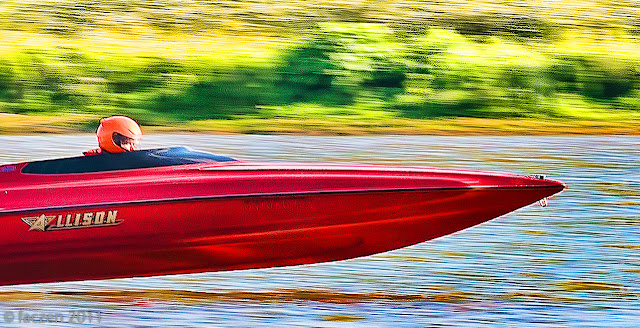 This was also at a slow shutter speed – 1/125 second. My friends were shooting at 1/1000 second to freeze the action. By panning, I captured a sharp image of the boat and the motion blur of the background. He was travelling at almost 100 mph. 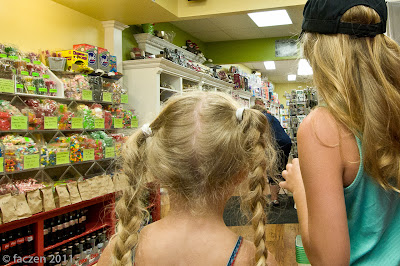 Kids in a Candy Store. I couldn't resist. Imagine their expressions, and what was going through their minds. 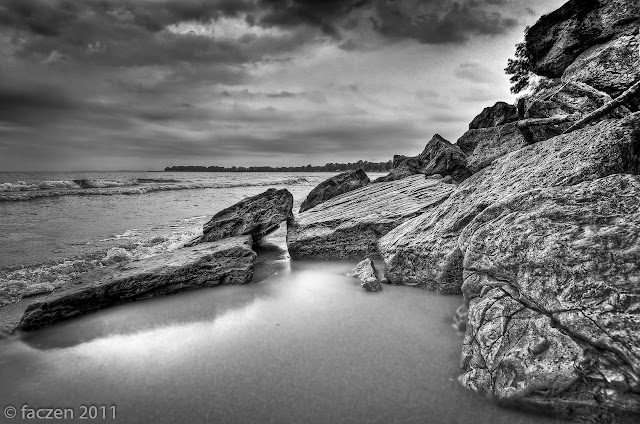 Lake Erie on a moody day. Although Photomatix HDR and Topaz Adjust toning added texture and sharpness (well softness in the sky), this is much more effective in black-and-white than in colour. 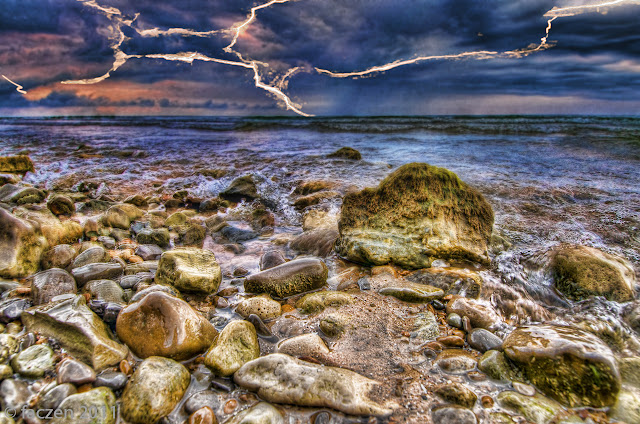 The final image for today is another HDR, but the lightning has been artificially added. I read a tutorial on how to create it on the NAPP site and this is my first attempt. I'll write it up on my technical blog in a bit, but if you're a NAPP member, you can watch Corey's video yourself.


These last two images are works in progress. The lightning shot especially: it doesn't look real yet. The concept is there, but execution is not. Still, it's interesting and a way to spice up a sky. I plan to do some more work on them so stay tuned!

I can't believe it's been almost a month

Where has time gone? I've been enjoying myself this July, visiting with friends, spending time with special projects and working my buns off teaching in the 50 degree heat. So not a lot of images to share, but I do have a few. 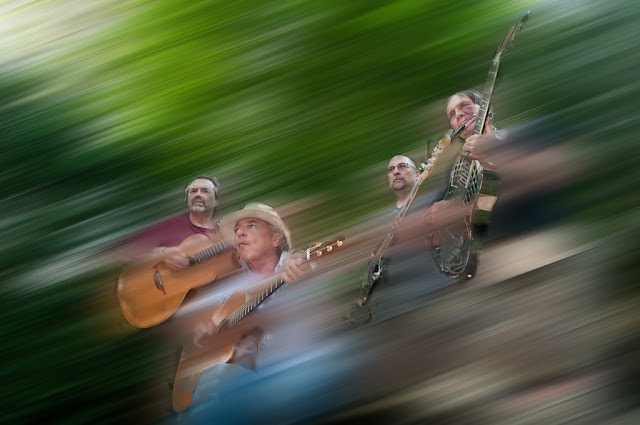 This is my cousin's band, FOG (Four Old Guys). Their first CD is entitled "Eye of the Storm" and I thought this would make a nice cover photo. 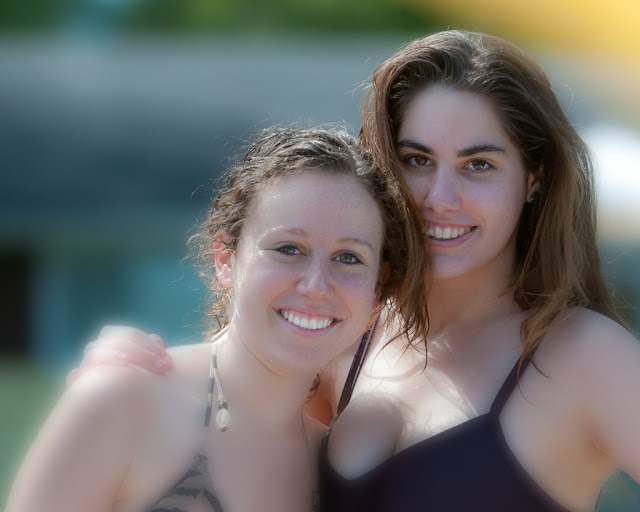 Janie's nieces Melanie and Taylor. A little cosmetics in Photoshop (not needed, these are very beautiful girls) and a vignette blur in Nik Color Efex pro. You can't take a bad picture with the 70-200 f/2.8 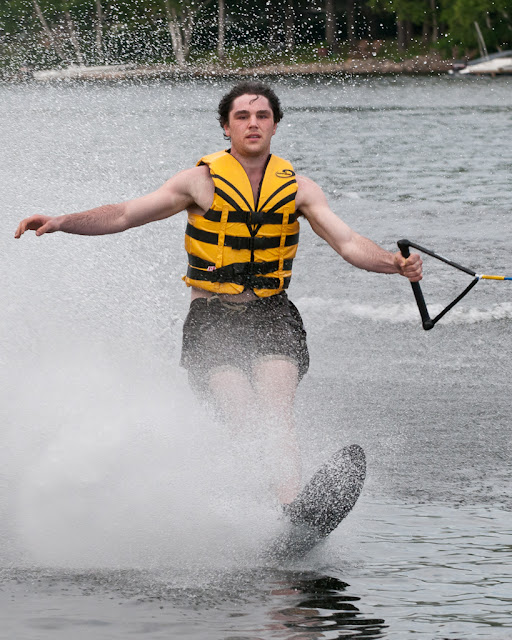 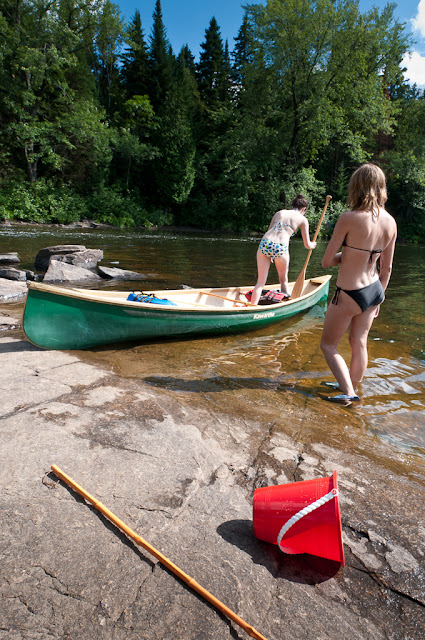 At Furnace Falls near Kinmount. There's something about this picture I like (other than the svelte young female in the black bikini). I tried cropping the photo, but the pail and stick in the foreground really help the image. 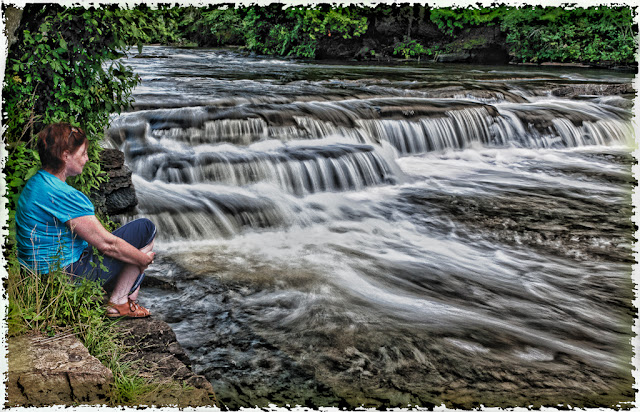 HDR image taken at Furnace Falls. Three shots, with the
variable ND filter on the wide angle lens.
Notice all of my pictures have people in them? A departure for me! Anyway, here's one without. 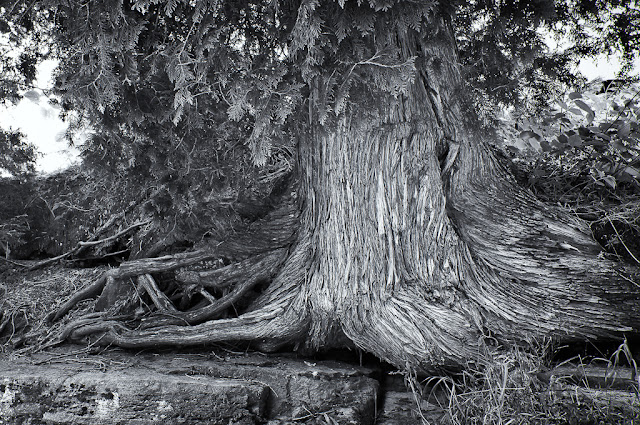 Also at Furnace Falls. BW conversion by Nik Silver Efex pro.
Posted by Glenn Springer at 12:18 am No comments: Links to this post