Whitewater Fun and other stuff

It's been an active weekend shooting pictures. I'd been meaning to drop into the Minden Wildwater Preserve (for those who were on that course last fall up here -- do you remember the cemetery we visited? This is right around the corner). I've been here before, but never when there were actually kayakers on the water.

Would you believe I actually filled up a 4Gb CF-card? And ran out of battery? (I changed the battery, but had left my spare memory cards at home). Anyway, what fascinating photo-ops!

Here are a few shots: 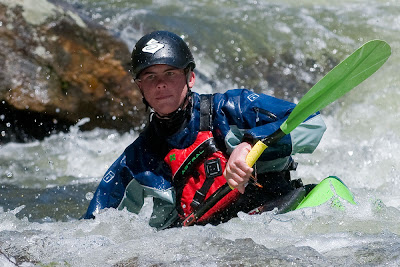 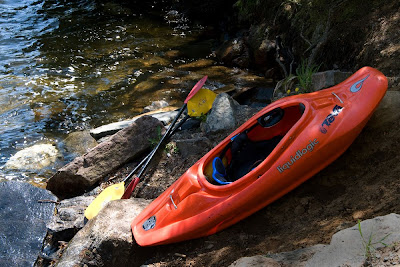 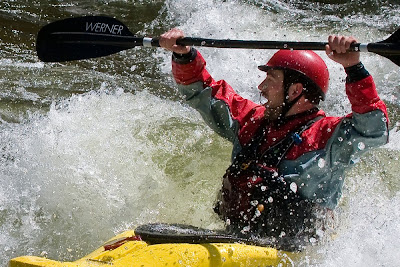 For more, go to my smugmug gallery (click here), find the May 2009 monthly gallery and scroll about halfway down. There are actually two batches, from Saturday and from Monday. Saturday was more challenging because it wasn't sunny and bright and I had to increase the ISO to capture the action.

I wanted to share some pointers with you that might help when you get in an action shooting situation.

› test. Get the lighting, focus and composition set up in advance.

I can't say that I don't enjoy having an excellent camera like the D300. It lets me do some things that lesser cameras don't: but some of these features exist on earlier models (and even on Canon equipment -- LOL!). One great feature is the 6 frame per second high speed mode. And another is the ability to lock the autofocus on a moving target. That feature got me some razor-sharp images of fast moving targets. The trick to tracking moving objects is to keep them in the finder with the release button held halfway down. The computer in the camera will do the rest (sometimes! It can be fooled).

If your camera doesn't have this feature, one suggestion is to manually focus on a predetermined spot and shoot when the target reaches the spot. A higher depth-of-field helps too.

I chose to stop the action using a fast shutter speed. It was a bright, sunny day but when I set the lens to its sweet spot — f/8 — I got about 1/500 second, so I decided to crank the ISO up just a little. I set it to 400, which gave me shutter speeds around 1/1000 sec. I was going to slow things down and pan with the boats, but then I ran out of memory, so I'll save that for another day.

I thought about how to meter the exposures. Averaging didn't work well (I tested it). The excessive brightness of the sun reflecting off the water swamped everything, so I went to spot metering. The D300 lets me move the metering spot off-centre, so I did: I moved it up and to the right, which is mostly where I would put the subject when I composed the shot, so I was usually metering on the kayaker or the boat. It didn't always work, sometimes I composed the photo differently; but it did most of the time. Still, in the end, the bright water did get in the way. Photoshop to the rescue.

When I got home and downloaded the almost 300 images I had shot, I wondered how I was going to decide which ones I liked best. I don't use LightRoom, I prefer Adobe Bridge, but both of those programs will let you flag images. I set the slideshow function in motion, with my hands hovering over the keyboard. Pressing the number 1-5 while viewing an image assigns that many stars to it; pressing ctrl-delete trashes it. Anything soft focus went immediately in the trash.

I assigned "1" to any image that was vaguely interesting for later review. "2" was used for what I thought was a better picture. "3" was for one I definitely wanted to work on, and "4" and "5" were reserved for images I absolutely loved. Out of all those pictures, I gave two 4's and one 5: they happen to be the ones above. The first one got the 5.

Then I went back and looked at the "1's". I upgraded a few. Then the "2's". Same thing. I ended up with about 80 pictures rated 3 or better. I opened two new folders, called "selected" and "alternate" and sorted further. Sometimes, with burst shooting, I had 2 or 3 very similar pictures: one was selected, the others moved to the alternate folder. There were several shots that told a story: a kayaker capsizing, with half a dozen images of the event. I moved those to another folder called "sequences". I actually have those still to work on; I want to do composites or storyboards with those.

Now to the editing. I won't bore you with excessive detail (OK, OK, I already did! But I think the workflow is important when you have several hundred shots to go through) but I will comment on one more trick. In Camera RAW 5.0 there's a great new feature: an adjustment brush. On almost all of the pictures, I used it on the kayaker's face in order to boost the brightness of the face. It works really slick: you paint an area with it then set the attributes for the painted area: exposure, brightness, contrast, black point, etc etc. The face is almost always in shadow (I avoid shooting with direct sun on the face) and it needs a couple of stops more light.

Most of the shots needed some white recovery to minimize the blown out whites on the water. So I created a default correction set and used it almost all the time. Once I had the image in Photoshop, it was a matter of cropping and saving. Nothing fancy.

By the way, the sharpening and other tools in Camera RAW are soft. By that i mean that their effects are subtle even when you crank them up fairly high. You can rarely overdo it. Try it, you'll like it!

So I bent your ear enough. Watch this space: next time I shoot there, I'll try slower exposures and panning with the boats. That will make the images more dynamic, some hints of motion.

Here are a couple more images to enjoy before I go away. 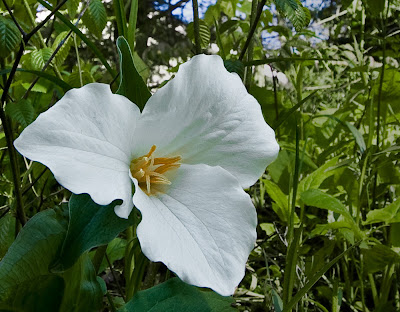 Trillium shot with my ultra wide-angle lens.
I altered the colour of some of the dead foliage in the background. 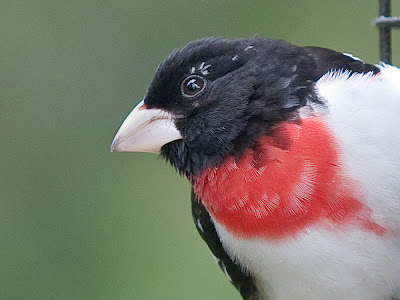 Posted by Glenn Springer at 7:02 pm No comments: Links to this post

Springtime and other stuff

I'm still not feeling very creative. But I have been out a few times to shoot some pictures, and I thought I'd share some of them with you.

If you're afraid of spiders, close your eyes: 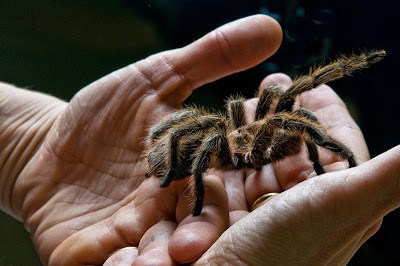 The Richmond Hill Camera Club hired a company to come in and set up a bunch of "critters" for us to photograph. It was a well-choreographed event where some eight stations were set up and about 40 photographers had a chance to shoot what they wanted. The best part about it was that they set up strobe lighting with soft boxes for each setup and provided a remote trigger so that the photographer at the setup could trigger the flashes.

I used their setups some: but I also tried different lighting and my favourite was to use my SB-600 flash off-camera and control it in commander mode -- something the Nikon D300 does well. I usually held the flash in my left hand, low and up in front of the camera, and I usually had the Gary Fong diffuser on the flash to soften the light. What I like about ihis arrangement is that it does cast a soft shadow, to give a 3D feel to the subject and it brings out the texture.

THere are a bunch more "critter" shots from that evening in my April 2009 gallery here.

Aside from that, I have been out shooting a bit more stuff. I found a waterfall -- actually a white water park -- near my house in Minden one day, and took a few shots there and of the "bazilliums" (there are bazillions of trilliums in the woods in May) nearby. There are kayakers who frequent this water on weekends, I'm going to try to get some of them on digital film this weekend. Here are a few shots from that day: 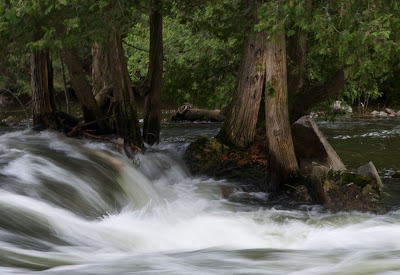 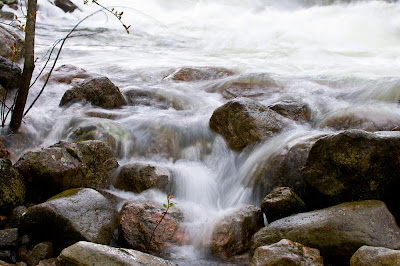 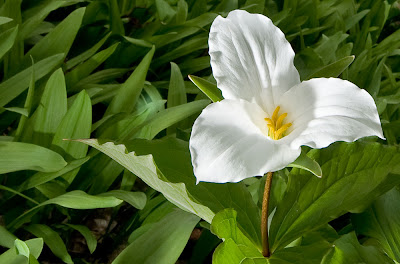 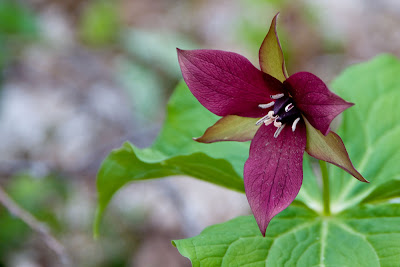 Again there are a few more of these images on my SmugMug gallery here.

OK, a couple more images to share. I was asked to shoot the new Kimco scooters at Humber College and while doing so, Marshall (one of our Chief Instructors) came by and we did a few action shots. The marvellous selection tools in Photoshop CS4 made a closecut selection quick, accurate and easy so I superimposed Marshall and the bike on another picture. 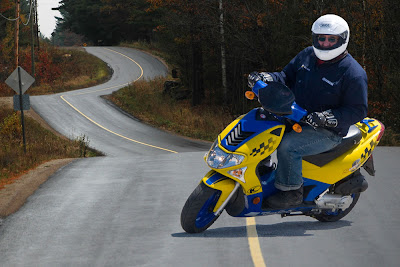 As mentioned in the text, Marshall was riding in the parking lot at Humber College. I superimposed the closecut picture over a shot of one of the nicest riding roads in Ontario, Muskoka Road 13 out of Bala.

And finally (hopefully you are disappointed, not looking forward to seeing the end of this posting...) I was on my way to an early morning meeting when I was greeted by a very misty, foggy morning. But the sun was up, and visible in the fog. It was interesting that the thickness of the mist made looking directly at the sun very pleasant and I drove for probably 15 minutes looking for a place to pull over and get a good image. I was resigned to the fact that I may not find a spot -- by now I was on the 404 highway; then out of the gloom the Slovak Cathedral of the Transfiguration in Markham appeared. I pulled over and took a few images. When I opened them in Photoshop, I couldn't decide how I wanted to render them. I tried a bunch of different effects, and I kind of liked these. 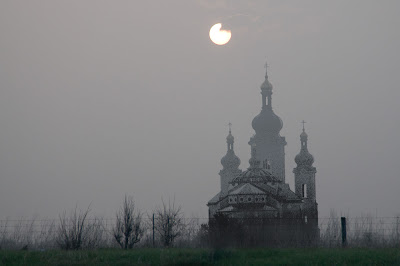 I created a threshold layer and blended it into the original image to produce this textured effect. The saturation on the grass was increased. The image below was done similarly, but with higher opacity. I left it in colour instead of converting to black-and-white because I wanted the subtle shading in the sun to appear. 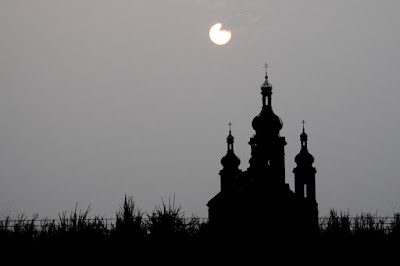 Posted by Glenn Springer at 7:56 am No comments: Links to this post