Waste of money
I always wanted to have a variable Neutral Density filter. Well at least since I saw one up in Wawa -- Brian Barker had one. His was made by Singh-Ray and cost about $350. Ron had a Lee system with a filter holder and several glass insert filters and that was substantially more money.

I researched and shopped around and found another source, a company called Fader and by most of the reviews I read, it wasn't bad. They ran about $120 on eBay and elsewhere, so I went shopping. What I found was another one made by POLAROID. Half the price! $55! How could I go wrong?

Well, I could have my $55 instead of a useless piece of glass.

First of all, I found out (after the fact, of course) that Polaroid isn't the Polaroid Corporation that we knew and loved. Somebody bought the name and sells the branding to unknown producers in the Far East.

The way these things work is to mount two polarizing filters so that they can rotate relative to one another. When they are at their maximum setting, you get as much as 10 stops attenuation. The same shot that you would have made at 1/60 second would be at 15 seconds or so! Think about the possibilities for waterfalls! For thunderstorms!

When you look at the filter, it appears to be well built. It has a useful collar on it, something I wish they would put on regular polarizing filters so you could turn them without overtightening them on the lens, and still be able to unscrew it when you need to. The thread is a bit fine so you have to be careful screwing it onto the lens but the build quality seems to be pretty good.

All good, until you try to take a picture with it.

First I tried it with my wide angle lens -- I have two lenses that it will fit without a step-up ring, my 12-24 and my 70-200. With the wide angle you get a huge interference pattern that looks like someone is holding a big black cross up in front of the lens. So I switched to the long lens.

The word "SOFT" does not even begin to describe the results I had with my first test. Focusing is difficult, etc etc but trust me when I say I set it up carefully. NOTHING is in focus. Exposure is hit and miss, but you can deal with that by bracketing. But folks, if I got a water glass from my kitchen and held it in front of the lens I'd get sharper pictures.

Maybe it wasn't a fair test. I'll go out today (if it stops raining) and try again. But I think I just bought myself a $55 coaster for under my coffee cup.

I guess I'll never learn. I have to walk the walk, not just talk the talk: DON'T BUY OFF BRAND STUFF. You will regret it.

If you're tempted to buy a cheap variable neutral density filter, stop and send the money to my PayPal account instead. It will be better spent if you just give it to me.

That said, I'll try again and try to get some documented pictures to show you next time.

Some other pictures:
Here are a couple of pictures I did on the weekend, while teaching the Motorcycle course at Humber. Both of them were enhanced using Topaz Adjust in Photoshop.

I don't normally take the camera out, I'm being paid to teach not shoot pictures. However, they asked me to get a few shots of the old guy. He was 87, getting his basic motorcycle license. Guess it was on his 'bucket list'! How can you NOT photograph that face?

This was one of my fellow instructors preparing the students for their license qualification test. I removed his name from the nametag on his hat. By the way, I was reflected in the left lens of his sunglasses. Can you say, "content aware fill"?

It rained all day today, including a couple of thunderstorms. It cleared up and quieted down around sunset and I got this shot. I know it's kind of ordinary, but it says a lot about why I live up here.

Next weekend, some friends are coming up to shoot Trilliums and other stuff, and maybe learn a thing or two about shooting HDR's (I know, I still haven't finished that article! Any Day Now!). Come join us. May 7/8 up in the Haliburton Highlands. Shoot me an email if you're thinking about coming up.

Posted by Glenn Springer at 8:43 am No comments: Links to this post

Love it or hate it?

I pulled over on the roadside today because I was taken with this rockwall where the cold nighttime temperatures had frozen the water dripping off the wall. The ice glistened in on-and-off hazy sunlight.

I turned around and saw this little stream coming down with some great frozen water in front of it. I went home and got some neutral density filters to re-shoot it. A wider shot didn't work -- too much brush and rock.

And then I looked around and saw this:

I shot 5-shot brackets and merged them to HDR in Photomatix. I did some more work in CS5, including a touch of Topaz Adjust. Initially I loved the shots and now I'm not so sure. I think they're TOO sharp and have too much detail.

What's the consensus? Would you have shot these differently? Or handled them a different way in Post?

By the way, on the last shot I used a non-destructive dodging/burning technique that I picked up somewhere recently, damned if I can remember where. But I love the technique and wrote it up in my tech blog. I searched my archives and can't find it. I'd like to attribute it but can't recall the source.
Posted by Glenn Springer at 2:59 am 2 comments: Links to this post

I wonder why I tend to think in song lyrics? Early Alzheimers?
Where was I...

Yesterday (Saturday) was a beautiful day. It must have hit 17°C and the sun was shining. I debated taking the camera out in search of great stuff to photograph, but I decided that my motorcycle was more in need of attention! So I took it out of storage, prepped and safety checked it, and went for a ride. Then I came back and... went for another ride! It's exhilarating to be in the wind again!

I did stop at a colourful place just off the highway where they do maple syrup the old fashioned way and asked the elderly lady if I could come back the next day with my camera. She was somewhat hesitant, but reluctantly agreed.

On Sunday (today), it rained. The maple syrup place was closed. I did go back — and I drove into Minden and looked at some potential photo ops: but didn't get out of the car in the driving rain. So I came home.

What does one do when it's raining? One shoots indoors! So I set my studio up and jury rigged the light tent so I could light it from underneath. Sort of a wonky idea,but I did it and then set out to test it. Here's the setup 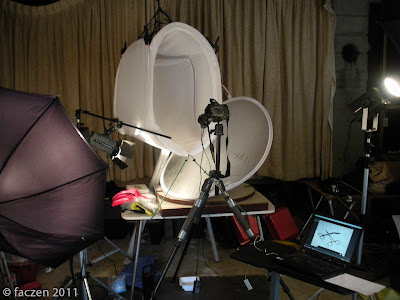 My strobes are too bright so I set them up to reflect light into the tent rather than lighting it directly. Even so, exposures were f/22 at ISO 100. Notice the computer at lower right. I tethered the camera to the computer through Lightroom 3. It works effortlessly. Here's what the control panel on the computer looks like:

I was just testing it by shooting at the screen of the computer itself. The big button on the right is the shutter release. Click it and the camera takes the picture! A few seconds later, it appears on screen as big as you want it! Very slick.

The light tent works. I have to do a bit more setup if I want to do pure high key shots, but here are some examples of what I shot this afternoon. 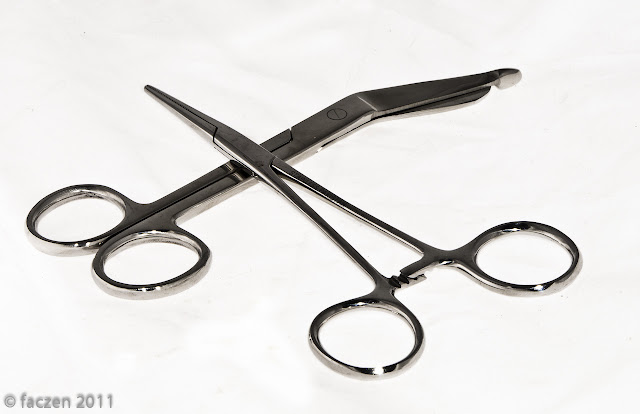 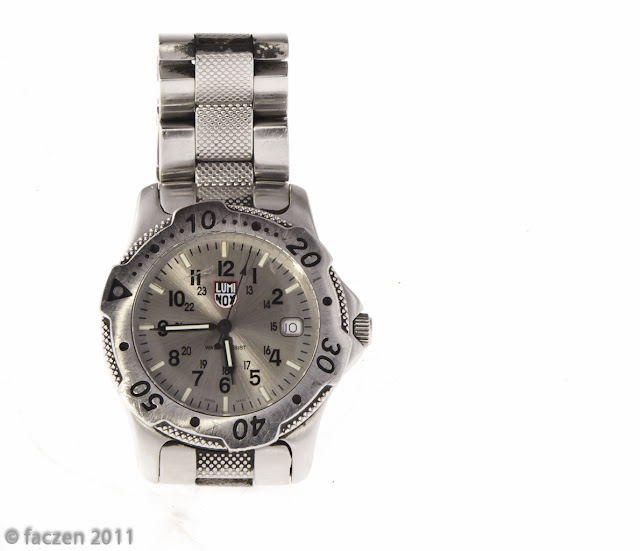 I thought I'd try a couple of challenging shots. Light bulbs are challenging, when they're on a white background. Here: 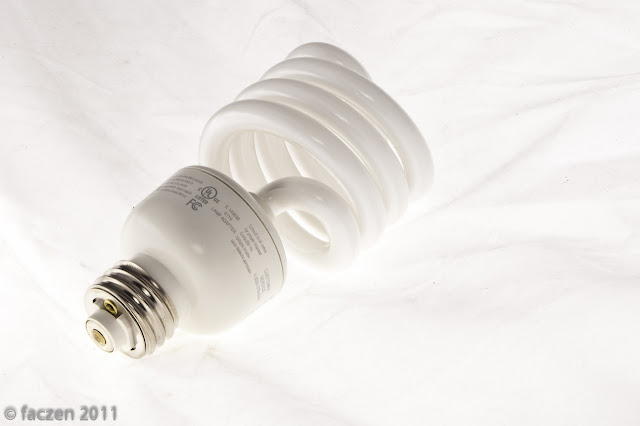 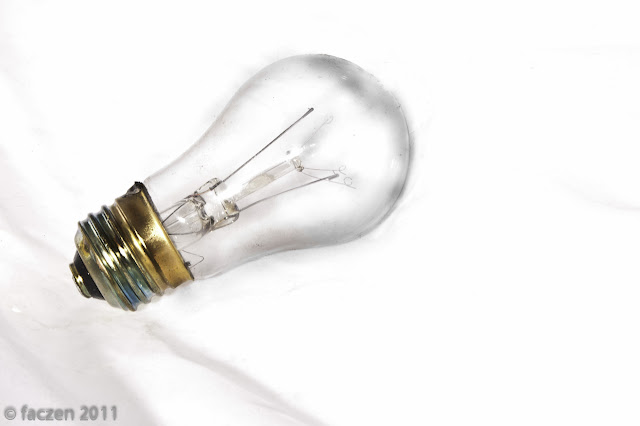 This last shot is the only one where there was any Photoshop work done. And the only thing I did in  PS was to remove some dirt on the top of the bulb. All the rest of the work on all of these images was done in Lightroom.

I'll do a little writeup on shooting tethered in my technical blog, but probably not tonight! Drop back in a couple of days from now to have a look.

Last time I showed you what my bathroom looked like in the middle of the renovation. Here's the before-and-after. 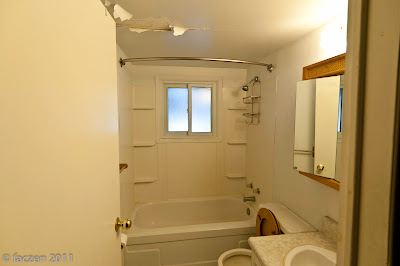 Water damage from a roof problem is what prompted me to get this done. 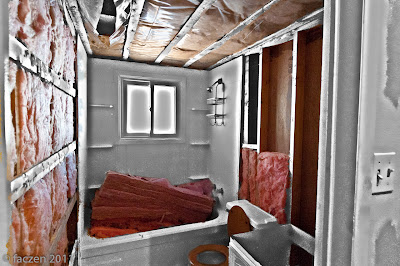 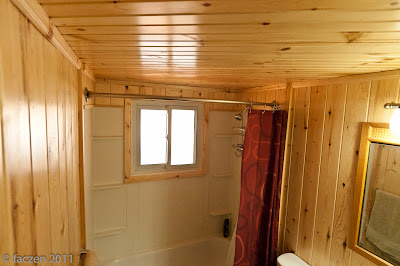 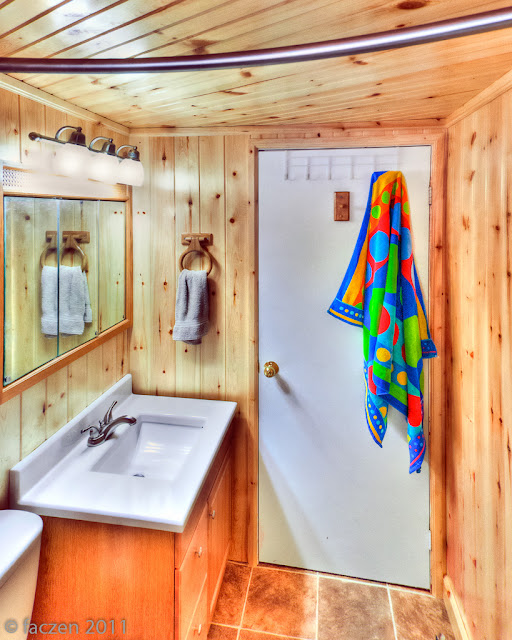 The final product.
Expensive? Yes, too much. The job went over estimate (what else is new?) but the workmanship is great and I love it. Well, about as much as you can love a bathroom!

A couple of notes: the last image is (surprise, surprise) an HDR. I wrote up the procedure how I did it on my technical blog here. If you're getting into doing HDR's you may want to read it.

This is NOT the promised HDR article from the Boynton House conference. I'm still working on that, but the current one will tie nicely into it.
Posted by Glenn Springer at 8:51 pm 1 comment: Links to this post