...if I told you that the reason you haven't read a blog post from me since April 4th is that I've been too busy out there taking pictures in the burgeoning spring weather. Not true. Fact is, I'm going through somewhat of a dry spell, photographically. There are a few reasons, maybe by writing them down they might go away.

While it might be Spring on the calendar, it's just getting started here. I'll admit that the last few days have been nice but where I live, the grass is still brown, where you can see it through the melting snow piles (not fair, I suppose. The snow's mostly gone, but the ground is brown and soggy, muddy). Just not interesting...

In Toronto, spring has sprung but they don't believe me when I say the lake here is still mostly ice covered. This winter, the ice was thicker than most people can remember – my neighbour said over 30" thick in places where it's usually half that – but I wouldn't be venturing out there, it's paper thin in places!

But here's the good news: the birds are back. The other day I saw (for the first time) a pair of sandhill cranes in flight, 'way too quick to get the camera out but Gawd, those are elegant birds in flight! All the usual suspects are back, turkeys galore, robins, osprey, mourning doves, American goldfinch, and the usual blue jays, nuthatches, chickadees, woodpeckers and grackles. I'm looking forward to heading down to Carden Plain in a couple of weeks.

Also speaking of raptors like owls, our outing to the Canadian Raptor Conservancy is now booked and full up. Looking forward to that too!

I find myself looking at images online for inspiration and not getting much. After a while they all look alike. I want to make my work stand out from that crowd, so I'm waiting for the creative juices to flow.

You ever have so much to do that you don't know where to get started? That's where I'm at right now... I'm on deadline for both a presentation and judging a large  competition... I really have to stop saying "yes" to people! I'm working through some other issues too, which leaves little time for writing (I really want to get back to my creative writing!) but I'll be back, so don't go away mad.

I did get out to shoot one assignment last week that I thought I'd share. My friend Styles called and asked me to do a headshot for a musician he's working with. I only had an hour to shoot, but spent a day so far on post-processing.

Just for fun, here are some shots I liked for ME, not necessarily for him.

But this is the image I liked the best from the shoot. Styles said they might consider it for a CD wrapper on an upcoming album:


The other thing I've been doing is painting. Here's one that's almost done, using a technique called 'sgraffito' which entails scratching off a fresh wet paint layer to reveal what's beneath it. 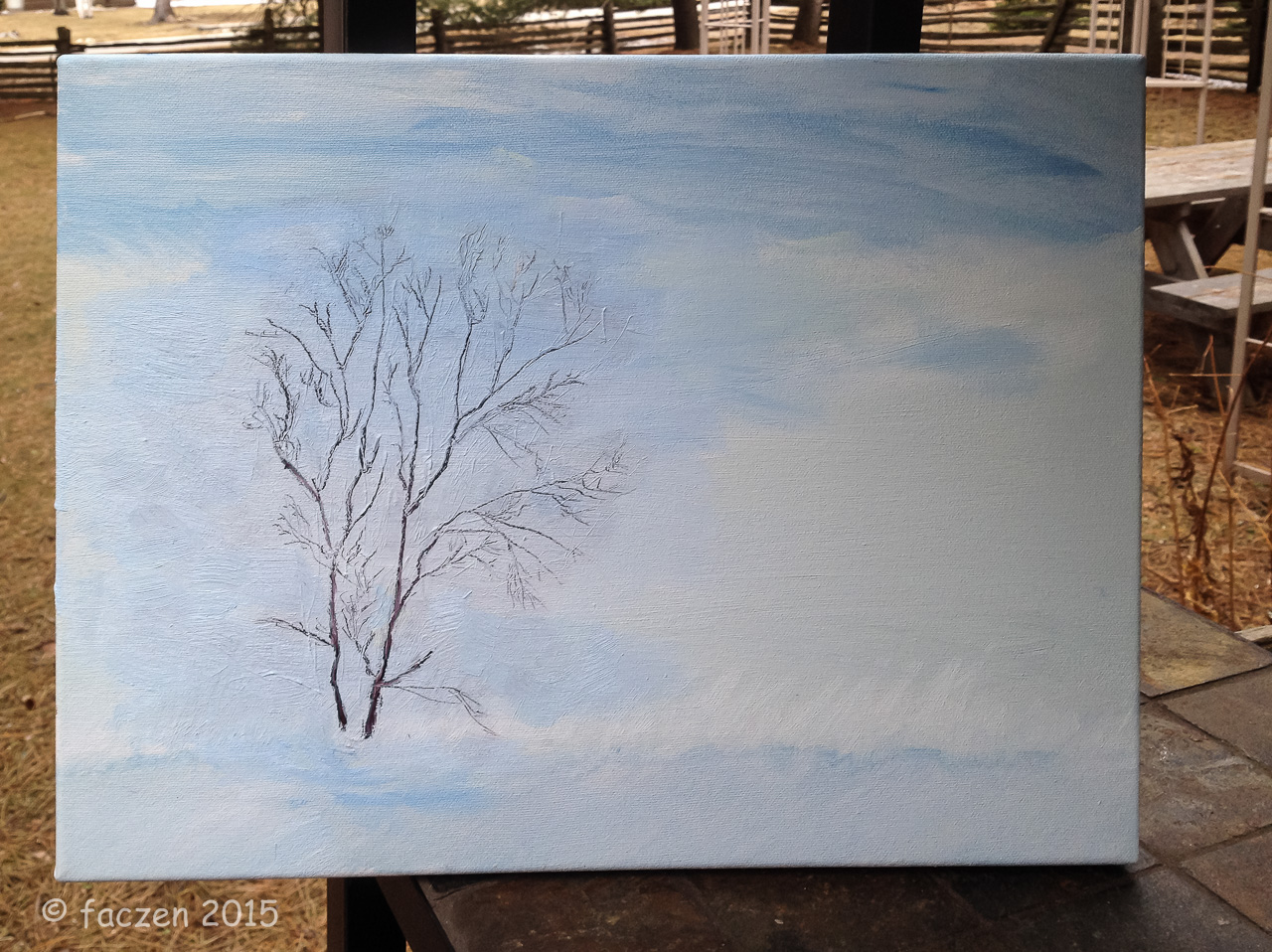 I did take the easel and paint stuff out to Ritchie Falls the other day. It's a LOT more difficult than I'd imagined! I took some photos from the same spot, which I'll show you when the painting is a bit further along. 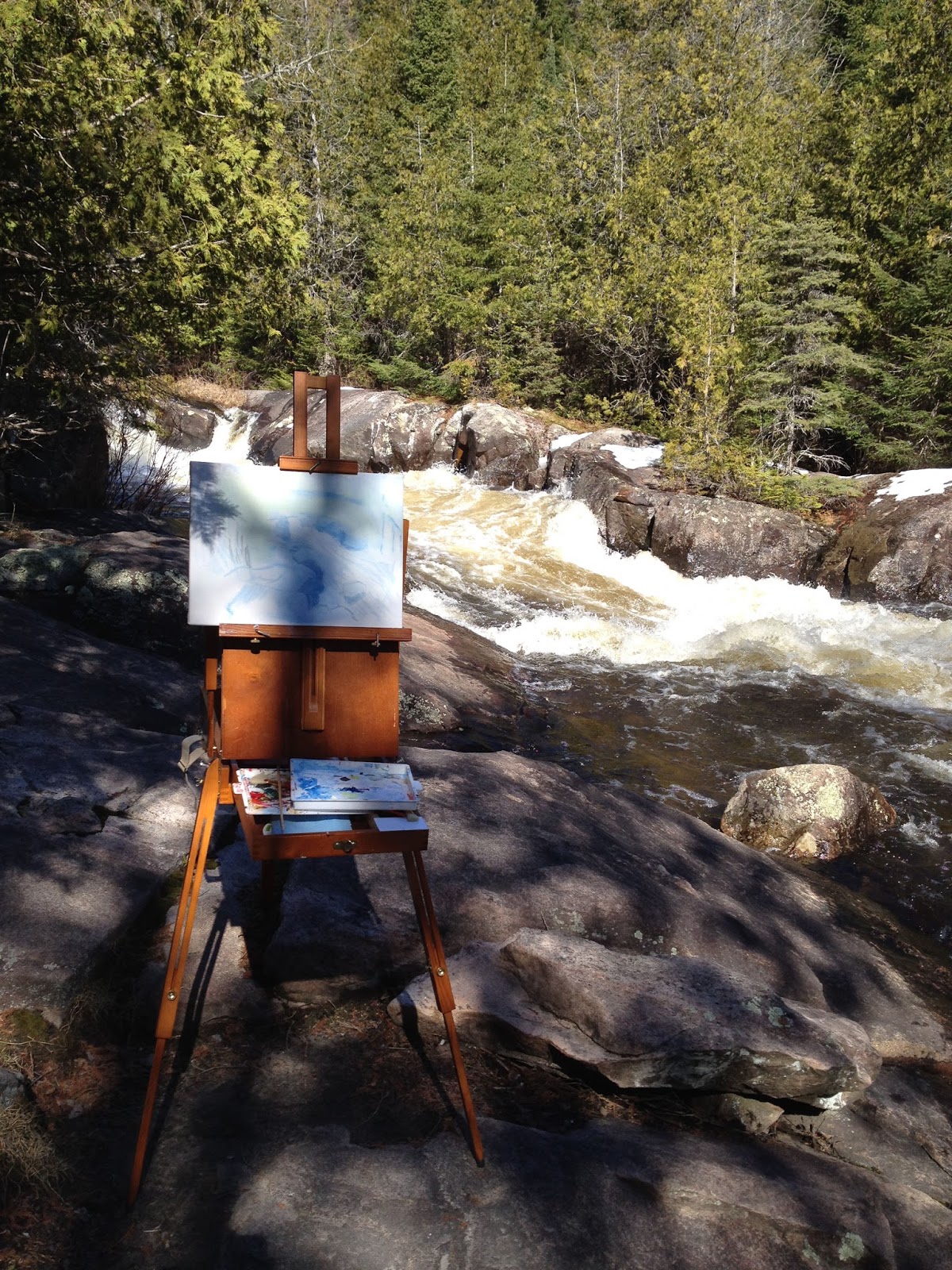 It must be Spring...

No surprise, or it shouldn't be. I've seen snow coming down as late as early May!  Last night there were flakes of the fluffy white stuff that accumulated a few inches but the temperature is hovering around the freezing mark and it's melting. The maple syrup people aren't happy, nights are still getting down to the -10°C area and the sap isn't running, but it will get there.

Today I saw the first American Goldfinch pair at my bird feeder. Robins shouldn't be far behind. And a Cackle of Grackles is out there making a ruckus and scaring off all the other birds. The chipmunks haven't come out yet but the gulls are back at the landfill, competing with the crows for the delectable morsels of disgusting garbage... we've had bald eagles there all winter but I haven't seen them in a few days.


There was a red-winged blackbird at the feeder this morning (April 3) but he was too shy to let me take a picture. Remarkable because (a) it's the first one this year and (b)the red patch was outstandingly brilliant – almost fluorescent,

The ice fishing huts are off the lakes. Well, off our lake anyway... law says today is the deadline for removing them. My neighbour Jim Walker stopped by to chat, he says there's 30" of hard water in spots! That's a LOT. It's been a rough winter, very little snow but very cold.

It's the "Ugly" season for us landscape photographers. If you don't like muddy brown vistas, naked trees and wearing rubber boots that keep you dry when you step into deep gooey mud puddles, you'd best be patient. It'll get green again soon! And the flowers and buds will be out, bringing with them that sneezy drippy season if you have allergies and those itchy lumps cheerfully provided by our national birds, the blackfly and the mosquito!

Some people make it look so easy, but it's not! My regular readers will know that I've finally, after all these years, picked up a paint brush and started putting pigment on canvas. But it's really not easy.

I have a decided advantage over some of my other painting newbies: I get composition. I have a feel for light and how it affects the subject. But what I'm struggling with is putting lines and shapes where I want them, in the way I want, and mixing colours.

I've learned that you can make any colour out of Red, Blue and Yellow paint. You can tint it with white or shade it with black (frowned upon: you want black, you "make" it!), but I haven't been able to make the same colour twice! You mix up some, then run out and want to make more... good luck matching it!

Thing is, I ruined this painting. I'm trying to fix it but it's not like rolling back the develop instructions in Lightroom or removing offending layers in Photoshop. Either I have to paint over what I've done (after it dries) or add to it, or just throw it away and start over.

I paint (and photograph) in an impressionistic mode. Two reasons: I haven't figured out how to paint fine lines yet, and I'm lazy and just want to stand back and throw paint at the canvas. I haven't got the nerve up yet to try a complex subject like a tree, but that's my next step.

It's fun, but it's hard. My goal is to be able to go out and paint "plein aire" some time this spring. Stay tuned... 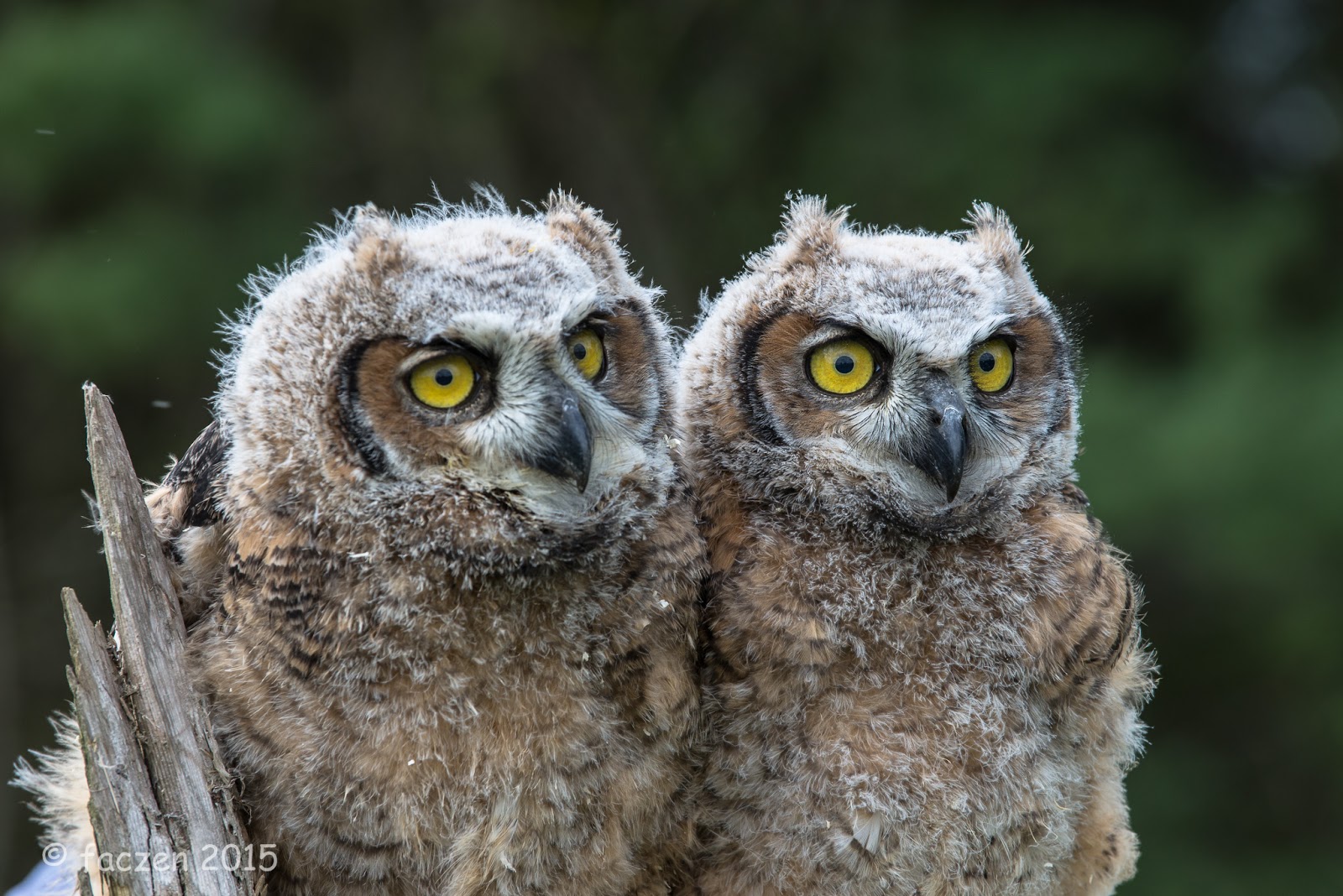 These pictures were taken at my last visit to the Canadian Raptor Conservancy on Lake Erie just West of Port Dover. I've booked a return engagement for Sunday, May 10th for a group of 10 photographers. Cost is just $50 each plus tax (Right now I have about 7 people confirmed and a bunch of "maybe" folks. If you want to go, you need to send me an email RIGHT NOW.

Understand that this is NOT a teaching workshop: I'm not making anything, just facilitating the field trip. Priority goes to Haliburton Highlands Camera Club members.

Posted by Glenn Springer at 3:57 pm No comments: