Get out of your comfort zone!

I’ve said it often enough: I take great pictures of Rocks and Trees. I don’t take people pictures, I don’t do events. Well last weekend I decided to try something different. I’m glad I did, because I got my creative juices flowing.

I've started shooting more pictures of people. I'm finding it quite rewarding. During the Trillium weekend I think I shot more pictures of my fellow photographers than I did of the landscape. Certainly more than I shot of the beaver swimming across the pond, unlike some other people! This past weekend too — I decided to stretch myself and as a result I'm feeling less stale.

I was in Montreal for a memorial for my father and I decided to drive home via Ottawa. The 417 has a lot in common with the 401: total boredom. But after Ottawa it’s another story. The GPS took me up through Renfrew, then turned me along Highway 60, 132 past Calabogie and eventually 28 through Bancroft. I’d been on those roads before – they’re renowned motorcycling roads. A very enjoyable drive, even in a car – I recommend it. But that’s not what this is about.

At the last minute, approaching Ottawa, I decided to take an hour or so to visit the Byward Market. It’s an outdoor stall-type thing over several city blocks. At this time of year, I guess, it’s mostly produce and flower vendors, with a sprinkling of other tourist stuff as well. I parked, mounted my “walking-about-lens” (24-120) and set out to see what I could see. It didn’t take me 10 minutes before I changed to the 70-200 and I never switched back.

The 70-200 allows me to be a little less – OK, a LOT less intrusive. I can shoot from 20 or 25 feet away without getting in peoples' faces. Add to that the better perspective and the great isolation you get with the shallow DOF at f/2.8 and I'm reminded why this is my favourite lens.

I decided I would take people pictures. Candids, street pictures. Stuff I don’t usually do.

I’m shy. I asked the first interesting guy if I could take his picture. He was made up in whiteface and it turned out, was a sort of a street performer. He asked me for money. I said no, he grimaced and grudgingly agreed to be photographed. I took a couple of shots, and caught his ‘act’ later – he complained that ‘everyone is taking pictures but nobody is paying’. Right. DO SOMETHING, bud. He just stood there and pretended to be a statue. For this he wants payment? 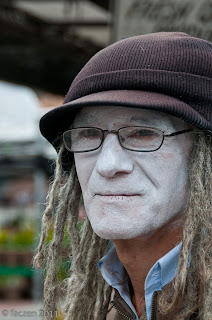 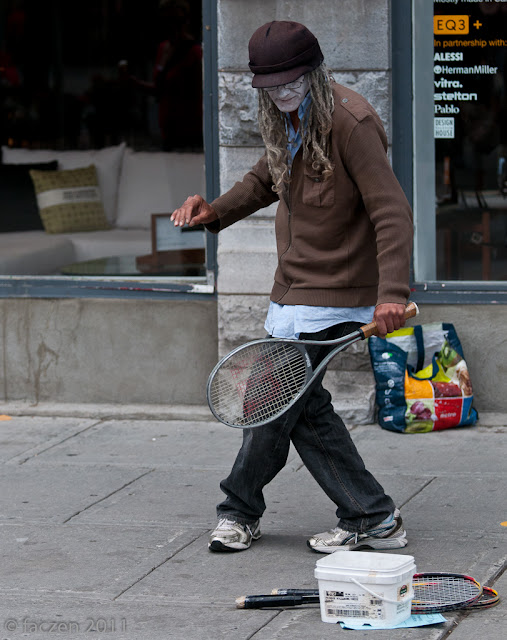 I took candids of other people, but didn’t have the nerve to ask them if I could take their pictures. Again, I have to learn to do that. Here are a few candid images I took. The first one all by itself tells me I have to do this more often! 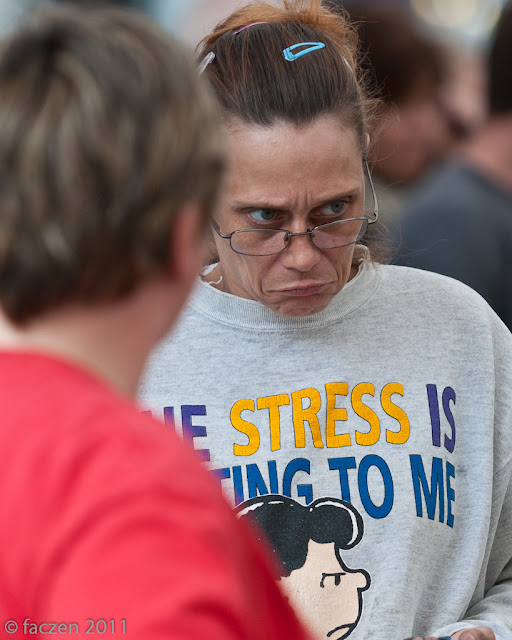 Sometimes you get lucky. Check out the expression on her face and compare it to her shirt. 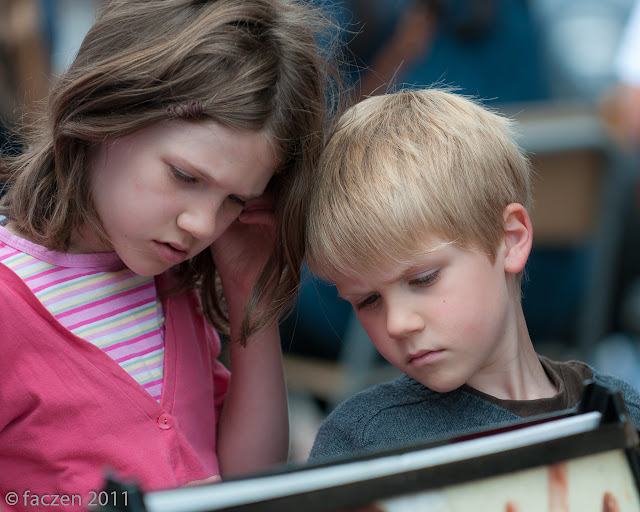 These kids were checking out the menu board while waiting in line at the Beavertail concession. 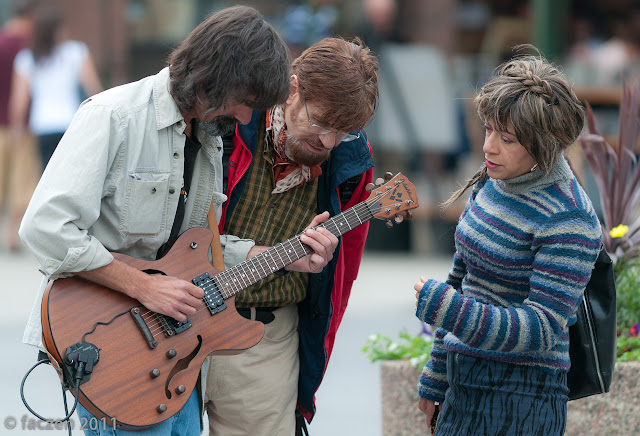 Street guitarist showing a couple a riff that he was playing. To me, this picture tells a great story.
There was another street musician that I connected with. Well actually I threw a Toonie in his case and told him he was in the wrong city — he should have been in New Orleans. So he posed for me for some pictures as he played. He wasn't that good, but he did have some blues in him. The "Pink Panther" theme on the baritone sax sounded pretty good! 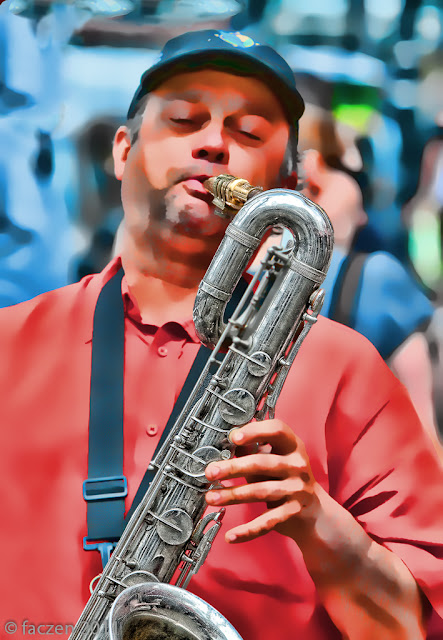 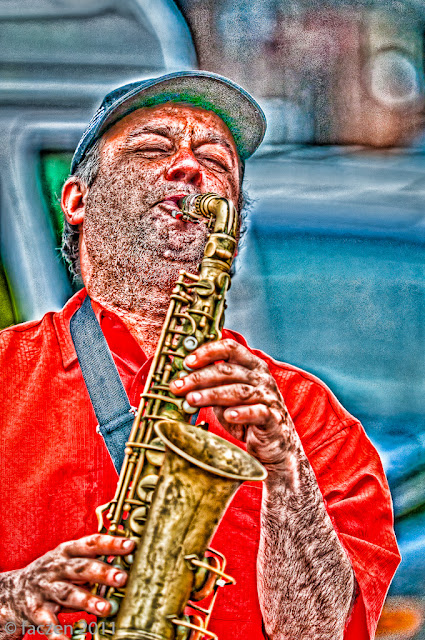 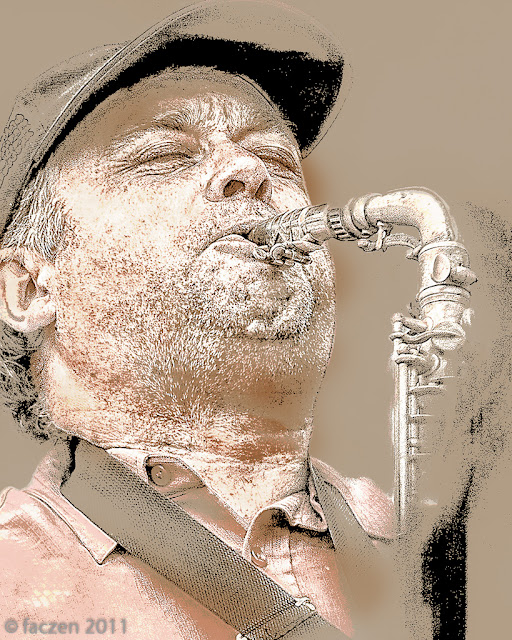 OK, I admit to doing a little Photoshopping on these pictures. Just because I changed my subjects didn't mean I had to change my style!
Finally I saw some great patterns in the produce for sale and took some of those shots. 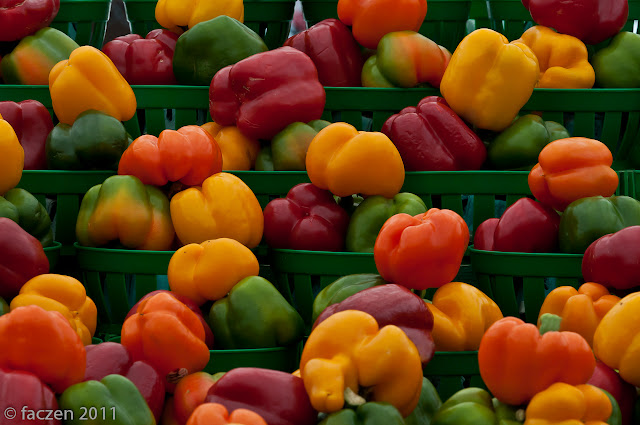 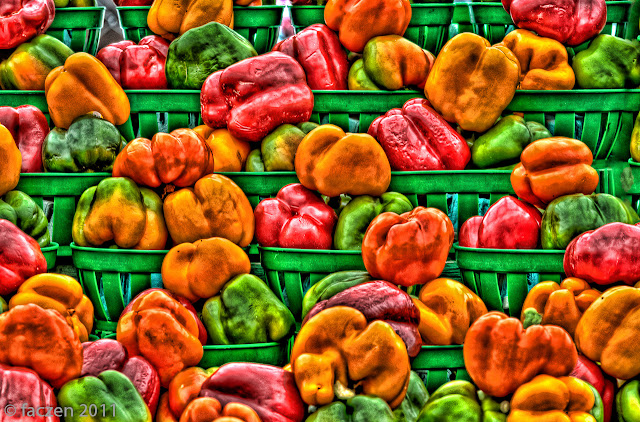 Same image, a little Topaz. OK, a lot of Topaz. 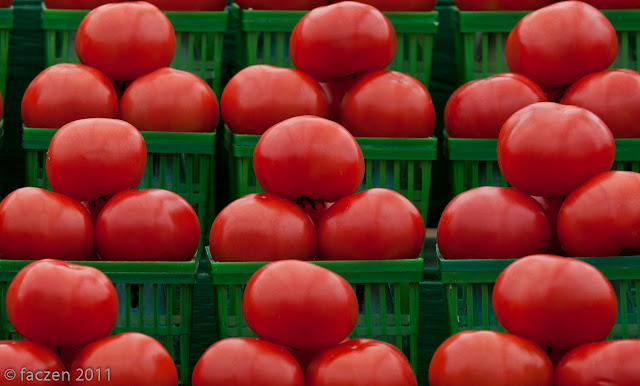 But the most interesting ones were the people pictures! I still did my Photoshop and Topaz stuff but there’s a whole world out there of interesting subjects to photograph. I have to learn to be less shy, and ask permission to shoot pictures of people. The worst thing that can happen is they say “no”, right?

So I’m going to try to do this more. Expand my horizons, do stuff I haven’t done before. What about you? Are you ready to leave your comfort zone?

On the way into Toronto on Friday, I came across this field of Trilliums. The difference was, it was on the verge of someone's property and they had obviously groomed the area, so there was no plethora of fallen dead leaves, no weeds, no messy twigs and branches.

I spent about half an hour shooting (I was under some time pressure). Besides, the blackflies were just out of their winter hibernation and they were voraciously hungry for human flesh. I had left my tripod at home, but I had an old one with me that I use as a stand for my external flash. It has a broken leg latch, but better than nothing!

I actually painted this one using the mixer brushes in CS5 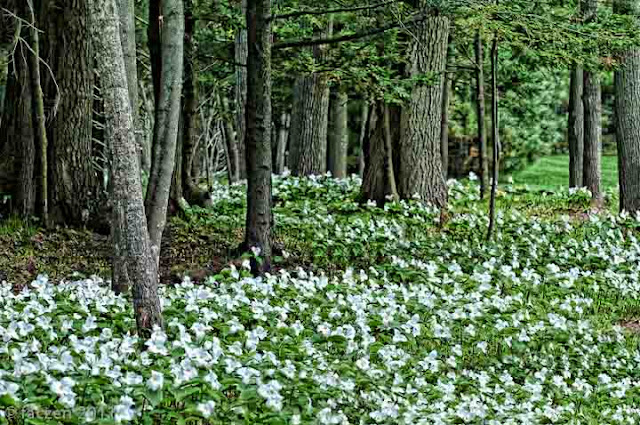 CAF (Content-aware Fill) was used to add flowers in the foreground. There was a gravel path there. I used Topaz Adjust to bring out the detail. 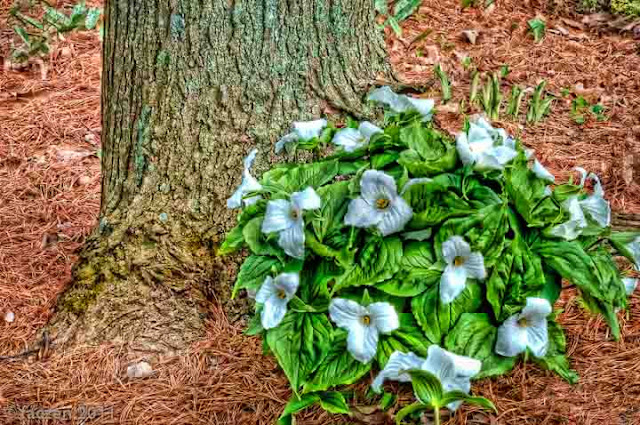 Obviously I used Topaz Adjust to bring out the detail. Not much else -- It really did look like this!

This is kind of over the top but I just liked the look. This was a 3-exposure HDR processed in Photomatix Pro.
Enjoy!

A weekend shooting pictures with friends

This weekend was supposed to be a workshop for new DSLR users but (a) I left the advertising too late and (b) I had totally forgotten it was Mother's Day, so I didn't have any (paying) takers.


I did have a few friends come up to shoot trilliums. They were just barely open -- we were a few days early -- but we had fun anyway. Here's one shot I worked on, with remote flash backlighting and a reflector dish out front, and some (ok, more than "some"!) postprocessing: 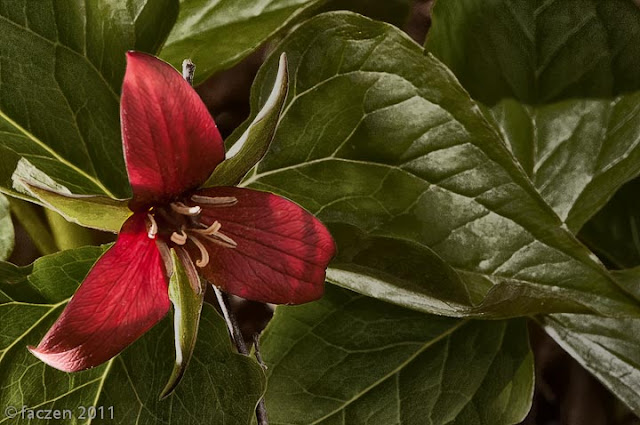 We went out at dawn on Saturday in a huge amount of mist and fog. You always get some shots, though and it was worth it -- more for them than for me. Here's a shot I did of Shannon shooting a photo. The water levels are as high as I've ever seen them so this picnic table site was flooded. 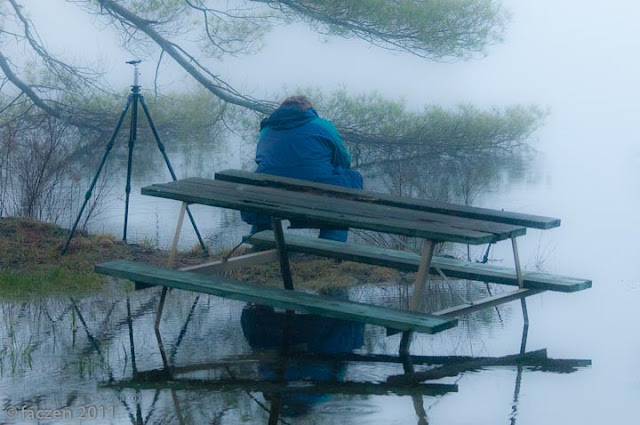 Saturday night we stayed up for sunset shots, and were disappointed. A clear sky, no good colours. But we hung around until the stars came out. This is one of my images, taken above the dock at the Red Umbrella Inn across the road from my house. The moon was just a crescent, but there's no sign of anything but a round shape in this image. It overwhelms the lighting, of course. The orange glow on the horizon has to be the remnants of sunset, because the nearest town is about 60km away in that direction! We were playing around with a flashlight, painting the trees with light during the 30-second exposures. It may not have been necessary in this case. 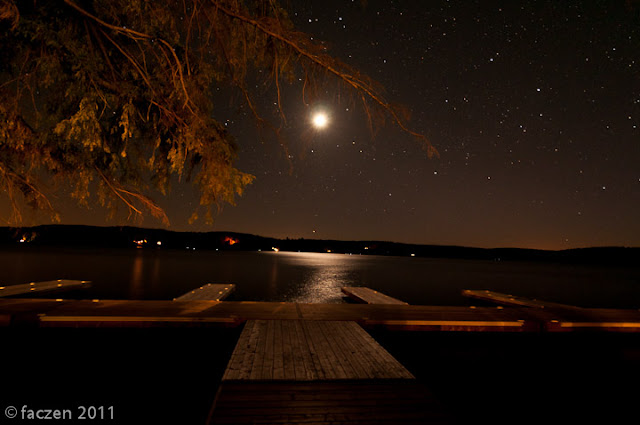 Thanks to Ron, Shannon, Linda and Liz for making me get up and out at 4:00 am! We need to do this again. And watch this space for my upcoming workshop series!

I downloaded a copy of NIK HDR Efex in order to compare it with Photomatix Pro and CS5 Merge to HDR Pro. There are some things I like, and some I don't but all in all, this is a program that provides more flexibility. Here are a few examples of images I worked on this week. 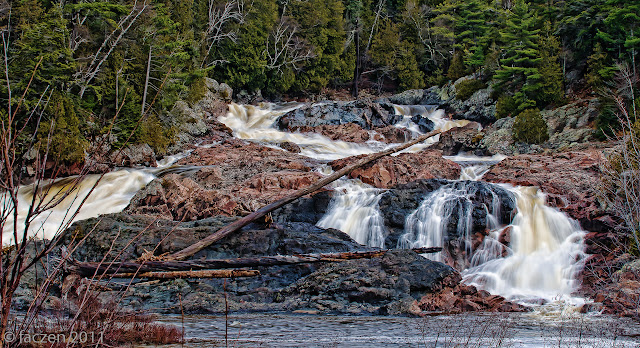 I had actually passed over this image before. I HDR toned it in NIK (just a single image, not a bracketed group) and did some additional work in Topaz. 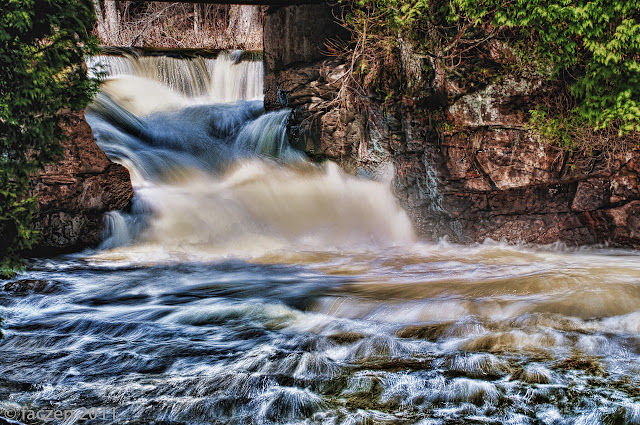 Speaking of waterfalls, here's Ritchie Falls, a bit closer to home. Again it's just one shot, edited similarly. The other significant thing about this shot is it was done with my new variable ND filter. The jury's still out on that. 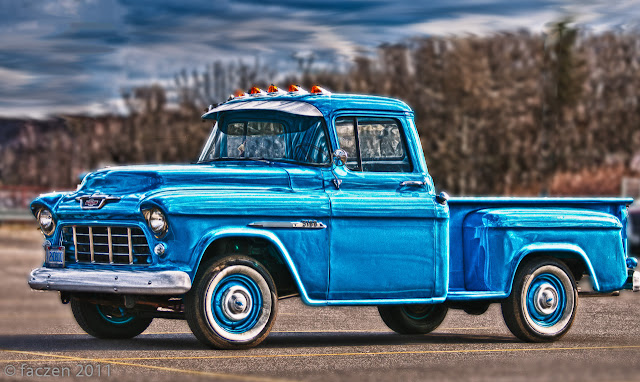 This shot, on the other hand, was a bracketed 5-shot sequence that I merged to HDR with NIK HDR Efex. I did a bunch more work on it in Photoshop — for instance, the background was a mess of wires and power poles. I blurred the background, brought the ground under the truck into focus, and did some painting in the sky.

To "close the show" today, here's a painting I made in Painter 11 from the mundane loon shot I posted last week. I have to re-learn that technique, it's a lot of fun. 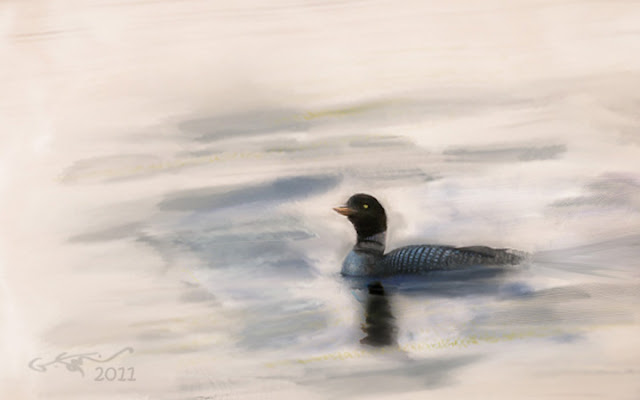 Off to shoot trilliums this weekend! Hopefully I'll have some interesting stuff to show you next time.