I went for a swim in the lake a couple of evenings ago and it occurred to me that swimming in the lake is substantively different from swimming in a pool. My dock is in a shallow bay, so your experience, where you swim, might be a little different than mine. So here are some (a)musing points

I just ordered a new set, ran right out of my last ones. I get them made locally and I have a wholesale account where I can deliver a set of 500 full-coloured, double sided, Aqueous finished cards for about $25 (shipping and taxes extra but if we combine orders...). Think about it. Your own pictures... 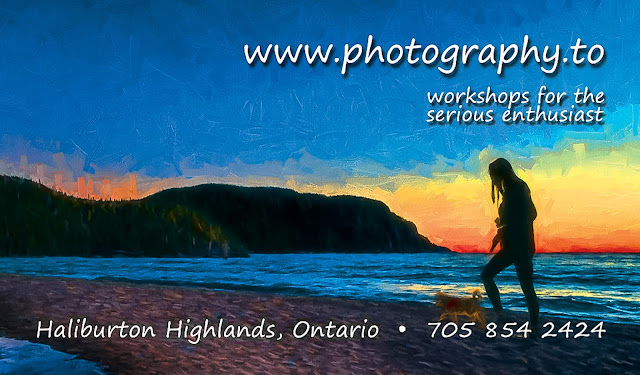 OK, truth time. I got my cards today. Hate them. The milky way image looks great on a lighted screen but hopelessly dark in print. The other side looks "OK" but it's not great either. It's not a quality problem with the supplier: they did their job. It was me. I had decided that I wanted a matte finish to the cards, not glossy. Nope. Also I didn't pay enough attention to the mid-tones, they're too dark. Also tiny detail doesn't work on a 2" x 3½" card. I should know better. Back to the drawing board. I'll report back when I get some new cards I like. But that shouldn't stop you! Just use a nice, bright, simple image.

The star shot I used on the card was taken at my friend Janie's place. I had planned to head up to Algonquin Park to shoot stars that night but dinner ended late and I was tired. It was July 1 and there were fireworks going on, so I just got the camera (and the bug jacket!!) out and did some shots down by the lake. I went back in and asked the ladies to turn the lights off for a bit because they were painting quite a bit of light on the dock and boat and I didn't want it in the shot.

I had to do a bit of work on the original to finish it for the card. I did a bit more work to make it a printable large size image. Here's the original, SOOC (straight out of the camera): 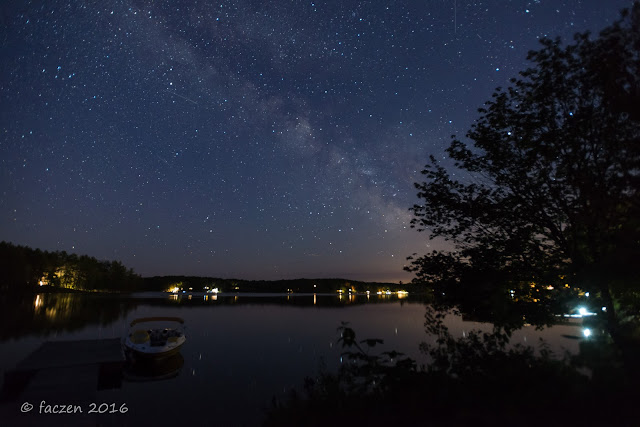 Aside from the obvious toning in the sky, and removing a couple of the hot lights, especially at right, I wanted to enhance the reflections in the lake and the distortion on the left side, caused by the wide angle lens bothered me, so I did some selective warping and rotation to straighten it up. I wanted a warmer saturation on the house lights too. Actually I masked in a flipped version of the sky into the water, then applied a ripple filter to soften it. A considerable amount of attention to detail. By the way, the finished photoshop file is over 1.5Gb in size! Here's the result:

The same night, on the way home, I stopped at the beach opposite 12-Mile Lake Church and did these shots:

Photographers constantly bemoan the fact that people don't want to pay for their work. "We'll give you recognition..."; "our thousands of viewers will see your work..."; "you'll get photo credit...". And the photographers are right: when was the last time you told a plumber that you would tell everyone how great a job they did (instead of paying them) or tried to use your photo credit to buy a coffee at Tim Horton's?

I'm constantly inundated with invitations to submit images for competitions. What better praise could one get than to say you were recognized in an International Salon or exhibited in a museum. I had four images selected for a juried show last year at the Agnes Jamieson Gallery in the Minden Cultural Centre and yes, I'm very pleased at the recognition and the positive reviews, but it cost me over $100 per image to print and frame them. I still have three of them here, one did in fact sell through the museum.

Newspapers and other media (including Network Television) encourage their readers/viewers to submit pictures and they never get paid. Facebook and YouTube are inundated with pictures and videos that people post for free. And photographers regularly complain when someone copies their work, which is inevitable. If you don't want people to steal your work, don't post it.

But the juried Salons abound. Just today I had another invitation to submit. But in order to do so, you have to pay them! In this case, $25 US per image submitted. I get that they have expenses to defray but why is it that the artist is the one who doesn't get paid? The company who runs the Salon makes money. Their employees are paid. Physical prints are displayed in a gallery and the gallery owner makes money. The director and staff make a salary. So does the mailboy and the secretary and even the kid who gets them coffee (which they pay for...). Not the artist.

That's not to say that there aren't legitimate competitions. The International Salon run by the Toronto Camera Club is in its 123rd year! Yes, you have to pay a fee to submit images but this prestigious event is different from the seemingly hundreds of imitators out there because (a) it's a legitimate and well-credentialed show, (b) a quality printed book of winning images is published and (c) it's run by a group not out to profit by the show. But when commercial outfits, including some well-known magazines, run such events for money, I have to question it.


For the record, I submitted a dozen entries to the 122nd International Salon and received seven acceptances (but no ribbons!). Dr. Ron had 12 acceptances and 4 awards! Impressive. This year I have accepted an invitation to judge the Photojournalism category for the Salon (I did two years ago as well) but new FIAP rules state that as a judge, I cannot submit images (even in other categories). :(

Anyway, I don't castigate amateur photographers for offering images for free or for photo credit – technically I fall in the same category, with my blog and social media postings and since I don't make a living from my art technically I'm not a working professional – but I draw the line when someone makes a profit from that work.


Lightroom
I finally split my catalog.

I have over 80,000 images in my Lightroom catalog. Since the catalog is just a database, that shouldn't matter, and probably doesn't. But my dilemma is that the size of the photo archive itself is so big that I had to buy a new 4Tb external drive to contain it. Last year, I bought two 3Tb drives. They're full to overflowing.

So I decided to take a step back and split the catalog. One of the beauties of Lightroom is that if you keyword your images, you can search for and easily find virtually any image in an instant. For instance, there are 676 pictures of me in that 80,000 image database, but I've marked only 87 of them as not-so-objectionable (everyone knows there are NO good pictures of yourself!). I'm never going to want to see the other 589 pictures.

Here's what I decided: I want to be able to access all the images that I've marked as "keepers" over the years (there are about 11,000 of them) and I want to see all of this year's pictures (2016) as well (about 8000 so far). The combined count is a little over 16,000 images which takes up a little over 1Tb of disk space. They're sitting on a 3Tb drive now and I'll probably go out and buy an extra 2Tb drive to use as a duplicate. That should leave me enough room for a while. My 4Tb drive and another (very full) 3Tb drive will serve as an archive for the full 80,000 images.

It was no trivial task. I probably could have taken a small shortcut but what I did was


The final step will be to echo the external drive to a fresh one and copy a "keepers only" archive to go on another external drive that I store off-site. For now, I have all the images in 3 places. Now I need to update to the latest Lightroom CC version (I haven't yet) and I'm good to go.

But you didn't come here to read my rants and raves. You came to look at some pictures! Here are some new ones for your enjoyment.

I've been enjoying my painting classes with Harvey Walker. I seem to be learning but progress is slow. I've been trying some different things to develop my skills and I have to admit I enjoy charcoal sketching:


As long as I'm shooting focus-stacked flowers, here's an image of an orange lily right at my house:

We did do a dog workshop but I haven't processed the images yet! Next time, stay tuned.

Posted by Glenn Springer at 7:47 pm No comments: