I'm on a two-month journey in Newfoundland. My goal here is to post some highlights, both in words and pictures, and to try to include some tips if you're planning to make the trek to the Rock.

You can click on any picture in the blog to blow it up. Most of the pictures are available as large format prints at very reasonable cost. Contact me.

This is the last in the series of blog posts documenting my summer-long trip to Newfoundland. That doesn't mean you won't see any more Newfie pictures, indeed you will! But maybe not in a semi-chronologically organized fashion.

This post starts mid-August. Amin is back and we're based out of Torbay, north of St. Johns. From there we drove back to the West coast, visited Gros Morne, then spent a day around Stephenville and the Port au Port peninsula, then drove via Codroy to pick up the ferry in Channel-Port aux Basques. After getting on the ferry, I never even took the camera out. So the post ends when we left the Rock.

Here are some stats for the trip.

BTW for those who don't know, Amin is a friend from the Haliburton Highlands Camera Club. He drove out with me, spent a couple of weeks, flew home and then back for the last two weeks of the trip. He loved it and would do it again, but was admittedly disappointed in the number of icebergs, whales and close-up puffins he saw. And moose. See below!


It was a fantastic 2 months. I met some amazing people, saw some unparalleled scenery and wildlife, hiked much more than I thought I could, stayed in some great places, enjoyed a variety of weather ("you have to love the wind"!).

Am I coming back? You betcha, b'y.


If you are an outdoor type person, there's no excuse for not visiting the Rock. 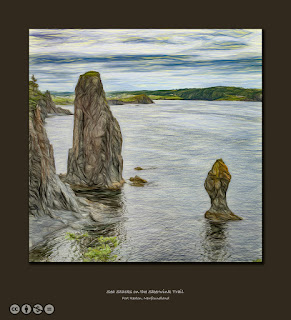 OK, now let's do some pictures to wrap up the trip.


By the way, there are some very beautiful estates and estate lots on the road to this point. Awesome view of the ocean or the bay or both. We saw a sign offering a one-acre lot for $595,000. The former premier of Newfoundland (Danny Williams) lives there, along with other big names.

North of Torbay is the northern part of the Avalon Peninsula. Since I like to drive my Subaru as far as I can until I run out of road (I call those rough dirt roads, "Suba-roads") we managed to get to the very end of the peninsula, at Cape St. Francis beyond Pouch Cove.

We spent the last couple of days on the West coast, in Gros Morne and Stephenville/Port au Port before heading to Port aux Basques and the ferry home. Here are some closing images...

I'll probably add another blog post in a while to summarize experiences, add some images and make some more recommendations for your upcoming trip to Newfoundland (you are coming, right?).

In the meantime, "Long may your big jib draw"!

Posted by Glenn Springer at 1:27 pm No comments: Links to this post