Blast from the Past

A blast from the past

There's a story behind this picture.
I came across it while cleaning up today.

I should have written this years ago when my memory was sharper. You have to understand, this was more than half a century ago! Gawd, I'm old! I think this group of students were from Dr. Lee's Theoretical Physics class. My main recollection of that class were (1) Dr. Lee had a very thick accent and half the time we couldn't understand what he was saying, (2) we didn't understand it anyway because the entire class was on General Relativity and the convoluted mathematics behind the Schrödinger Wave Equation, and (3) I have a mind picture of a blackboard covered from wall-to-wall and floor-to-ceiling with equations. I do have a flashback to the astounding moment when I actually succeeded in deriving ' E=MC² ' from basic principles.


What I can't remember is the name of the head of the physics department back then. I know that Dr. Stansbury had been promoted to Dean of Arts & Sciences and I can picture his replacement, a dour and forbidding older professor (he was probably in his 50's! LOL). I should, I worked for him as a research assistant on a project involving predicting lightning for a summer or two afterwards. Anyway his name escapes me but he was an intimidating guy who always seemed to be angry at us and had no patience for any 'tomfoolery'. We'll call him "Dr. X".


We spent our time in the MacDonald Physics building, a stone edifice built in 1893. The halls were 'hallowed', that's where Dr. Ernest Rutherford did his work on radioactivity, for which he won a Nobel Prize (in chemistry, though!). As an aside, the CCD sensors that Nikon used in their digital cameras (they now use CMOS sensors) were discovered by Willard Boyle, a McGill Physics alum, for which he shared a Nobel Prize in 2009). And you thought this was going to be boring!

So the dark hallowed mahogany halls of the building were decorated with ancient pictures of famous physicists and class pictures posed in front of the building. Many of them dated back more than a half a century — what is now over a full hundred years — gazed at with reverence by students and faculty alike.  Dr. X was very much steeped in tradition, I recall. We, on the other hand, were irreverent. Oh, we did our share of stupid nerdy things, à la Sheldon Cooper, but we were all serious students, every briefcase contained a Keuffel and Esser slide rule and a book of log tables, spiral-bound notebooks filled with mathematical derivations and mechanical pencils because they were easier to sharpen or at least use after a lead broke. Remember, these were the days before computers, or even pocket calculators!

Someone came up with the idea of shooting a picture of our class that echoed the ancient pictures in the hallways. Since I was into photography (and actually owned a Nikon and had a darkroom), I was designated to take the picture. So one day we all dressed up in period costume as best we could, and gathered on the worn stone steps of the MacDonald building (I remember the steps being worn smoothly concave by thousands of students' feet over the years).

I shot the picture, I put the camera on a timer and ran into the shot. If you don't recognize me, I was the handsome fellow on the right with the Beatles haircut. Don't ask me for other names, they're long gone.

When I printed the 8x10's I made them sepia, to match the aged images in the hall. I know I printed one for each of us, and I wonder if anyone still has one!

On a quiet afternoon, with nobody else around, I took down one of the mahogany-framed, glass-covered pictures on a wall, and slid our photo in front of the existing picture. Then it went back up on the wall.

Every time we walked by it, we used to touch it and laugh inside. It looked just like the old ones. Then one day, maybe as much as a year later, Dr. X came into one of our classes. And seriously laid into us for violating and destroying a venerated piece of history. I remember I came clean and invited him to open the frame, so he could see that the original picture was still there, untouched. He stormed out, outraged and steaming.

That was a cool moment. Almost as good as the day we sprinkled moist Nitrogen Tri-Iodide powder on the floor around the lectern. About halfway through the lecture it dried and every step the professor took resulted in a mini-explosion! Nerds!

February and early March are emotion-draining weeks up here in the Highlands. We had a wickedly cold January and everyone I know turned into a hermit, too cold to venture outdoors unless you had to. Sadly, after more than half of March is gone by, I've literally shot NO pictures. I just don't feel like getting out there. Later this week, I'm going to try to go up to Algonquin Park, especially if Dr. Ron comes for a visit and spurs me into it. I've been going from my bed to my computer chair to the couch and back again, with the occasional stop in the bathroom. Sad. My Garmin Vivofit says I've averaged less than 3000 steps a day, and I'm feeling it.

My house is for sale — as I said last year, I want to move back to the city when I CAN instead of when I HAVE TO. I love living here, don't get me wrong — but at this age and condition, it's that time. Here's the link to the listing if you, or someone you know, wants to live in God's country. http://www.trilliumteam.ca/viewlisting.php?id=1344553

No big surprise, if you go in grocery stores the variety of Keurig K-cup pods is overwhelming. Loblaws has cut back on the variety of Tassimo pods available, the writing is on the wall.

Too bad, because Tassimo had two things going for them: larger pods to brew a strong extra-large cup, and Latté/Capuccino varieties that included milk pods.

So I guess I'm buying a Keurig machine. I already have a small one for travel (but it isn't very good).


Update: I bought one. Costco had the best price on the Keurig Elite. I set it up and tested it, it's pretty good. There's so much choice of coffee varieties, it'll take a while to settle on the ones I like best! Too big for travel, though...

The birds aren't back yet. I'm seeing reports in other areas of the Province — further South — of meadowlarks, kildeer, bluebirds. Even a Phoebe. Nothing at Carden yet. Wylie Road is still closed  (I wouldn't dare, snowcovered and not plowed) beyond the Warbler woods. I did hear some meadowlarks but they didn't come out.

There were two pair of trumpeter swans on Canal Lake at Centennial Park Road, and I saw some European Starlings on MacNamee Road. 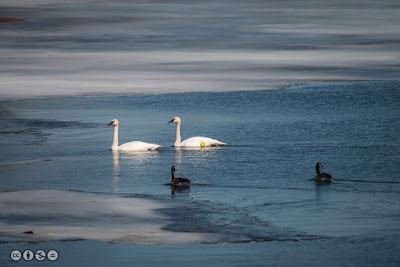 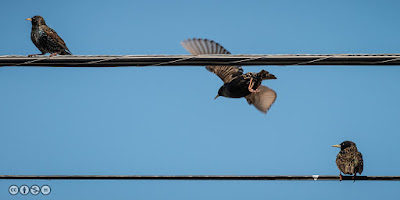 Give it a few more weeks.

I'm well on my way to planning my Newfoundland trip this summer. Yes, I'm going back again, I don't think I want to live there (you think winter was tough here?) but I absolutely love it there. I've booked all my accommodations, except for a few travel days and one four-day period at the end of July which is up in the air. I'm looking at leaving home around July 1st or so, coming home about August 20th.

The one new place for me is the Northern Peninsula, overlooking Iceberg Alley and near the Viking settlements at L'Anse aux Meadows. I'm bringing all the camera gear and the computer — whether I get a new camera for the trip depends on the sale of my house.

I've booked 2-bedroom or more accommodations throughout but I'm on my own except for a week or so around the end of July/beginning of August. I'd love some company and I know all the great spots to shoot, so if you've always wanted to go to the Rock, now's the time! Get in touch!

Here are a couple of pictures from last summer that I've been working on.

I reworked an older image that I had taken in Old Montreal. A Facebook colleague had put up some work that showed an effect I really liked. I couldn't duplicate it (nor would I want to) but it inspired me to make this picture: