Getting Ready for Fall Foliage 2010!

In about 10 days, we're having our Fall Foliage 2010 workshop! I'm having fun preparing for it, from logistics to curriculum. It's turned into a smaller group than I had hoped, but if the numbers hold, we can call ourselves "The Group of Seven". Catchy, no?

It's a well-known fact that the best way to learn something is to teach it to someone else. One of the exercises we're doing is "Follow the Rules". So I guess I have to know what the rules are! So when I went out to shoot a few pictures, I deliberately paid attention to them. Interesting results.

Oh, in case you think our workshop will be rigid and directed, another exercise is "Break the Rules". Should be fun. Check out the photography.to website.

Anyway, I went out and found some great venues, I got permission for us to shoot on several private properties, and to top it off, I found out there are a couple of events going on in Haliburton that weekend. The leaves should be peaking... even if you can only make it up for the day, come on up and get some killer shots! Email me if you're thinking of coming.

Stuck in a rut?

I am. I noticed that most of my images in the last weeks have one thing in common: they're extreme. Extreme colours, oversaturated, wild textures. HDR's. Topaz enhancements. Take this shot for example: 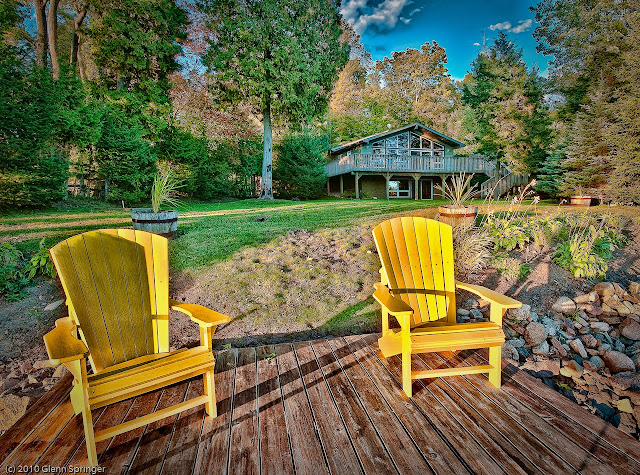 Sunset on Horseshoe Lake. This is a 5-shot HDR with some Topaz enhancement. I masked the sky and the left hand chair and used a different adjustment. I painted on the mask to bring out the texture and colour of the wooden dock.

I looked at a regular exposure of the same scene, but it looked boring to me. I'm really hooked on the detail and textures possible using these techniques.

So I tried a couple of other things I haven't done for a while. For example, an abstract:: 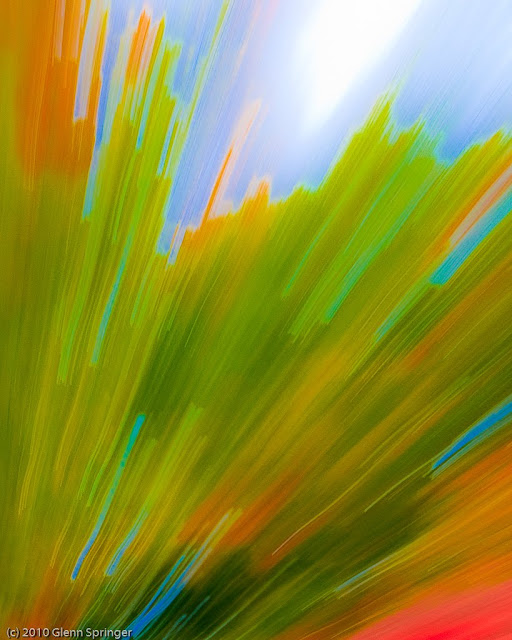 Tight detail from a slow shutter speed zoom of some mixed fall foliage.

I was shooting the chair picture above and had changed to the big 70-200 lens for some sunset shots. Then I looked at the house behind me and wanted to record an architectural shot. Wrong lens: I couldn't back up enough to get it all in and was too lazy to change lenses. I remembered reading that Adobe had improved their photo stitching algorithms in CS5, so I thought I'd give it a try.

CS5 is amazing! I took 6 images, 3 left-to-right of the top of the house, then 3 right-to-left of the bottom. I clicked "create Panorama in CS5" and voila! I can't pick out where the seams are, can you?

This is the original merge, but I added a red background layer so
you can see what I did.

And here's the final image after cropping and straightening. I dodged some bright spots and warmed it up a bit, but that's all. Needs a bit more 'air' above the house, though. The finished image is over 11,000 pixels wide!

My sister put me onto a device/service called MagicJack. I've tried Voice-over-IP system before — with an adapter between the modem and the DSL line or cable connection. The old system caused all kinds of problems, sound quality was lousy and it was unreliable.

Looks like things have come a long way. This unit plugs into a USB port, you plug a phone into it (or a headset into the computer) and it works! I've only had it a couple of days, but already saved money because I can now phone the US for free.

It's supposed to be only $39.95 (apparently less if you buy it at an "As Seen on TV" store) but in the end, it cost me about $60 because I had to pay duty when it came in and because they want $10 for a Canadian phone number. It works, though. Check it out — Google MagicJack.

Next time, I should be able to comment on Lightroom 3 which I've been trying to find the time to install, and maybe I'll show you some "back to basics" type images, no HDR, no fancy stuff. We'll see...
Posted by Glenn Springer at 12:30 am No comments:

News Flash! There's an event in Haliburton the weekend we're up there worth photographing!

Colourfest 2010 is happening in Haliburton Village on the Saturday. Here's what they have to say about it:

I plan to incorporate it into our program, for those who wish to go. We were intending to be in Haliburton Village (or Minden or Dorset) around mid-day anyway, so we can extend that a bit and delay the whitewater segment until later in the afternoon, or move it to the Sunday.

Several people have already signed up for this Workshop, but there's room for more! Hurry if you want to find accommodations, though. Go here --> http://www.photography.to/ to sign up.

More on the HDR issue raised the other day:

Photomatix Pro and Photoshop CS5 are really different in the way they handle HDR merges. Some pictures are easier to do in CS5 -- but I haven't yet identified which ones they are! Things like contrasty metallic objects, I think. But landscapes and subtle skies -- forget it (unless I just haven't found the formula yet).

The following 2 images were shot at dawn off a 10th floor balcony facing North. Neither one is worth writing home about. I did a 5-shot bracketed series, with the nominal value being an exposure for the sky (probably a mistake, since there likely wasn't enough range to expose the buildings correctly). Then I processed the images by merging them into HDR's using CS5 and again using Photomatix. I used the same original 5 exposures. 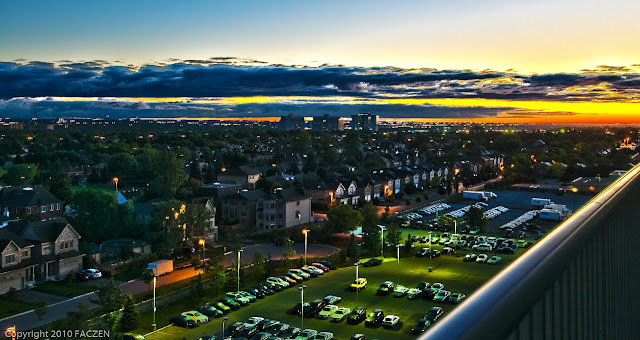 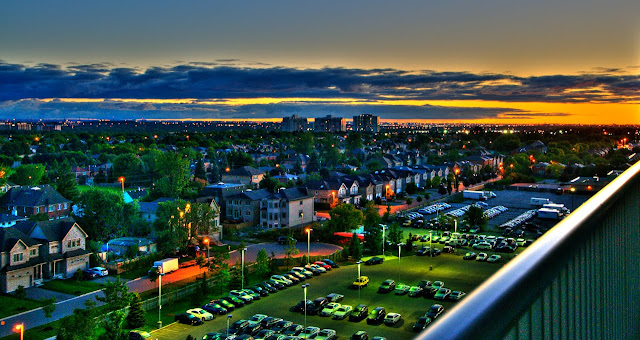 The CS5 one required a TON of fiddling and mussing around with curves, gamma, detail level, etc. Photomatix took 2 minutes. I was looking for some extreme effects: CS5 didn't give me any.

But as I said, I posted some vehicle pictures earlier that worked really well in CS5. The jury is still out.

Did you ever look up just after sunset at the deep blue indigo sky, with brilliant red saturated colours touching the earth and say, "I wish I could capture that"? But you can't. That's a sight you have to experience in person, something that film or a digital sensor can't reach.

You can't do it with HDR either, but you can try. When I look at this image I can almost imagine being there. A 5-shot bracketed set of exposures, rendered in HDR via Photomatix. I used a graduated screen to desaturate the building lights and marginally change their hue a bit. Post-crop vignetting adds to the rich feeling. I'm sure it's oversaturated, but it looks good on my laptop!

Posted by Glenn Springer at 5:43 pm No comments:

As I write this, I know there are at least 6 or 8 people coming up, and I know there'll be more. I'm billing it as a "workshop" but it's really an opportunity to shoot the awesome fall colours in the Ontario Highlands, in the company of, and under the guidance of, other photographers.

Here's one of the locations I found to shoot at sunset. By the way, if you're a fisher(man), the fish were jumping all around me while I shot this image! Smallmouth Bass, I think.

Hurry, hurry, hurry! Accommodations are going to be scarce if you wait too long!

Photomatix or CS5 to create HDR's?

They each have their strengths. Photomatix Pro gives you much more range of adjustment of effects and colours; CS5 handles image alignment much better. I'll experiment more later, but in the meantime... 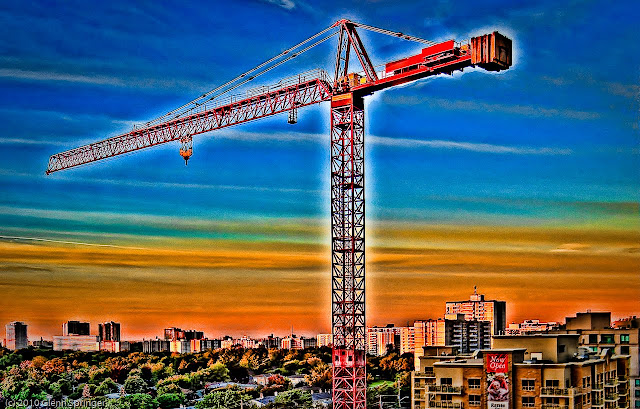 "By the Dawn's Early Light"
I took this image from the 10th floor of my mother's building, looking WESTWARD at the construction site next door at DAWN. Yes, you read that right: the sunrise was BEHIND me.  Photomatix did a great job enhancing the colours (and I added a little Topaz Adjust for the detail and other effects), but the alignment between the 5 handheld exposures was less than perfect.
I was actually intending a photo that shows the whole crane from top to bottom, but I like this crop much better because the full frame looks too cluttered to me.

Posted by Glenn Springer at 5:02 pm No comments: