All Right! Tons of visitors

I'm honoured (Canadian/British spelling!). 80 distinct visitors so far, and from all over the place. The Philippines, New Zealand, Belgium and of course all over the US and Canada. I attached a neat hit counter that lets me see all that stuff.

Remember, you can see most, if not all of my images by going to my photo gallery. Click here, or at right.

I know where a lot of you are from -- VROC. For those not in the know, that's the "Vulcan Riders and Owners Club", a group I've been a member of for several years and although we're all joined by the common link to the venerable Kawasaki Vulcan motorcycle, we're an eclectic group including some members with discriminating taste (demonstrated by the fact that they're reading this!).

So since there are motorcyclists here, it behooves me to give them something to look at. Here you go: 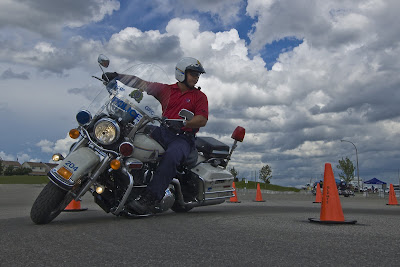 Now Luc is an RCMP Sergeant (maybe Staff... I'm not sure). I met him at the Police motorcycle competition mid-August at Humber College. He's a friend of a friend of mine, Lori (Twuble) who rides a little Ninja 500. I'll have to find a picture of Lori to post later. Anyway, the layout that Luc was riding -- successfully I might add -- was really really tight. I tried it later on a little Virago 250 and was generally able to do it, but not a chance on my ST-1100. Here's me on the ST-1100: 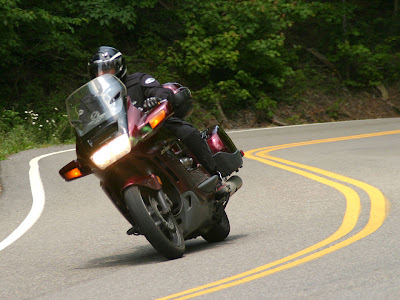 I'm not as skilled. I'm trying, but I can't do what these folks can do. Of course they can't take pictures... this photo was taken by "Killboy" at Deal's Gap in North Carolina. Quite the place: 318 turns in 11 miles. (I just read that the record amateur time on the Dragon was 11 minutes. I did it in 14. Not as bad as I thought!) here's a couple of links: a video of still images from Killboy and a link to the "Tail of the Dragon" website.

Here's me on a dirt bike last June: 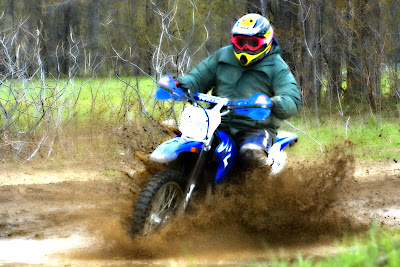 A little Orton effect for you photographers. I didn't take the photo (obviously) but I did do the PhotoShopping! I have to tell you, I was SORE after that day. I used muscles I didn't even know I had! But was it ever fun. Oh, and I did end up planting my face in that puddle!

And here's another friend, Shawna Aron, a couple of years ago on her R6. I took this at Shannonville racetrack right after I got my 70-200 lens. Shawna was the Canadian Women's Superbike Champion that year. 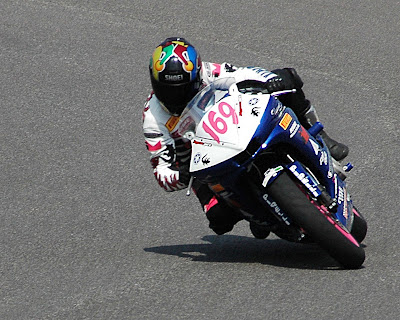 OK, so I promised you waterfalls. Be patient, they're coming! First I wanted to show motorcycles to my loyal followers!
Posted by Glenn Springer at 10:07 pm