We had a fabulous weekend up in Wawa. Due in no small way to Rob Stimpson and the crew at Rock Island Lodge who not only organized all the logistics, but who ordered up superb weather conditions for our visit as well. Rob is a laid-back mentor. He gently pushed me out of my rut and I'm sure, made me a better photographer. I will be back next year, unless my body (especially my knees) gives up on me. Go to Rob's site or the Rock Island Lodge website to see what it's about.

There were a dozen talented photographers on this weekend. I learned something from each and every one of them. I can't tell you how many times I said to myself, "I wish I could shoot pictures like him (or her)". I feel humble.

Now as I told Dr. Ron, if this had been a comnmercial shoot, I'd have considered it a failure. I'm used to having more images that I like come out of my 1500 shutter clicks. As it stands as I write this, there are less than half a dozen images that I would consider "print material", another 30 or so that I considered selected keepers, and a total of less than 100 images that I would use in a slide show or other presentation. Maybe enough for a Blurb book... 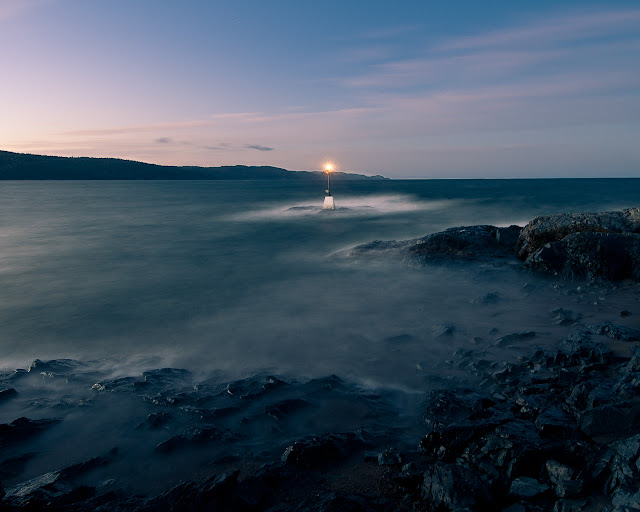 The Michipicoten River Light at dawn. I slowed the shutter down by shooting before it got too bright. I have about 3 or 4 other images of the same light but this is arguably the one I like best. It's a 30 second exposure at f/8 with the wide angle lens, ISO 200. This is cropped only slightly, just to straighten it up, and believe it or not, kiddies, NO PHOTOSHOP.

Speaking of Neutral Density Filters (we were, right?):
If you're going to shoot water, you need them. I had a 2x (one stop), a 4x (two stops) and an 8x (3 stops) and I stacked the latter two for several shots. It happens they're 72mm in diameter so I couldn't use them for this shot (my wide angle is a 77mm diameter). Adding a stack of neutral density filters on the front of the lens works but it's cumbersome and hard to focus through it. There are a couple of solutions.

Lee makes a filter holder you can mount on your lens. It comes with several diameters of mounting hardware and you slide in whatever filter you want. Dr. Ron had a Lee set with a graduated filter for skies and among others, a 500x filter that gave him 10 stops adustment. If your normal exposure would have been 1/4sec at f/8, you could open your shutter for 4 minutes for the same shot. However I found the Lee set clumsy, and watched Dr. Ron drop it on the rocks once... it's about $500 for the set..

There's another concept: made by SinghRay and also in that price range -- a screw-in filter that's variable! I think the way it works is that there are two polarizing filters and as you rotate them relative to one another, the ND attenuation changes: from 1 stop to 9 stops, continuously variable. I like that concept and I'll be keeping my eyes open for one of those. Downside is, it only works for whatever diameter you order (although you can probably use step-down rings for different lenses). Brian Barker, one of the other photographers on the weekend had one. 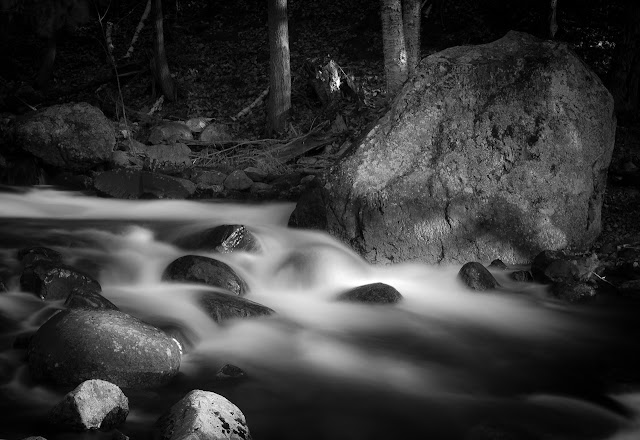 Harris Creek Waterfall. Here's an 8 second exposure taken in bright sunlight using the stacked ND filter method. Harris Creek is off Rte. 17 along the North Channel of Lake Huron. A local fellow I met there told me there used to be a grist mill about where the highway is now, used by the pioneers to grind their grain, and later a water powered logging mill driven by the same water. Amazing what you can learn by talking to people!

I'll share one more image with you from the trip (for now). Eventually, I'll get them up on my Smugmug Gallery, but you're going to have to wait for it! 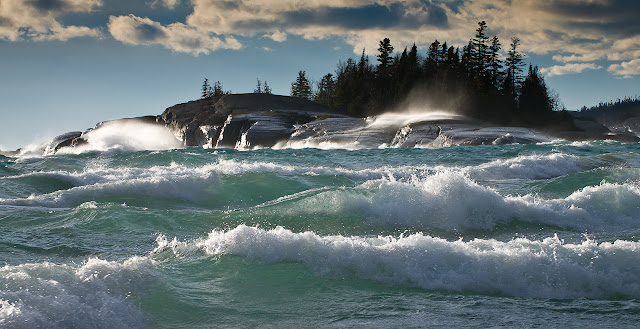 Indian Beach Surf. This shot was taken on Saturday afternoon after the wind picked up, as arranged by Rob with the Man Upstairs. The power of Lake Gitchigumi (Lake Superior. We listened to Gord Lightfoot all weekend. The Wreck of the Edmund Fitzgerald has the phrase "The Gales of November" in it. Did you know that?). No Photoshop. Some minor editing in Lightroom, that's all.

Visit my Smugmug site in a few days to see more images. I haven't even put the November Gallery up yet, so take your time!
Posted by Glenn Springer at 12:15 am