Do Inanimate objects have feelings?

That question is non-photo-related (NPR). It has to do with my car.

I've been thinking about changing cars. I drive a 2003 VW Passat with 210,000 km on it, and it's time. I need a bigger vehicle and AWD would be a good thing to have up here, so I've been hunting for a Subaru Forester and we found one: a 2007 in silver, the usual goodies (I'm not that fussy. If I get in, and turn the key, it should start. It should drive to where I want to go with the minimum of fuss and not burn a lot of dead dinosaur goo. It should have power locks and windows, and I don't care about much else. It shouldn't be black because then I'd have to wash it...).

Anyway, a couple of weeks ago, before heading up to Wawa for the Gales of November workshop, a 2000 km drive into potentially snow country, I brought it in to have the winter tires put on. I think the car knew that this was going to be our last long trip together, because Rusty came over to me in his waiting area and said, "did you know you don't have any front brakes?" $450 later, I did have. Could the car have been punishing me for thinking about breaking up with it?

Oh, a side note. They didn't install the brakes correctly. And this being the country, the mechanic drove me the 15 km home and picked me up when the car was ready, apologizing for the "crunchy" noises the brakes were making, saying it was because he used metallic pads, that's all they could get at the last minute. Crunchy and grabby was a real understatement. Still, as long as the car stopped when I pressed on the pedal... anyway, around 5pm, the night before I was leaving for Lake Gitchigumi, a car pulls into my driveway. It was the mechanic. He said, "I was thinking about your brakes and I think I didn't install them correctly". I said, "well, I don't have time to bring it in..." and he said, "don't worry, I brought my tools". He then worked on my car in my own garage and presto! No more crunchy! Can you imagine a city mechanic actually doing that for you? I love living in the country.

Back to the car. On Thursday this week, I drove to Toronto. When I stopped at the first traffic light I encountered (I live in the country, remember?), the car started running rough. In fact I had to work to keep it running. To make a long story short (too late!), I spend most of Friday, and $641, at the VW dealer. It was the thermostat and another acronymy thing, $80 worth of parts and $500 in labour.

Oh, on Friday morning, Philip, my leasing broker colleague told me he had found a Subaru for me. I swear the car knew it.

Not over yet. On Friday I discovered a crack in my windshield. This on a car that was due to be sold. So I had to have it fixed, I chose the 'repair' instead of 'replace' option. You can still see the crack, but it's small and no threat.

So I think inanimate objects have feelings and make them known to you.

The thought of changing to Mac from PC has entered my mind. Today, my laptop decided it didn't want to recognize the fact that it had a battery installed...

OK but I do have some stuff I want to sell.

I have a studio setup that I never use. Two 600w monolights, one 150w mono, Manfrotto stands, backdrops and backdrop supports, etc. Worth probably around $1500 on the used market. Contact me if you're interested but keep it quiet, I don't want the equipment to hear about it. I'll break it to them gently that I've found them a new and loving home...

More on the Moose Peterson book

I realize now that Moose was documenting his photography career and the work at the beginning of the book was when he was new and young. The book is fascinating. This is an incredibly dedicated and talented man and his work is outstanding. If you're at all interested in wildlife and/or bird photography, you must read this book. Click on the NAPP link at right (or this one here) to order it.

By the way, this guy HANDHOLDS a 600mm f/4 lens with a 1.7x teleconverter on it. And refuses to crank his ISO up above 100. I swear, that's a physical impossibility!

It always seems to be creeping up on 3am when I'm writing this stuff. So here are some images to enjoy (I hope you do!) and then I'm going to bed. 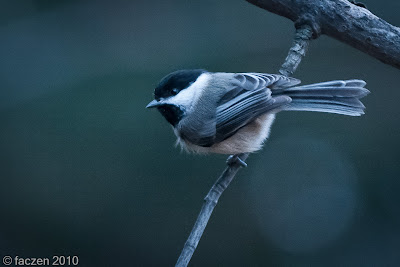 It's only a chickadee but I worked hard for this shot! Shot in the fading dusk light, the exposure was 1/13 second at f/2.8, ISO 2000. This is about half a frame on my D300. I used Topaz denoise -- works rather well, wouldn't you say? PS: clearly the camera was on a tripod but it took over 100 frames to get one where the little guy held still long enough! 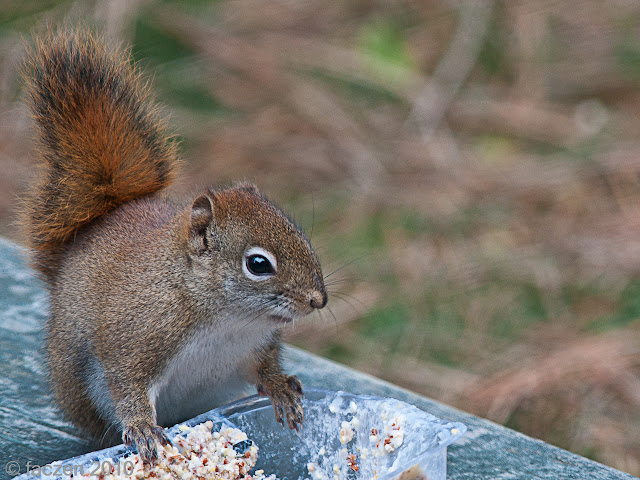 When I refilled the suet feeder, I put the remnants on the deck in the hopes of attracting something photographicable and got a visit from this little guy. The exposure is 1/40 second at f/8, ISO 400 and the lens is the 200mm and the 2x teleconverter, or 400mm. It took MANY shots to get one in tack sharp focus. Needless to say, the camera was on the tripod, autofocus and VR turned off, so I manually focused and used a cable release. These shots are not easy! 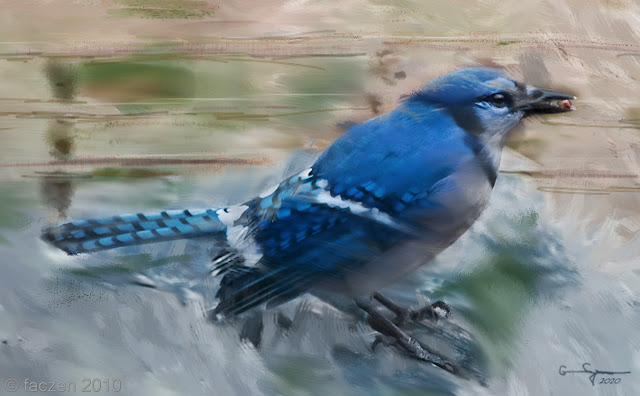 I haven't done any pixel painting in a couple of years, and I totally forget how. I did this in Painter 11, spending a lot of time trying to remember how it works (sometimes, I'm painting on a new layer and absolutely NOTHING is happening. I don't remember how!). Anyway, the only thing in this painting that was in the original photo is the bird itself. I created everything else from scratch — the fence, the seed in his mouth, everything. I think I should spend some more time doing paintings!

That's it for now! Drop by any time!

Posted by Glenn Springer at 2:48 am