Opportunity knocked but I didn't answer the door.

Yesterday, I drove into Minden. The sun momentarily broke out and lit the far slopes in bright contrast to the darker nearby roadside. "What great light", I thought, but I didn't stop. Then the sun lit the nearby trees, coated in freshly fallen snow, and I thought, "I really should shoot this" but I didn't. I had a shot in mind, of the Gull River just North of Minden where I figured the trees would be snow covered, the water mirror calm, and some detail in the sky. I skipped the opportunities I just described to you and pushed on, to get to where I wanted to shoot before losing the light. I got there: and nothing. The snow hadn't stuck to the trees I was picturing, the water wasn't calm, and the clouds had moved in making the light boringly flat. I struck out.

Two parables come to mind: remember the one with the billy goats where the next one would be the best one? And an expression I heard again a couple of weeks ago that sticks in my mind: "If you want to make God laugh, tell him your plans". SEIZE THE MOMENT. Shoot it NOW. Don't wait for a better shot later.

I make it a rule never to post to the blog without a picture or two. I found that hard to do this week because, frankly, I haven't gone out shooting, I've been running around dealing with business and personal matters. Still, I looked out the window at the first snow shower of the season and decided to brave the weather, find something extraordinary to shoot, and go out for a few shots. It's challenging to shoot during bad weather: I protected the camera from the falling snow with a 'storm jacket' that covers all but the front of the lens; only to discover that it didn't take more than a few seconds for the glass to become spattered with rain and snow. I went back inside and got an umbrella, then back out to shoot after cleaning the lens.

All to no avail. The idea was there but the execution was not. How do you shoot in a snowstorm? A short exposure gives you ugly grey splotches -- falling snowflakes frozen in time. A long exposure makes them disappear, but then the overall contrast and sharpness is reduced and the picture becomes mundane. I got wet, my camera got wet, I spent an hour out in the snowstorm and got nothing. Nada. I took one shot back and did some extraordinary photoshop work on it, then I hated it and won't show it to you.

Anyway, here are two pictures I took, both on Wednesday during the snow shower. Lazy shots. Done from inside my house shooting out the open door. 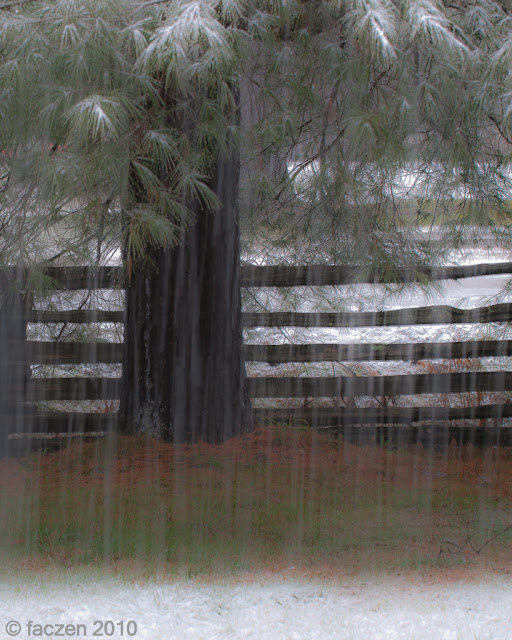 Both of these images speak to me. They reflect what it really looked and felt like during the snow shower. In both cases, slow shutter speed (1/3 sec and 1/5 sec) brought out some motion and texture in the falling snow. Longer exposures would have been muddy, shorter ones covered with ugly spots.

I might enter the second shot in a club competition, but just to prove a point. Remember the starry night shot of the Red Umbrella Inn a couple of weeks ago? I entered that one and accurately predicted my score. It scored 6-9-6 from the 3 judges. "Shadows were too dark", said one. "Some of the highlights were blown out", said another. A third one got what I was trying to capture -- the inn floating in a sea of stars on a crystal night, the detail in the trees and of the building. Blown out highlights. Building lights and a million stars. If I enter the above picture, I can just hear the comments: "the branches in the foreground are out of focus" and "highlights are blown out". Indeed. ON PURPOSE. It's a high key picture. Let's see if I'm right!

On to some technical tips.

Colour me impressed. Do you have any idea how much information is saved with your digital images by your camera? It reinforces the concept that this isn’t just a camera it’s a powerful computer.

I wanted to know how many shutter actuations I had on my D300. That information isn’t normally available, so I Googled it and found that there were several exif readers out there that can provide that data. I picked one and installed it.

For what it’s worth, I chose PhotoME exifreader, a free program that works on PC (not Mac. Google it, you’ll find similar programs for the Mac). Here’s the link: http://www.photome.de/.

How does it work? Download and install it (I didn’t choose the Beta version available, just the current version 0.79). Run it. Open an uploaded picture (they say it works better on a JPEG than on a RAW file, but I tried both and it works, but read the note below). An incredible amount of information is visible! I didn’t count them, but I’m going to guess that about 250 fields – 250 different bits of information – are available with each picture. Scroll down and read the wondrous info you now have on your images and on your camera.

Note: if the uploaded picture was imported into Lightroom and edited, then re-saved, you lose some of this info. So use an unedited image when you do this. There’s more information with the RAW file, but it’s all Greek! I didn’t analyse the differences.

So I found out that at the time I took that test image this morning, I had 35,468 shutter actuations on my D300. Here’s a quick upload of the results of reading two files, an NEF and a JPG: http://www.faczen.com/exifexample.htm

I haven’t talked about this in a long time. I won’t dwell on it: when Ron and I were heading up to Wawa last month, we saw some ugly spots on our images and sat in a restaurant at breakfast one morning and cleaned our sensors. In my case, I wasn’t too happy with the results, but accepted it. There were still spots which I had to clone out on critical images.

It’s a tedious and painstaking process but you have to do it. It’s also a good idea to do it at home, with no time pressure, so that you know how to do it when you’re in the field with a minimum of effort and maximum effect.

Buy a sensor cleaning kit. There are lots of them out there – I bought my kit from http://www.copperhillimages.com/ several years ago (by the way, the owner of Copper Hill is into macro photography, check out their website and click “about us” to see some great images of butterflies and the like). Anyway, you can buy kits in stores like Henry’s now if you want.

They also tell you not to blow canned air into your camera, although I’m not sure why, as long as you blow some into the open air first to get rid of the traces of Freon or whatever propellant they use. Certainly if you don’t understand why you shouldn’t blow with your mouth into the camera, you should carefully pack the camera and all related equipment up and return it to the store or put it up for sale because you’re too stupid to own camera equipment (LOL. That comes from an old computer help desk joke relating to a call they received about a computer not working. Seems the user couldn’t get it to work, and after some time the CSR found out that the reason was that there was a power failure at the user’s house…).

DISCLAIMER: The manufacturers all say “DON’T TOUCH YOUR SENSOR”, you can damage it irreparably, etc. So I’m posting this topic for information only. If you do something to your camera IT’S YOUR FAULT, NOT MY FAULT, I TOLD YOU NOT TO DO IT.

There are a couple of spots and a small streak in the lower left corner on my sensor which I can’t seem to budge. They’re minor, and I have to accept them, until such time as I can spare my camera for the time (and the charge, of course) for Nikon to clean it at the factory. I think they want about $100 and 2 weeks to do it.

It makes sense to keep your camera, lenses and other gear clean too. I’m somewhat guilty of not doing a lot to keep mine clean and I expect I’ll have to pay for that down the road. If my gear gets wet, I pat it dry and use Windex on the lens (well on the UV filter). So far I haven’t been in any particularly bad locations (desert, beach, African jungle…) so…

While I’m at it, I’d like to mention 2 other products.

I recently bought a Hoodman Loupe for viewing my LCD on the camera under magnification. It serves two purposes: one is, in those critical focus situations where looking through the viewfinder doesn’t do it for you, you can switch to LiveView (Canon has something similar, I think) and preview what the camera sees on the LCD. You can blow it up, look at it closer with the Loupe and do that fine tuning before actually firing the shutter. The second thing is, you can “chimp”. Look at a picture after you took it and blow it up to make sure you got it in focus, and go “ooh. Ooh. Ooh”, just like a chimp. That’s where the word came from! And show your shooting buddy what you got. There’s a third purpose: walking around with a loupe around your neck you look like a pro. Well really like a geek, but who’s judging?.

Seriously, the big advantage I find is that you can block the light from your LCD and still see it in a bright environment. By the way, don’t forget that your LCD, as big and bright as it is, does not have ANYWHERE NEAR the resolution or accuracy of your finished image.

The second thing I bought recently was a high speed card reader. My old one didn’t cut it. I bought mine (and the Hoodman) from B&H Photo (use the link at right to get me my Brownie Points!), for about $12. Worth it. My desktop has a built-in card reader but the laptop doesn’t, you either have to plug the camera or a card reader into a USB port. Today’s models are MUCH faster than the older USB 1.1 versions.

Time marches on. Things to do, people to see, places to go. Catch you later!
Posted by Glenn Springer at 10:33 am