I got lucky last night!

OK well not THAT kind of “lucky” but that’s not a subject for this blog. (My last post was titled, "The Earth Moved...". Anyone detect a common thread here?)

I set out to shoot a picture, researched it, planned it, set it up... and it didn’t work. But in the process I kind of got an image that I like! This is kind of a long tutorial on the thinking that went into the shot. It might give you some ideas about how to do similar shots and some pitfalls to avoid. But if you’re not a photographer, or you want to avoid having to read through a bunch of stuff before scrolling down to the image, here it is: enjoy. 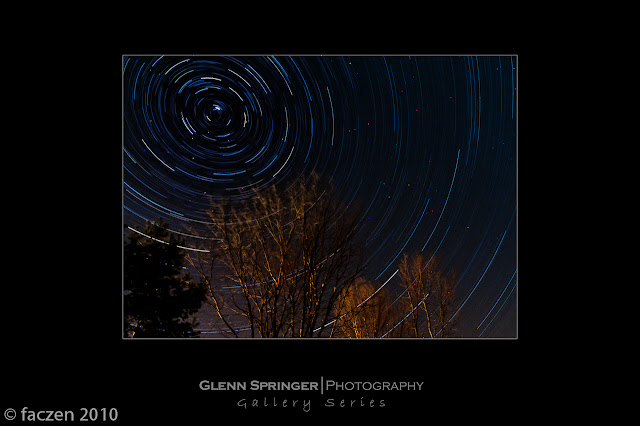 As usual you can click on the image to view it larger. You can also see it in my gallery at Smugmug where high resolution prints are available for sale at very reasonable cost.

Here’s the thing. I was in a ‘celestial’ mood after that eclipse event. I got home last night to a clear, starry night and thought, what’s the longest exposure I ever did? I checked and I think, around 80 minutes. Nice long star trails, but I saw an image a couple of days ago with much longer trails and I think the maker said it was a 4 hour exposure, so I set out to do one.


What settings? I looked at my earlier work and saw settings like ISO 100, f/8. So, I though, how can I go wrong by just stopping down a stop to f/11 and shooting for a longer time? I can always tweak it in Lightroom or Photoshop to adjust the exposure as long as I’m reasonably close.

What lens? Since I wanted to see a really big area of sky, the simple answer is, my wide angle. I decided to go whole hog, and cranked my 12-24mm to its widest setting.

Physical setup: Do I have to say, locked down solid on a tripod? I used my big Gitzo for greatest stability. Last time, my pictures came out on an angle because it’s hard to aim in the dark. So I set up the tripod in the house, levelled the camera and pointed the lens at the sky. Not straight up – I wanted some terrestrial objects in the picture.

That’s important, by the way. Star trails are neat but if you don’t have anything else in the picture, well, they’re boring.

I attached my cable release, put in a fresh battery, preset the exposure to “Manual – Bulb” and f/11, ISO 100, focused to infinity and turned off autofocus. If this lens had a VR setting I would have turned it off too. Then I bundled up in my sheepskin jacket and boots, threw a little flashlight in my pocket and trudged out to where I wanted to put the camera.

Next challenge. Where? I don’t have the ideal property for this. There’s only one place on my property where I get a reasonably clear view to the North and that’s behind the garage. Trouble is, you can also see the highway from there. I thought, I wonder what it’ll look like if cars drive by – will they pollute the light or create reflections on the lens? I thought I’d test this first, so I changed the camera settings to f/4, ISO 1000 temporarily, so I could take a couple of test shots without having to wait an hour to see them. I did a few 30-second shots. Having the flashlight with me was a good idea... well yes, there was a definite trail of light, way overexposed at the bottom of the image, no detectible splash on the rest of the picture, and I could crop that off. OK, reset to the long exposure settings. Besides, each car going by was only going to be in the frame for a few seconds and I was at f/11.

By the way, the Inn across the road keeps their big parking lot light on all night. I’ve talked to them about it, they agree it should be turned off, but haven’t done it yet. That’s why I had to go behind the garage. I could take my camera down to the dock but I don’t think I’d want to leave it there unattended for several hours, although I could put it where nobody would see it. Besides it’s a long walk in the cold.

So far, so good, right? Anyone catch on yet to what the problem was? Give yourself a brownie point if you did. Well here it is...

I set it up, locked the shutter open and went back inside to sit by the fire and enjoy my evening. It was 7:30 when I put it out, and I figured 11:30 when I would go out and retrieve it. Some time a couple of hours later, I thought, hmmm. The way Noise Reduction works on the Nikon is that it hums and whirs for the same length of time as the original shot, creating a null image (it doesn’t actually take a picture) and then it electronically merges the two images, subtracting any noise or artifacts generated internally in the camera from the picture. Ideally this should be done under the same conditions as the original picture, which means leaving the camera outside, chugging away for 4 hours. I could bring it to my back porch though. But then, it would be 3:30am before I could bring it in. I wimped out. At 10:30 I decided enough was enough, and I went out to get the camera. I got there, unlocked the shutter release and... NOTHING HAPPENED.

AHHHHH! Is my camera frozen? No... the battery was dead. It turned out that the battery lasted almost exactly 2 hours in -12°C temperatures. And that also meant, NO NOISE REDUCTION. It had shut down. {sigh}.
I brought everything inside (I took the CF card out and put the camera in an airtight drybag with outside air, to warm up in a dry environment. I’ve written about this before) and plugged the card into the computer. Hey.... not bad!

OK, I looked at the image and really wasn’t too excited about the distortion caused by pointing a wide angle lens at an angle. I tried perspective cropping to straighten things up, but nah... even the North star wasn’t a ‘point’. There were a bunch of little red and blue and white speckles all over the place – that’s the noise I couldn’t cancel. The trees were kind of neat, but the car trails and the barn at lower left which was distorted and overexposed were not, shall we say, pleasing. 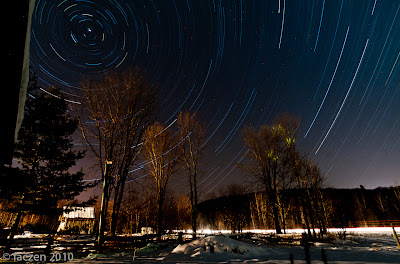 So I ended up cropping it. I did use Topaz, two different ways. I played with some extreme effects and ended up using a ‘simplify’ setting, then played with saturations and came up with this one: 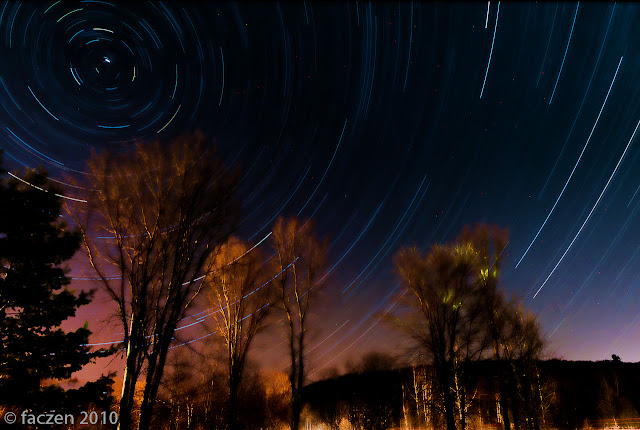 The final picture, which I showed you first, actually did contain a bit of ‘topaz’. I wanted to use the smoothing, simplify effect, but I wanted to bring out the star trails which got reduced by the filter effect. I liked what it did to the trees, though. So I added a layer mask and added a radial gradient on the layer mask centered on the North star which masked the entire Topaz-adjusted layer in that area. Back to Lightroom for a final crop, and we’re done.

So I got lucky. I thought of everything EXCEPT battery life. If I really want to do long time exposures, I have to find a way to power the camera externally, something I’m going to explore and report on when I figure it out. The other issue was the distortion which I think I can only fix by centering the image on the North Star or using a longer focal length lens. More stuff to think about!

Next: I have some saved-up topics but the moon and the star trails posts were too long to include them. I have some pictures of my new car, some frozen waterfall and mountain stream pictures and a neat HDR I’d like to show you. Later!
Posted by Glenn Springer at 1:32 pm