I wasn't going to do it!

I just wrote the following in response to one of our club members' question about why use LR when you already have Elements.


As far as editing is concerned, all three: Lightroom, Photoshop and Elements share the same processing engine, known as Adobe Camera Raw or ACR. But each program does other things outside that function.

■ Photoshop contains all the tools you'll ever need to manipulate a photo. You can edit right down to a single pixel with precision, if you can imagine it, you can do it in Photoshop. Twelve different ways, I might add. If you have the time and patience, that's the program to use. It has a steep learning curve, but you don't HAVE to use all the tools if you don't want to.

■ Elements contains a subset of the most commonly used, the more simple tools in Photoshop. And it's presented in such a way that you don't have to be as schooled to understand them. You can pretty well get to where you want to go but it might take some time to get there. Using Elements is sort of like using your camera on "Automatic", it's a 'Point-and-Shoot' editing program.

■ The downside of both of these programs is that they are designed to work on one picture at a time. Lightroom is designed to help you work with multiple images. Its forté is organizing your images and workflow by letting you import, file and flag and label a card full of images, edit them, let you switch out to PS to adjust them if you need more in depth manipulation, then you can export them for whatever purpose you have in mind, whether it's for print, for the web, for a slideshow, whatever.

The point of Lightroom is that it takes a fraction of the time to process images compared to the others. I can import 200 pictures, mark and select which ones to work on, do basic editing on those and get them ready for export in 30 minutes: which is about the same amount of time it takes to manipulate one single image in the other programs. It's a workflow machine.

What it DOESN'T do is work with layers or combine multiple images (except for the new HDR and Pano functions in LR 6/CC). Personally I spend 85% of my post-processing effort in LR and only go out to PS when I need to go above and beyond.

I told everyone I wasn't going to upgrade to LR CC (Lightroom 6) until I could see what kind of experience others were having with it. I gave in. I actually held out for... oh, I don't know, 8 hours? LOL. I downloaded and installed it on one machine that night.

First problem I had was getting it to run. To make a long story short, it wouldn't work – wouldn't even open – until I logged out of the Creative Cloud and logged back in. Then it worked seamlessly.


One weird thing: it decided that my F: drive – my external master image storage drive – should henceforth be known as the G: drive, which messed up a bunch of relationships! I simply renamed it and was back in business.

The first thing I did, after making sure everything was still there (and it was), was to do an HDR merge using the new function in Lightroom 6. Here's the first image I processed:

The resulting image in Lightroom is a natural, not heavily manipulated picture, that even people who say "I Hate HDR" can't find fault with. But the best part is, different from all the other HDR programs I have, the merged file is a RAW file (DNG) with a virtually infinite scope of what I can do with it afterwards. I understand the new Pano function is similar but I don't have any test images to try it on right now*.

The main advantage of the upgraded program is supposed to be an order-of-magnitude improvement in speed. Apparently they worked hard at optimizing how it processes images. Time will tell.

The other big thing they're touting for LR6/CC is Facial Recognition. Not something I care about since I'm primarily a landscape shooter, but you never know. The other thing is seamless integration with Lightroom Mobile that allows you to edit images on portable devices. But if I want to edit images I want to do it on my 26" monitor with my Wacom stylus in hand and an i7 quad-core processor slaving away in the background, so it's not for me. By the way, I have limited internet speed and bandwidth so I don't use any kind of cloud storage.

So far Lightroom 6 seems to be a seamless upgrade. We'll see...

It's brilliant. Almost seamless. Check this out:

I created the new header for the blog using the pano feature in Lightroom 6/CC. It's a bit taller than I usually use, wish I didn't have to cut the top off that tree! By the way, it's 20 merged images: I merged four 5-shot HDR's, then put them together as a pano. And there's a little touch of Topaz Impression, Rembrandt 1 preset in there.

I had high hopes for these images. But they didn't go where I wanted them. I'm posting this as a reminder that sometimes what you see in your mind is not what you can capture with the camera or even produce in post-processing.

I was practicing what I preach. As I drove past this hillside on a rainy Monday, the little water rill caught my eye. I was on my way back from my painting class, without my camera in the car (OK, that part I didn't do as I say...) so I marked the spot, drove home, picked up the camera and came back. Here's what I originally saw:

I liked the colour palette. Something I'm paying more and more attention to these days (I'm finally catching on, Rosa, if you're still reading my stuff!). The beech and oak leaves still hanging on the trees added a brilliance to the scene. And of course, the rushing water... you can probably see what made me stop. But when I got it home, I wasn't excited.

I did shoot a 5-shot bracket so the first thing I did was to merge them to HDR. Really a waste of time: this is NOT a high-dynamic-range scene, it was overcast and raining. And if you looked at the histogram, there was nothing blown out or filled in. But the HDR merge did increase the detail level some. Then I increased saturation and got this:


My next thought was, "too much going on". So I tried to lose some detail, using various tools like Topaz Simplify, negative clarity... nah. Another attempt, using Topaz Impression with an impasto preset (but multiplied in to enhance the tone of the shadows, not so much the texture): 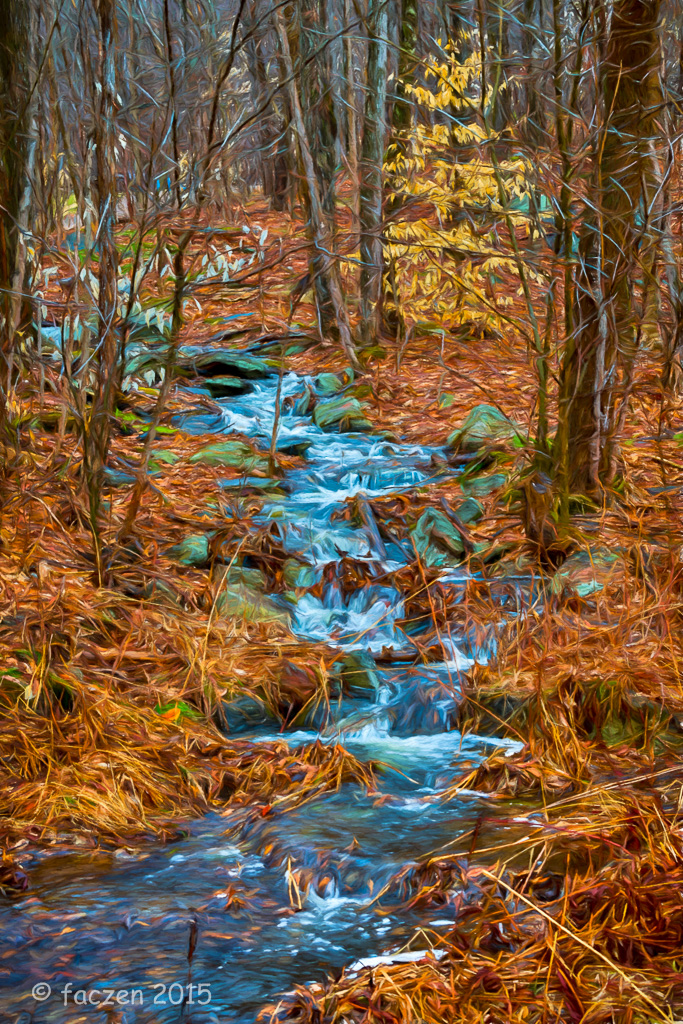 Now I ran "Simplify" on the image again, and masked out the river and the yellow tree, and here's the image closer to what I envisioned:


Not really what I was after, and not my favourite image ever, but it has its points!

I looked around before getting back in the car. "Working the Scene". I shot a closeup of some weeds, but didn't get much (I really have to get a macro lens!). Then about 100m to the right, I saw the scene below. Again, the colour palette was what attracted me and also, I had just spent a couple of hours learning how to paint rocks on canvas with oil paint, and I thought this scene had potential:

I took this picture yesterday, after coming out of the endodontist's office. I'd just had a root canal (doin' fine, thanks for asking!). I'm pretty sure this is his car... he did great work and deserves to be well paid! Well, maybe not THIS well...

Next week: images from the Carden Plain. The new header picture comes from there.

Posted by Glenn Springer at 8:23 pm