You know the old saw about making lemonade when you're dealt lemons? Another way of saying "the glass is half full, not half empty" or just "make the best of it". My D600 is on its way back to Nikon for service again.

The Nikon D600 has dust issues

For anyone who's in the industry, that's not news. I sent mine in to Nikon last February and thought they solved it; they actually changed the shutter mechanism which, I learned, was responsible for throwing oil on the lo-pass filter (that piece of glass in front of the sensor itself). It didn't work, Nikon:


You can't see this stuff when you shoot at f/8. Well, when you look really closely, you can, but it's not obtrusive. Almost all of my shooting is done at f/8 where I can, because that's the sweet spot on most of my lenses. But this time, I wanted the depth of field.

Here's another couple of images I shot at the same location and you'll understand why. These were in fact at f/8 but I had to fight to get focus on the barn. 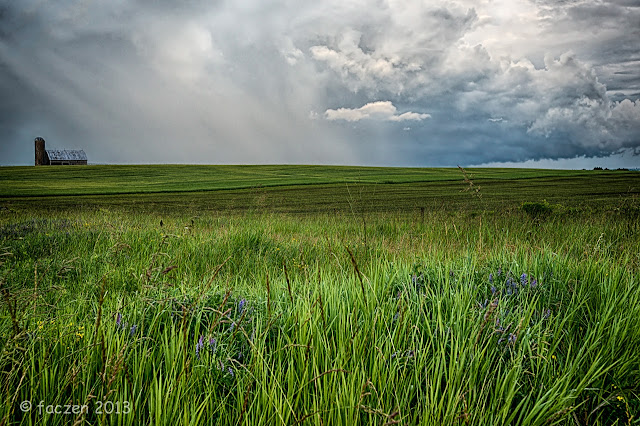 Anyway, back to the "lemonade" thing. I recognize that Nikon has had some issues with this camera but I trust that they will make it right. Canon people, stop rubbing your hands together in glee, I can hear you! So the good part is, I'll get my camera back (or a replacement) soon, and it'll be great. But I'm without a camera body and that's not acceptable, so I ordered a D5100 refurb from Nikon and as I write this, I'm waiting for the Purolator man to deliver it to me!

I had occasion to handle the D5100 that belonged to a student last week. It's a nice machine, and it has two features that the D600 doesn't have that I'm looking forward to: it has an articulated LCD that flips out from the side so making those ankle-height shots will be easier (my knees are bad); and it's got an APS-C cropped sensor so when I really need to reach out and touch a distant subject, my 400mm lens will look like a 600mm on a full-frame. Everyone tells me the image quality is great, and, well, the price was right. If push comes to shove, I could resell it for what I paid but I think I'll keep it as a backup. I've been needing one anyway, I'm sorry I sold the D300 (but not sorry I got the 17-35 in exchange, Pete!).

So the glass is half-full. I'm coming out ahead.

PS: according to what I've read and heard, Nikon has solved the issue. Apparently only a percentage of early production cameras had this problem, and they've fixed it at the factory on anything made after April.

I need some. Please go to www.photography.to and have a look at the workshops tab. My advertising hasn't kicked in yet and I need some work. I have some 3-hour and some 2-day sessions available, and a flexible calendar. Please pass this on to anyone you know who would benefit from a workshop. I'll come to you if it makes sense.

Last week I told you I'm a published columnist! I didn't believe it until I actually saw it in print:


They originally told me they would print the column every two weeks, but they've now changed it to every week! My faithful readers can preview the next column here!

Tuesday was a great photography day!

I had to be in Toronto on Tuesday, and headed for home late afternoon. When I was in Uxbridge for Ryan's graduation last week, I drove by a spot I marked in my mind to return to. That day was just a bright sunny one and the sky was featureless. I should have stopped but I didn't. So I had the opportunity on Tuesday and headed over that way.

When I arrived, it wasn't great, weather wise, but I stuck it out. There was a storm coming from behind me but the sky over the scene I wanted to shoot wasn't great. I spent half an hour shooting various shots, and then the skies opened up and the rain came down in buckets! I got in the car and headed for home. Not 10 minutes later, I drove out of the storm to see this:


Then I turned to my left and saw this scene:


Not yet done for the day. Now the sky was interesting, so I turned around and went back to the original spot, it was about 10 km back (the above picture was just South of Sunderland on Highway 12; the original scene was just before the turnoff to 12 on Highway 47 in Greenbank). So the top pictures in this blog were taken after I went back. Those were the remnants of the storm that had passed through.

STILL not done. I spent about an hour there, then headed home again. About 5km up the road from the rainbow spot, was this scene.

OK, back in the car. Another 90 minutes drive to get home. I needed a pit stop at the Tim Horton's in Beaverton and by now it was getting dark.

Earlier this week I was working on an older image that I took in Norland. I wanted to make it a dusk shot, so I created the lighting effects entirely in Photoshop. It wasn't really late in the day when I shot it:


Back to the drive home and the Tim Horton's:


So. One drive home, more than half-a-dozen distinct keepers, at least 4 for the gallery and large scale printing. All with a camera infected with dust-spot-measles. It was definitely a good day.