Yeah, I know you can finish that. Quite a week.

Since the show, I feel like I haven't stopped. Then I look around and it seems like I haven't accomplished anything, My house is still a mess, I have papers and pictures everywhere, I was trying to work on something and couldn't find an uncluttered horizontal surface to put things on... everywhere I look there's something else I need to do.

The house smells funny: like old cigarette smoke. So I thought it would be a good idea to go clean the creosote out of the fireplace chimney. When I ran the brush down the chimney, there's this odd 6-foot gap between the bottom of the steel pipe and the fireplace insert. I have a call in to a chimney repair guy. Stay tuned... it's a good time of year for that to happen, though. Think what it would have been like mid-winter!

Update: he was just here. There's nothing wrong other than my brush being worn to the point that it's looser than the chimney liner in spots. He figured that it was a combination of things, including the gasket which is worn down a little, and told me how to fix it. That's a relief! I can't fix stuff generally, because all I do is break things!

I broke my Wacom stylus. I went shopping for a new one: even on eBay they're $70 or more. I got lucky, though (and so did one of you!). I found an almost new Intuos4 Small for almost the same price, complete with stylus, mouse and all the goodies! Bought it, got it, I'm a happy camper. I also found a used stylus on Kijiji, bought it too.

So why is one of you going to benefit? I've been using a tablet and stylus since I took the Pixel Painting course several years ago. Once you use one, you'll never go back to a mouse! OK, that's not fair, the mouse is good for certain stuff, like writing and file management and web surfing... but for any kind of photo editing or management, the stylus is like heaven. Imagine trying to write with a brick instead of a pen: that's what the mouse is like in drawing tasks. And don't get me started on trackpads. 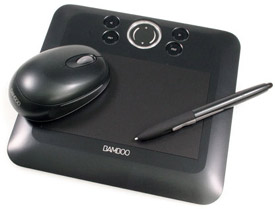 I now have two Intuos4 tablets, one small and one medium. The tablet I bought originally was a Wacom Bamboo Fun, size small. It is great for getting your feet wet. And I'm going to give it to someone. Free. It's used but it works perfectly on PC or Mac, driver is readily available at Wacom. You only need to do three things.


As soon as I get 50 new names, I'll pick someone at random.

A couple of years ago I posted a picture of a huge pile of carrots and wondered what caused it. The most popular conclusion was that aliens shaped like bunny rabbits had invaded the Earth unknown to mankind and had planted cachés of food while on their mission to enslave mankind and take over the planet. Search for "carrots" if you dare. 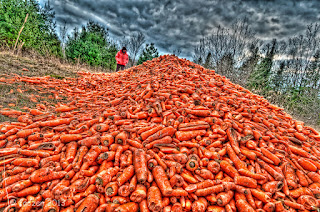 The plot thickens. Today I was out talking with the chimney repair guy and I turned around and saw this:


But then I looked a bit more closely, and was compelled to take a little video with my P&S to try to communicate what was going on (if you're not on high speed you may want to skip clicking on it):

The mushrooms are growing in a perfect circle, approximately 4 meters in diameter. There are no other mushrooms around. It's hard to capture unless you get up on a ladder with a wide angle lens (and I don't do ladders), so I opened a ground level shot in Photoshop and circled the mushrooms in the picture:


Now I think the alien bunny rabbits landed their spacecraft right here and left behind spores from their extraterrestrial home. There's no other logical explanation.

Disposing of an old computer

I had a Sony Vaio laptop years ago. It got really slow in it's old age (I can relate!), it's probably 120 years old in computer years and I replaced it with a Lenovo. The screen died on that one too, about a year ago and I replaced it with the HP Pavilion that I'm typing this on right now. But it was time for the Vaio to go to the great computer home in the sky. Or in the landfill...

I'd been using it to drive my scanner/fax/printer that's also toast, so it was plugged into the network and I also occasionally would back up files on it, like financial records, email addresses, etc. So it wouldn't be a good idea to just throw it, with the hard drive intact, into the garbage. I'm here to tell you it takes only one shot with an axe to eliminate that problem.


Anyway I wrote this to remind you not to throw out old computer stuff until you make sure your data is really and truly gone. Even CSI, the CIA, CSIS and other "C" groups wouldn't be able to put Humpty together again!

Time for some pictures

I know, you've been waiting and waiting, reading through my rambling drivel, waiting for some pictures. OK, here you are.

On Saturday, I unlimbered the ATV (must give her a name. "Polly", maybe, she's a Polaris... definitely female because you sit... let 's not go there). Anyway, I took Polly out for a ride not only down the trail but also along Horseshoe Lake Road to the White Water Preserve. It was a nice day and I figured I'd see some kayakers there. I've shot thousands of kayak pictures but it's somehow compelling.

I did, but I don't have anything special to show you. However I did take a few other shots in other locations.

I told you I went to the fast water. I had a picture in mind, and here it is:


I got some other pictures there but I'll save them for next time. I was following my own advice to "work the scene" and look around for other things to shoot. You'll have to come back to see them next week!