Trying a couple of new things

Last week I posted that it had been raining pretty steadily and it was tough to get out and shoot pictures. This week too: although there was at least one nice day, Life got in the way and I didn't shoot much. I did go out... but didn't bring much back.

It's taking some getting used to. The quality is so good that you think you can get away with snapshooting, but the laws of physics still apply and so do the rules of photography. Handheld 1/20 second exposures don't work, even with this marvellous beast.

What I like about the camera is exemplified by these two less-than-wonderful shots. Let me show them to you, then explain. 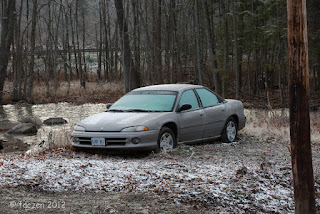 So what do I love? Look at the sharpness, the detail of these images. It takes me back to the days of shooting Hasselblads in the film days. I took the car shot because it's the first day of frost, the promise of winter to come. Boring snapshot. But when I blew it up and saw the incredible detail...

The ducks? I I startled them while walking along near my dock. Shouldn't have: I was wearing camouflage colours and walking quietly, but the ducks know it's hunting season. They were, I'd estimate, 200 m away and when they flushed, I brought up the camera and snapped a couple of frames, never expecting to see anything. Not even the 400mm lens, just the 200mm and on the full frame D600, that doesn't reach out and touch anywhere near as far as it did on the crop sensor in the D300. And yet look how crisp: you can even see individual feathers and water drops from their takeoff runs. Here:

Here's something else the D600 does

I'd have to check the D300 manual, but I don't know if it does Auto ISO. I started playing with that when I mounted the 400mm lens and was contemplating switching to shutter-speed priority because  I've yet to get a good shot with that lens under 1/500 sec. So I thought I'd try it: I set auto ISO with a minimum shutter speed of 1/500. Then I shot a 3-frame burst from my car window (open). Now admittedly, this wasn't at 400mm, but this is a new concept for me: bracketing shots using ISO instead of shutter speed.

On Monday, we had some very unusual weather. Rain and strong winds, but from the South. Usually the winds here are from the West, across the lake, or from the North. The unusual South wind broke a huge pine tree beside my house in half. The tree fell in my neighbour's yard, and luckily it missed his house by inches. 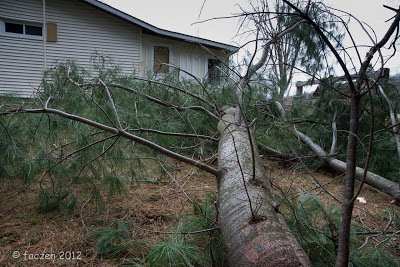 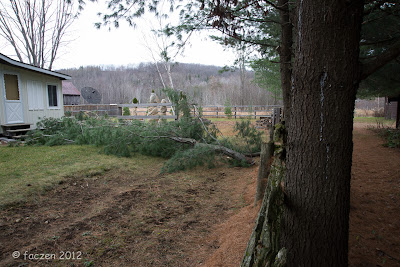 With the help of my neighbour Jim Walker who lives two doors away (and who's going in for surgery tomorrow – today actually since it's after midnight. Kidney cancer. They say they'll be able to get it all. I wish him well), and his chain saw, we cut the tree up into chunks and tossed it back over my fence.

Now my intention was to drag the tree pieces over to the brush pile behind my garage, when I got my ATV back from service. New stator. It came back this morning, so I did my first meaningful job with it.


While I was working on it, it occurred to me that I had read that the D600 did automatic in-camera timelapse. What happens is, you set it up and when it's done, it combines the individual shots into a video. I hope this works: I'm uploading the time lapse video here.

The full video was over 600Mb in size! So I imported it to MS Windows MovieMaker, laid a sound track over it and saved it as a smaller file. That gave me a .wmv file which I converted to an .mp4 at reduced quality, so this is only 19Mb in size. Hope it works!


For some reason the videos don't run in Google Chrome, at least not on my computers. They work fine in IE9 and with Safari on the iPad. I'm not sure why, perhaps one of my readers might enlighten me.

By the way, the music track is my own. The first one with a harmonica and a blues backing track, the second one just me on my Yamaha keyboard. I recorded both with my iPhone and uploaded them to the computer.

Lots of fun! Lots of new things to try!


That's all for now! Catch you next week.

Posted by Glenn Springer at 1:21 am