I want to start an online group for people who can't figure out how to connect to the Internet. I've also been meaning to write about procrastination, but somehow I never seem to be able to get around to it.

Sort of old jokes, but "many a truth is said in jest". It's the time of year when people think about their New Year's Resolutions which is another name for a list of to-do items that you'll write down again 12 months from now because you won't do them. But it gives you that warm and fuzzy feeling that at least you're thinking about them.

I've given up on some of them. Take weight loss, for instance. Today I spoke with a friend who said, "I'm going to lose 40 pounds in 2012". And I said, be careful because next December you'll look down and say, "I still have 35 pounds to go" and of course you won't make it. And he said, "funny, that's exactly what I said this December". I might lose weight this year. But only if I really want to because you can do anything if you really want to. I lost about 15 pounds this year, we'll see what happens in 2012.

But that's not why you're reading this blog. By the way, you're not alone: by the time you read this, the hit counter at the bottom of this page will say more than 10,000 hits! Not bad. No, you're reading this because you enjoy my photography, because it might give you some ideas and because you want to be able to say "I was reading his blog before he became famous!".

So from a photography perspective, here's what I have on my To-Do list. These are not New Year's Resolutions, I've been avoiding these items for a long time now, hopefully I'll get around to actually doing some of them.

So in the next 12 months I plan to run some photo workshops, get some of my pictures sold, take a trip somewhere really nice just for the purpose of taking pictures, and write a book. Some of these are in the planning stages, some are just resolutions and guess what? I'm on Chapter 3 of my basic photography book! I've blocked it out, written abstracts for all the chapters and now I'm writing. Damned if I'm not going to do it.

I've written this down and 10,000 people are going to read it. If I don't get to this stuff, then I'm going to look mighty silly, aren't I?

My intent here was to perhaps push some of you to get off your collective butts and do some of the things you've been meaning to do but never seem to get around to, before it's too late. Stop Procrastinating!


OK, off my high horse, and let's look at some pictures.

I shot these next two images a couple of weeks ago and mixed together some of the techniques I talked about in my blog(s) (tech blog included). They put some Christmas Lights up on the footbridge in Minden and I got a couple of different shots. Here: 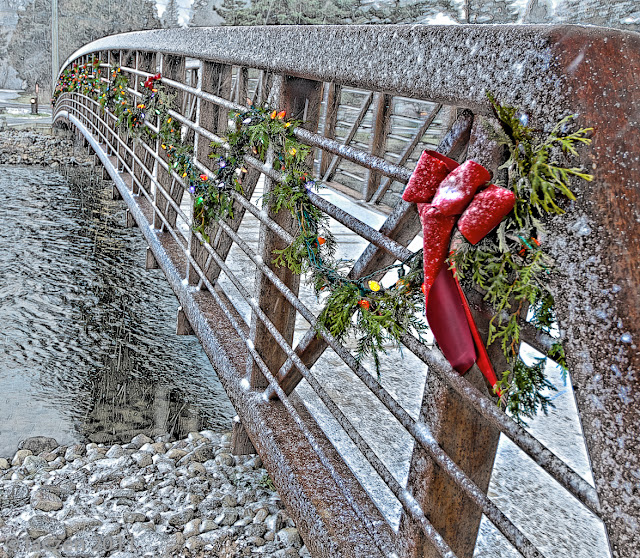 5-shot HDR with a little line-art technique mixed in. I painted the details of the bridge back in using layer masks in Photoshop.

I need to resort to some desktop magic to make the pictures as sharp as I want them. I'll get it, but I need some practice.  Here are a couple of shots from this week: 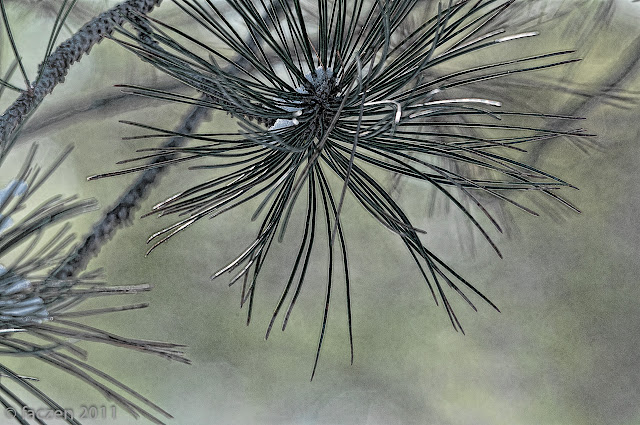 Once again, I used the line-drawing method of adding in sharp edges. And some Topaz Adjust 5. 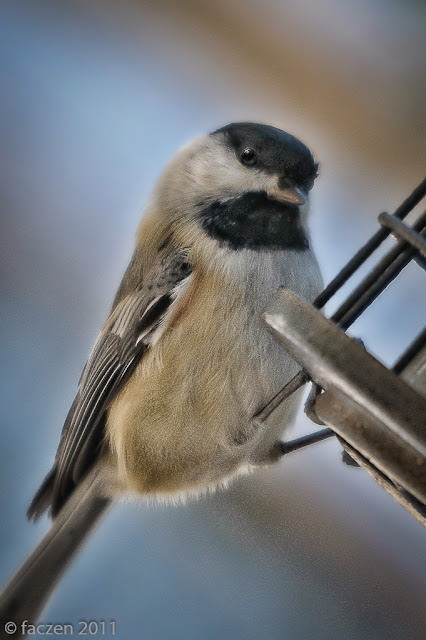 This Chickadee on my bird feeder was shot from on the tripod. 1/400 sec at f/5.6, ISO 1000 and it's cropped about 50% of the full frame and rotated. I admit to some enhancements in Nik Sharpener, Photoshop, and Topaz.

So finally, here's a Christmas Day shot of my neighbour's lights just before nightfall. If I were the "Christmas Card" type, and if this were my house, I know what I'd use the image for! But I'm not, and it's not... 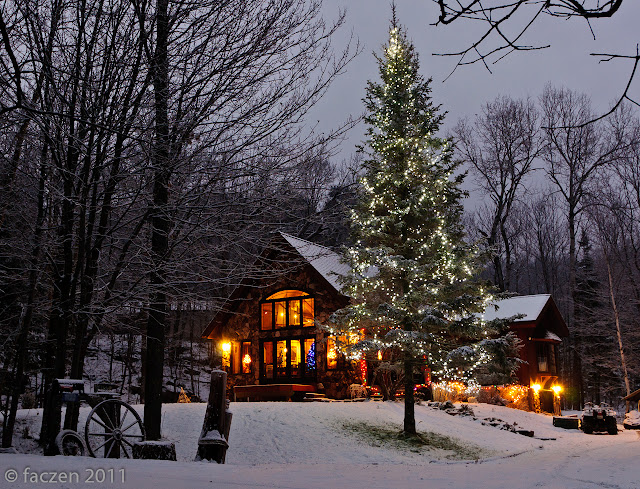 Interestingly, I shot a bunch of HDR prep shots, including a few 9-shot bursts but I like this single image best of all. I didn't do much to it, other than toning back everything but the lights. I'd like to make it look like it was snowing (it actually was, but not enough to show up in the image); I'll see if I can figure out how.