Now THIS is a new direction

But before I tell you about that, let me update a couple of things.

I finally spoke with a local who told me the true reason behind Xmaxxxx I mean behind the Carrot Pile. I knew it anyway, but I was just stringing you guys along (if you believe that...)

It's obviously for feeding deer. Apparently the Prentice boys and some other locals got a couple of dumpster truck loads of carrots and put them out in strategic places. I said deer don't eat carrots: how do they dig them up? The person I was talking to first laughed, then asked, "was there a shovel around"? Well, yes: some blue rain barrels on their sides under a sheltering tree with a shovel sticking out. During the winter, they come out and unearth (well, "unsnow") some of the carrots so the deer have something good to eat during the hard winter.

Eventually I'd like to get hold of them and find out whether they got any good pictures on their Carrot-Cam.

While I was up there, I shot a couple of self-portraits, laying the camera down on a rock or stump and setting the self-timer (once almost on a pile of raccoon poop which I didn't notice until the last second!). Anyway, by cropping me out of the background and overlaying the image back into the milkweed shot background, I came up with this greeting card concept and eventually the new Blog header. I'm reproducing it here because if you're reading this blog on an RSS feed, you might not be able to see the header. 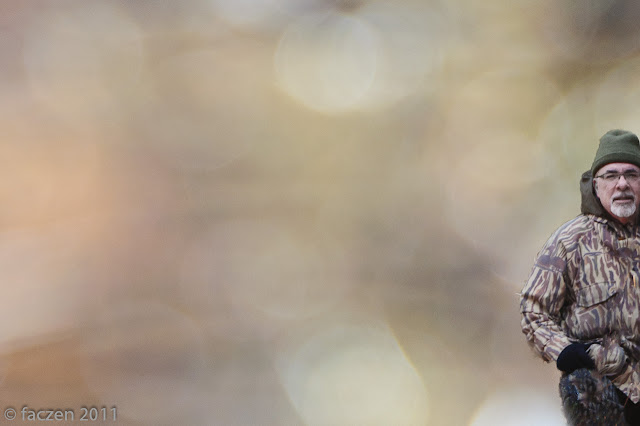 I've really been meaning to do this for a long time and finally got around to it. I'm about to show you an image I created... 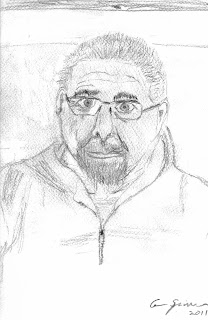 There was NO CAMERA involved in the making of this image.
And if you think it was entirely computer-generated, read on!

Yes, loyal fans, for the first time in my life (well since kindergarten 60 years ago), I picked up a charcoal pencil and some paper, and did a sketch. I actually drew something!

Well then I had to enhance it with the computer, doncha' know? So for my tekkie fans, I scanned the original sketch, and opened it in Photoshop. I scaled it vertically about 10% (the original face proportions were not exactly right), I drew enhancements to the eyes, and added some white in the beard then I used Topaz Adjust 5 to tone it and add some colour, and of course I cropped it.

Here's the image before colorizing it: 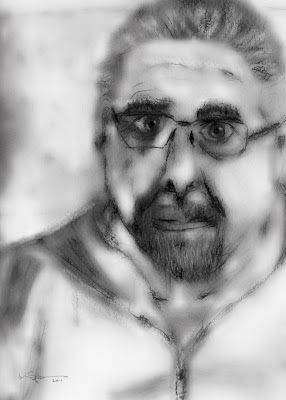 And here's a final cropped version that I actually like:

A Portrait of the Artist as an Old Man

Those of you who are actual real artists will laugh at these images. But it was my first attempt at actual drawing, and I'm pretty proud of it!

I had emailed the sketch to Rosa and had a funny telephone conversation with her that I want to share. First of all, she told me she likes the original charcoal sketch, (on the wrong kind of paper but what do I know?) and doesn't like the computer enhancements, but she's a real artist and doesn't get computer stuff (yet!), so I don't mind.

She told me that I was like a little kid. I get all excited about stuff I create and can't wait to share it. Photos, computer art, books, music... and now drawings and eventually paintings! I realized that she's absolutely right, and it's the reason that in some ways I'm 65 going on 100 and in other ways, I'm 7. I hope I can stay that way for many years to come!

By the way, if you think I'm going to be famous some day, this, my first pencil sketch, is available to an astute collector for a price. What am I offered?