Gather 'round, it's story time!

I have a couple of neat stories for you today. But first... 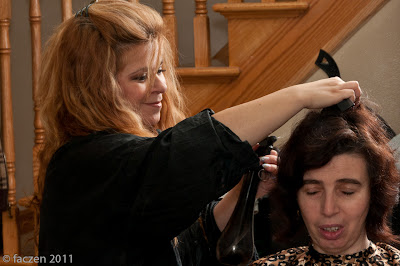 You can easily tell where the light is coming from: behind the subjects, off to the right. It's actually my SB-600 flash, mounted on my camera, with the Gary Fong diffuser attached. But how can that be?

I shot this image in an unusual way. In a mirror! I couldn't get a good vantage point in front of them so I shot from behind, but at their images in the mirror! I love the way the light falls on their hair, especially. Just another trick I'll file away for future use some time...

First Story: it's about the artist A.Y. Jackson
When we were up in Wawa, we learned that A.Y. Jackson used to own a house there. Right on Lake Superior, on a place called "Sandy Beach" by the locals. Here's the house: 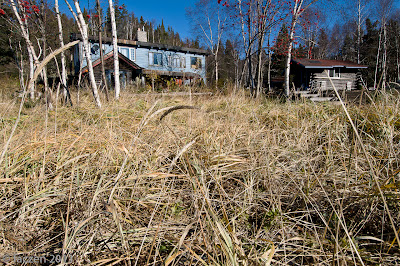 the blue part is a recent addition. The actual house stands in front and the outbuilding on the right
was there as well, as far as I know.


If you don't already know, Jackson (1882-1974) founded the Group of Seven Canadian artists in 1919 and is arguably the most famous Canadian artist ever. His passions were landscapes and he painted in the Georgian Bay, Algoma, Algonquin Park areas among others. An original A.Y. Jackson painting, if you could find one, would sell in the $1 million dollar range.

Somewhere along the way, he sold this house, but still frequented the area. He was an avid outdoorsman and ventured out frequently by canoe with his friend Tom Thompson and others. The story is that he was stranded by bad weather out on the lake and went back to the house for shelter, and the new owners obliged. According to the story, to thank them for their hospitality, Jackson painted a scene on a piece of birchbark, which they treasured for many years. Imagine, if you would, what such an original painting might be worth today.

Some years later, the teenaged son of the owner of the house came home from school and found it cold in the house. Apparently, the legend says, he used the piece of birchbark as kindling to start a fire in the fireplace. I don't care who you are, that has to make you cringe!

Other artists are enamoured with the area. Not 100m from this house, we met the renowned Canadian artist Valerie Palmer, at work on a current canvas. I didn't talk with her out of respect for an artist concentrating and hard at work, but here's a shot I took of her. 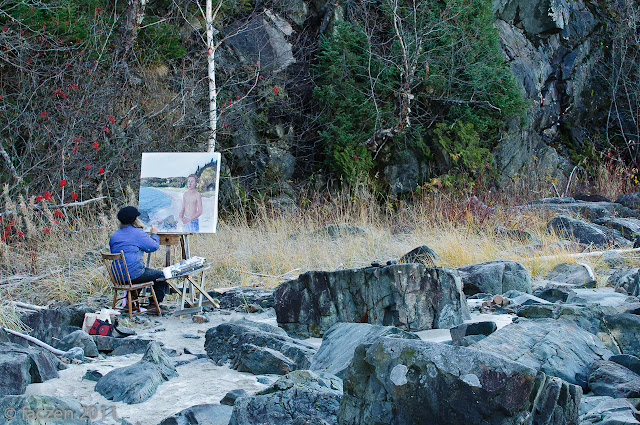 Second Story: Toronto's Best Art Supply Store
Three quarters of a century ago, Spadina Avenue was the centre of the "Shmatah" or lady's fashion business in Canada (some would argue that the real centre of the business was in Montreal, but I won't quibble). Every shop, every factory and building in the area was somehow related to that industry. Apparently, the Gwartzman family business was no exception, and they had a fabric store in the area. Mr. Gwartzman (I think his name is Paul) was working there and people — artists — used to come in to ask for canvas. Soon, apparently, an area was put aside for artist's canvas and over time, more art supplies were brought in. Some 70 years ago, Gwartzman's Canvas and Art Supplies was born, at 488 Spadina.

I read some reviews online — not all of them were glowing with praise. Mr. Gwartzman is apparently sometimes short with customers ("yes, that is a stupid question"!) and the quality of some of their products have occasionally been questioned, but there's no doubt that their prices are the absolute best anywhere and to my unpracticed eye, I can't imagine a wider variety of products.

Here's a picture inside the store last Saturday. Mr. Gwartzman himself was there, but not in the photo. 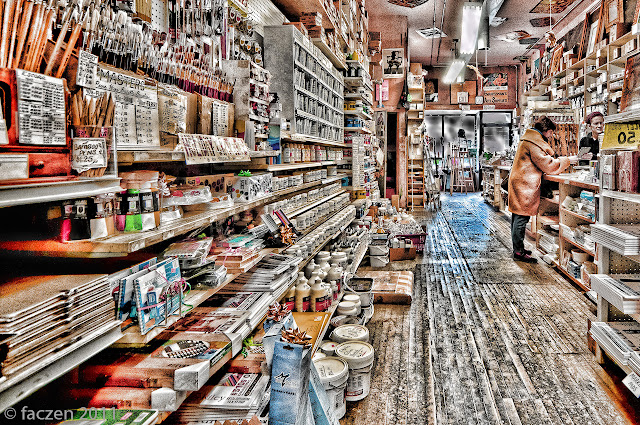 This image was toned with Topaz Adjust 5. I actually did 5 bracketed exposures intending to make an HDR, but the shutter speed was too slow and there was too much camera motion. Rosa is the customer at the counter.

I shot a quick high-key shot looking North along Spadina, on the streetcar tracks. After cropping and some artistic filtering in Photoshop, this was the result: 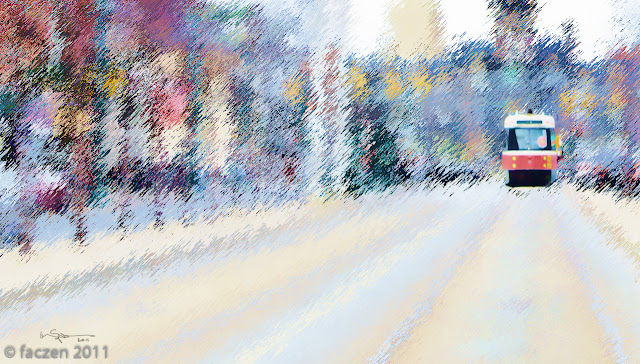 See you next time!