I was debating which of two photographic techniques I wanted to talk about today. I haven't been doing much photography over the past few weeks because I've been busy with work and other stuff, but there were a couple of learning experiences I wanted to share.

I decided that a discussion on spiffing up some forest shots in the boring and ugly early spring would be good to do first since it might inspire a few of you to go out and try it, instead of sitting at home bemoaning the fact that the world isn't pretty out there right now.

The other topic worth writing about is a foray into HDR, because the results can be fascinating and the technique is not entirely intuitive. I teased you a couple of weeks ago with an unfinished HDR image, I can document how I did it, but I'll save it for next time.

Before I get into it, I had occasion to shoot the Group photo for the Humber Motorcycle Instructor cadre a couple of weekends ago. I was looking forward to it because I have the new D300 and last year's shot, with the D70 was excellent. I looked forward to surpassing it. I was a little disappointed. Last year's was better. Somehow I managed the perfect exposure last year (I don't mean in terms of f/stop, etc -- I mean the ease of manipulation of the RAW file, the resulting super sharp image). Odd, because I used the same lens, the same camera location. It just showed me that you don't need 12 megapixels to do a sharp 18" wide print. Anyway, here's this year's shot: 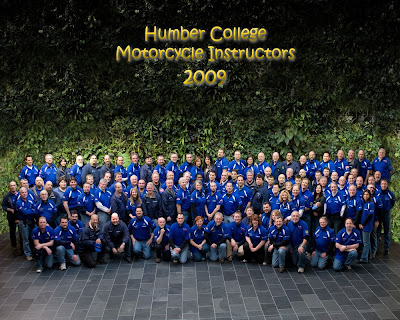 As in previous years, I learned that you have to take several exposures when you're doing a group shot. Invariably, someone will have their eyes closed or a funny expression on their face, so you have to have a backup photo that you can clone a face from, etc.

I put some effort into arranging the people this year, according to height. It worked, but I think I'll do something different next time because the group is too big, the photo too wide. I had to clone in all kinds of vegetation around the sides. I'm thinking about shooting from higher overhead, getting people into a more square grouping.

OK: let's get out in the forest!

Posted by Glenn Springer at 8:33 am