OK, I admit it. I'm tired of winter. I'm bored with pictures with snow in them. I'm not motivated to take more of them. Yes, I see scenes that I'd like to shoot, but I really don't feel like going out in the cold to capture them.

Mind you, I did drag myself out yesterday, and I'm glad I did. I had read that there was a "Dog Sled Derby" going on in Haliburton, so I thought I'd mosey on up there to see what there was to see. The weather was actually nice — around 0°C and sunny and there were some interesting images to be had. 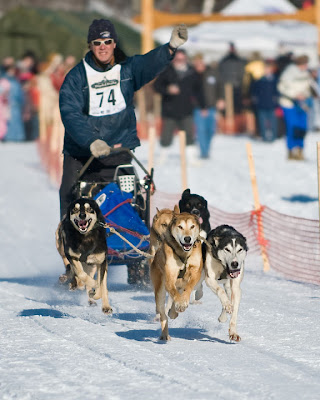 Races ranged from a 2-mile course for kids with up to 3 dogs in a team,
to an 8-mile race for grizzled veterans. 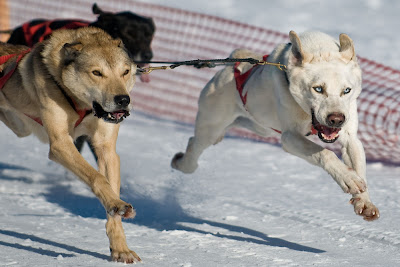 The dogs were smaller than you'd imagine from reading Jack London stories,
but they're powerful and wonderfully trained. 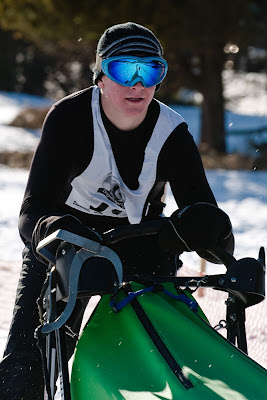 After an 8-mile race, this guy wasn't the least bit exhausted.
Of course he wasn't the one pulling the sled!
It was quite an eventful day, with crowds in the hundreds. That evening there was a blues concert featuring Jack de Keyser (which I missed, unfortunately). I overheard a discussion near me between one of the organizers and his friend, talking about the large number of well known musicians who had homes or cottages in the Highlands and who owuld be in attendance. Someone from the Guess Who was mentioned, but I didn't catch the name.

Photographically, I paid attention to what the pundits say: and I opened up one stop because the camera tries to expose for 18% grey instead of white snow, and will underexpose everything... NOT! Thankfully, I was able to compensate in-computer, because this D300 seems to KNOW what you want and exposes properly!

Anyway, there are more photos of the Sled Dog Derby in my Gallery here.

The Pixel Painting course is a month away! If you are attending, you should have your graphics tablet by now and need to be practicing with it until you're comfortable. In a week or so, you should go to the Corel site and get the 30-day trial version of Painter X and install it in your laptop.


If you're NOT attending the course (either because there was no space available or because you didn't know about it), go to http://www.photography.to/ to read about it and leave us your name so we can contact you when the next session is scheduled. It will be soon!

We're working on developing other courses and workshops as well. There's a "Basic Photoshop" course, and an Intermediate followup, and then we're working on an outdoor photography weekend getaway up here in the Highlands for late Spring/Summer. Watch this space!
Posted by Glenn Springer at 5:27 pm