"May you live in Interesting Times"

When I looked up this phrase to see to whom to attribute it, I discovered that it really is NOT an ancient Chinese curse and Confucius did NOT say it. However it is appropriate to the past couple of weeks for me.

This is actually a complete rewrite of what I penned yesterday. It all sounded like I was whining a lot but that's not my style. Let's just say it was an eventful time, and move on.

In the past couple of weeks, I've had some dental issues (by the way, if you EVER feel you need a new dentist, Ron is the best there is, anywhere. It's a bit of a drive to get to him, but worth it. Go to http://www.smilesdentalaurora.com/), there seems to be a nerve thing going on in my ear and I don't know, I'm just not feeling right. I think it's a 'time of year' thing. I've said before, I don't really like these "shoulder" seasons, waiting for winter to really set in.

Then I had some big car expenses, plus my ATV's just back from winter service and my desktop computer's exhibiting signs of being on its last legs. {sigh}.

That said, I was at THREE parties last weekend, had a great time with wonderful friends, I was interviewed by two newspapers (link to the Highlander article here).  and I'm working hard on the inaugural meeting of the Haliburton Highlands Camera Club next week (in 3 days, actually!).

So rather than bore you with lots of words, I thought I'd just show some pictures and restrict myself to a couple of lines of captions. 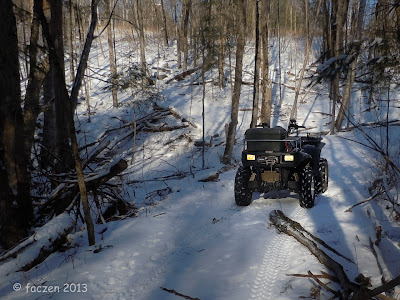