Shooting people on the street

I've had a lot of positive feedback on my Old Montreal shots, particularly the old guy walking. John called it "The Traveller" and I love that name. Thanks!

As a very shy person, I have a very hard time going up to someone and asking them if I can take their picture. I don't know how people do that, and I wish I could. Some people even go the extra step and say, "please sign this model release"! I can't even begin to think how to do that.

I get that the Traveller was in a public place and therefore I have the right to photograph him, and probably to use his picture for non-commercial purposes. And there's no question that I can say what I think about him as long as it isn't outright slander (a street performer in Ottawa has taken offence that while I thought he was an adequate saxophonist and I even thought he should be in a more prestigious place, like New Orleans; but I said he wasn't "outstanding". Every week or so he writes a rambling ranting, sometimes profane comment on my blog, so I've had to block him).

Paradoxically, the few times I have asked, the people have said "yes". I don't know why I don't do it more often. How do others deal with this?


As an aside, I once took some pictures of kids eating HUGE ice cream cones at Kawartha Dairy. A parent came up to me and told me to ask permission first. I get that (we live in a sad society where you would have to!). A lesson before you point the lens...


Got my Filter Adapter!

Very, very slick. This is a product I recommend. It works just as advertised: attach the adapter to your lens, screw each of your commonly used filters into a holder, then when you want to mount a filter, it simply magnetically clamps to the lens.

The magnet is pretty strong: I don't see the filter falling off, although I wouldn't rely on it riding a motorcycle at speed or banging through the brush on my ATV. To remove it, just lift it off at an angle (magnets work like that...). I tried both the 10x ND filter and the circular polarizer on my 17-35mm wide angle and they work perfectly. Note that Xume points out there might be vignetting on ultra wide angles, after all, you're adding an extra ring on the front of the lens, and they're right. Here's a test shot with the polarizer on board, at 17mm


I bought the starter kit for $53, for my 77mm diameter lens(es). It comes with one lens adapter and two filter holders. Down the road, I might buy another kit so I can use other filters and put an adapter on each lens (and my lens caps: you can't click a lens cap into the adapter, you have to use a filter holder. That said, I don't use caps when the camera's in the bag, I have a cleaning cloth up against the front of each lens).

Shipping to Canada was only $4, it arrived in about 3 days. There's a little video on their site, click the link!

I have my D600 back and yes, there are some dust spots again. Only 2 or 3 that I can see, a manageable number for now, and they only really show up at small apertures or when I do an HDR (the merge process seems to enhance them). Les Palenik has reported that he's seen some too.

But as Les points out, "...amazing IQ. Sometimes, I can crop a 24MP image into 4-6 different pictures. Or if I don't get it sharp in camera, then I downrezz it to 6-12MP which makes it sharp enough."

I think it comes down to that. The image quality is so high you see EVERYTHING. Anyway, I'm convinced the D600 is the right camera for me.

I should point out that Les is a prolific micro-stock shooter and the stock sites are very discriminating about image quality. In fact I didn't qualify when I tried a couple of years ago (I'm going to try again). So he knows what he's talking about.

Unfortunately, I can't afford the luxury of having two cameras at this time. I bought the D5100 factory refurbished from Nikon to use while my D600 was in the shop. It has a spiffy fold-out LCD that I'm going to miss, the reach of an APS-C sensor (16.2Mp), it's light, it's fast, it has some neat built-in effects. It handles high ISO situations really well, too. Check this out:

Here's the deal: $425 (OBO) gets you the body and all the stuff that came with it from Nikon, including warranty. The camera sells new for $565 tax in.  If you want, I have a small MF lens, and I'll discount a DSLR course if you want to learn how to use it. Contact me. Hurry, I think this is going to go fast.

My sister bought me a t-shirt a while ago, it says "Lazy but Talented". I wear it all the time and she knows me. There's a message here... wait for it!

My grandkids were up for a few days this week and Ryan, the 13-year old who is now taller than me, had my D5100 for a bit, while I shot with the D600. We stopped at the Stanhope Airport and there was a helicopter parked there. I took a few shots, but Ryan, who is NOT as lazy as I am, climbed up on top of a storage tank (wonder what's in it!) for a different perspective. On his own, I might add... no prompting from me.


His picture was better than any of mine. The message I alluded to is, "don't be lazy. Find that unusual perspective. Make the effort".


While we're on the subject of the D5100 (I'm starting to have second thoughts about selling it!)


This was really tough!

I've shot waterskiing/wakeboarding from Janie's boat before. It's a real challenge! You're bouncing around, it's hard to keep the camera steady, and tougher still to keep the subject in the frame, never mind in the middle where you can autofocus! In hindsight, I should have pre-focused at his distance (the rope isn't going to change length!) and I should have put the "Active" VR on, something I forgot completely about until this very moment. Next time.

Waterskiers have their eyes closed a lot. With water streaming in their faces at 30 or 40 kph, I'm not surprised! They also get weird expressions when they're exerting physical effort or focusing on what they're doing:


So here's the shot David's probably going to put on his FaceBook page... 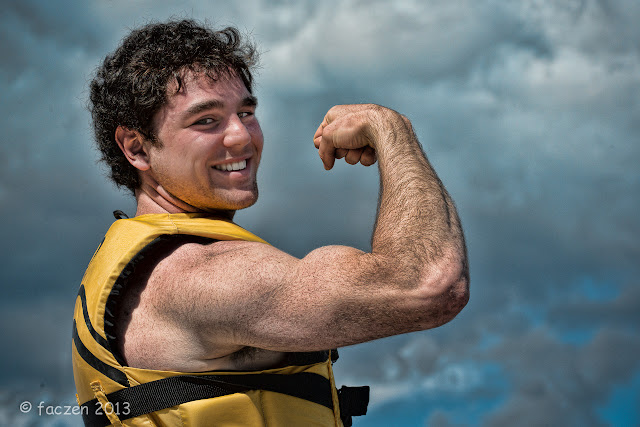 I'm going to hop on the ATV and head over to the white water to see what's going on. TTFN...