Sometimes you've got it...

And sometimes you don't!

Distracted by visitors (that's a good thing!) and with my mind clogged with other stuff (that's not), I haven't been shooting very many pictures for the past couple of weeks. Normally I see potential images everywhere around me, but not for a little while now. I'm feeling kind of jaded, but also on the cusp of something. I'm just not sure what.

I look at other people's pictures and say, "ho-hum. Another landscape, or HDR, or bird". Been there, done that. Stuff hasn't been speaking to me. I read a book on writing novels, then I read a novel and marvelled at how inept the writer was. Stilted dialog, inappropriate time spent on detail and not enough on character... and this is a published novel from a known writer! I watch sitcom's on TV and cringe at the laugh track, although I can still marvel at the skill of the videography. There's much to be learned.

I went out for an afternoon shoot with Dr. Ron and got... nuthin'. Not inspired. We spent 2 fruitless hours waiting for an Osprey in a nest to do something! It was a good day, though, the company was great, just getting a chance to unwind a bit... I feel a bit directionless and in need of a challenge. Is it just me, or do others feel that way sometimes?

Henry's Camera phoned me: the D800e I pre-ordered was in. "Come pick it up". I declined. Some financial issues, including the replacement of my computer, make it not possible now. My D300 keeps on trucking along, and I understand that Nikon is coming out with their new D600 in a few weeks at half the price of the D800. (Link) Maybe that's the ticket, we'll see soon! I have set aside enough money for that.

By the way, there's another rumour floating around for Canon fans: check it out! Thanks, Stu, for the heads-up.

Close to a deal

PS, I'm close to a deal to sell my motorcycle, or actually trade it for an ATV with a snowplow. Actually we've shaken hands on the deal but it depends on whether the other guy is able to restore the ATV to a suitable condition (I'm pretty sure he is, but I don't want to count my chickens!). Stay tuned...

I took this picture yesterday:

All around me there are signs of the end of summer and the promise of autumn colours to come. For over a week, there are trees and individual branches showing colour already. Likely they are the less healthy shrubs, suffering somehow from lack of circulation. Although the daytime temperatures vary with the weather, there's a certain crispness in the nighttime air even when it's a warm evening. I can't believe it's actually Labour Day Weekend, the traditional end of high summer.

Every year I look forward at this time and say "this year I'm not going to give in and shoot the trite postcard views of Fall Colours in the Highlands". And every year, my breath is taken away by the colours so bright that you need sunglasses to look at them without damaging your eyes. What will I do this year?

I haven't planned anything yet: but I'm thinking about a "Photowalk" or "Fall Colours Shoot" up here. Who wants to come up? Shall we put something formal together? Or just a group of friends? Please tell me your thoughts and if you'd like to participate. A quick flirt with my calendar says the weekend of September 29/30 might be the one. Drop me a line...

That's Rob Stimpson's workshop up in Wawa on the shores of Lake Gitchigumi (Lake Superior). I'm not able to go this year, but I think they still have some space available if anyone is interested. It's a long drive but a wonderful opportunity to get some outstanding pictures, make new friends and have a fantastic extended weekend. This year it's November 1-4. Here are some links for information:

This is probably my favourite image from my two visits there (published several times, including in PhotoNews!) 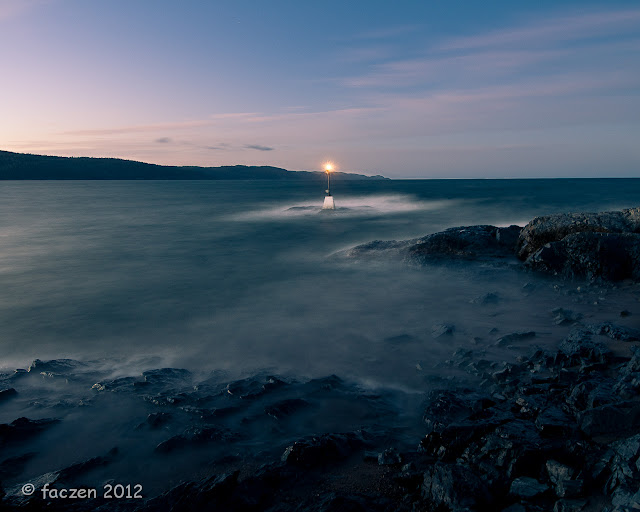 Anyway, here are a few images from this "less-than-productive-week". OK, some of them came out OK...

See you next time! Pass along this link: I'd love to have more visitors to my blog.

Posted by Glenn Springer at 1:45 pm