For once, I didn't shoot any HDR's this weekend. I love the technique, and it's hard not to like the dramatic colours and precise lines, but there's a lot of it out there. Whenever I browse the NAPP site, it looks like every second picture is an HDR. Overdone. But fun.

Anyway, I went to the Haliburton Sportsman's Show for two reasons: OK, three. One, it was something to do, a good destination for a ride on a beautiful weekend (the WeatherNetwork was wrong: no rain at all until the middle of the night last night!).


There's a site called intellicast.com that has interactive weather maps online! You can see precipitation, cloud cover, all kinds of stuff and you can see it tracking across a map, or satellite picture. It's really cool. Check out the link, click the purple "full screen" box upper right, then click "play" to watch the weather move across the screen. It's almost realtime: the weather pattern is only 5 minutes old! As you can see, the rain has already passed here. Very cool site.

Two, my old hunting buddy Pete was delivering a lecture on how to keep whitetail deer on your property (Pete is the author/owner of Ripple Outdoors. He's a noted writer and photographer, specializing in fishing and hunting). I had a coffee and a catch-up with him.

And three, I read that Yamaha was going to be there with demo rides (my friend André from Humber who manages the motorcycle program for Yamaha was there) and with the Yamaha Rider Academy which gets 6- to 10 year old kids scooting around on motorcycles. Clinton, the owner of Canadian Motorcycle Training Services wasn't there, but Bob Island was, an interesting guy who is also a photographer and is the editor of Snowmobile Magazine. I figured, a good photo-op and I wasn't disappointed. 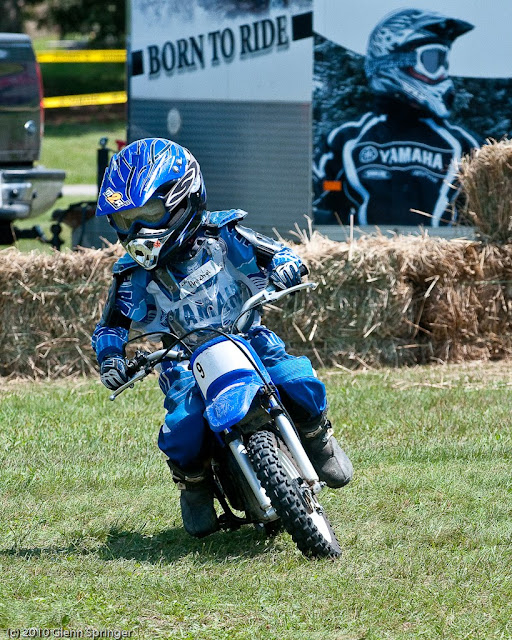 Reincarnation of Ricky Carmichael? Actually there was another kid there who also buzzed around fearlessly but was older. This little guy looks like about 6 years old! I might take some time to clean out the background on this shot. 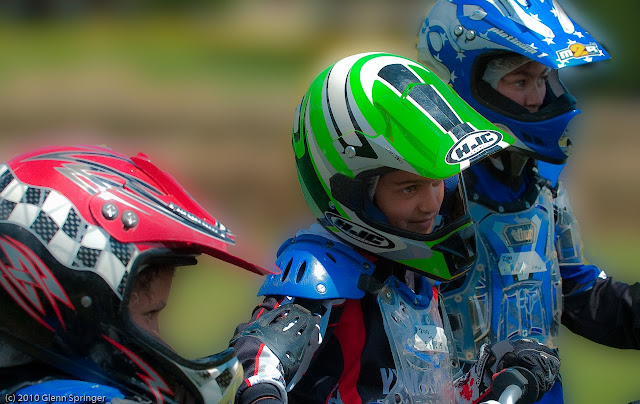 Then there were these 3 little girls — sisters, I'm pretty sure — who lined up for a picture from their dad. I thought the 3 colourful helmets made an interesting shot: I called it "R-G-B" (if you're not into digital, you may not know the significance of that. Google it). I cheated, though. It was "R-Y-B" when I shot it. A quick fix in Photoshop and voîlà!

This Yamaha WaveRunner was scooting around on the lake. I knew the 400mm lens was good for something! I was going to crop it tight but thought the image might be more interesting composed like this.

There are more pictures from this weekend on my Smugmug site.

My friend Pete writes and photographs for Ontario Out of Doors and other magazines. In the course of the conversation, he told me he could sell lots more pictures to them if he had taken the trouble to get MODEL RELEASES signed by recognizeable people in the pictures. He's right. And I've been lazy and don't have releases with me. You should always carry some in your camera bag. You never know when that super shot is going to come along!

I have one somewhere on the computer. I'll go find it, print up a handful of copies and stick them in my bag. If you want a copy, let me know (I think I said this before and never followed through: if I can't find the one I made a while ago, I'll make a new one. We need them)!

OK, I found it. If you want a copy of the modelrelease.docx file that I created and use, send me an email and I'll shoot it to you... Glenn