I feel sorry for people who grew up afraid of thunderstorms.We had a country place just North of Ste. Agathe, Quebec. I grew up in Montreal. We called them "country places". "Cottage" was reserved for a two-storey house in the city. Not like Torontonians who go away to the "cottage in Muskoka or the Kawarthas". There's an urban legend about a transplanted Montreal kid (I swear it was my daughter!) who said to her parents one day, "one day I'm going to see this fabulous resort called "The Cottage" that everyone goes to"!

Anyway, our house was up on the hill, across the road from the lake. My grandparents owned "the big house" which was on the water. It was a lonely spot, only 5 or 6 families on the whole big bay (Lake Manitou, we called it "Ivry" for some reason), and the property declined over the years until it was sold for a song many years ago. Of course it's now worth millions, and the whole lake is filled with "cottagers" and people who have retired. Torontonians: can you imagine — 500 or 600 feet of pristine shoreline on a clear, unpolluted lake only 45 minutes from the city?

Back to thunderstorms. My mom used to take us kids into the centre of the living room during a storm. She'd even take the bobby pins out of my sister's hair, I'm told, because she was afraid we'd get hit by lightning. Didn't rub off on us, though — a thunderstorm was a time we'd sit huddled in blankets and play games, having a great time!

A little older, I remember watching the storms through the picture window in the living room as they would track across the lake. The advantage of living up on the hill was, of course, the great view! I remember being in my grandparents' sun porch — it ran the full length of the lake side of the house and was screened in — you know what I remember most about being in there during a storm? That special smell of the rain through the screens. Every time I smell that smell, I go back to those idyllic childhood days.

I love thunderstorms. I was hit by lightning one time, while operating a Ham radio station on a "Field Day" at the top of Covey Hill sourh of Montreal. Blown through the wall of the tent. I have no lasting effects (right, don't say it!) and it didn't make me afraid. Later, I used to go to our garage in our "cottage" (two-storey house!) in Unionville and open the door and sit in a lawn chair protected from the rain except for the splashes that came in, and watch the storm.

Yesterday, we had a storm here. I grabbed an umbrella and went out to the gazebo in front of the house and just enjoyed the cataracts of  rain and the occasional thunderbolt. There was a smattering of small hail, and the sound of hail and rain on the canvas top of the gazebo was overwhelmingly beautiful. One lightning bolt hit somewhere out on the lake, couldn't have been more than 500m from where I was with an earsplitting blast of sound. Only one — too bad. I didn't have my camera with me because first of all, the gazebo is screened in and second I'm surrounded by trees so I couldn't get a great picture anyway. But I ran in the house as the storm slowly passed and took this photo out the doorway through the rain. 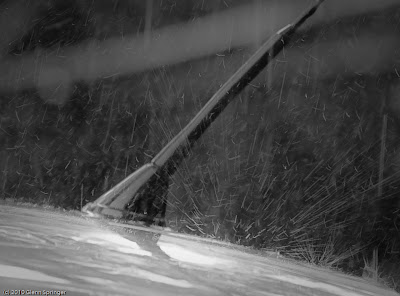 That's a closeup of the roof of my car.
I love thunderstorms.
Writing that took me back to great times growing up. I do have a photo somewhere of multiple lightning hits that I took out the window of our 15th floor apartment many years ago. It was a 35mm slide which I scanned, but I'll have to go find the DVD somewhere on which I stored it. I'll post it here when I do. If you have a picture like that, I'd be happy to share it, just send me an email and tell me where it is!

Last time I mentioned Intellicast. Here's an image I captured onscreen just after the storm passed. 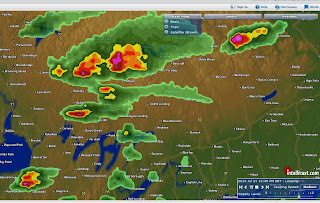 but I went back in time to just when the storm was overhead. I'm right where that big orange and purple splotch is. I changed to look at the cloud view instead of the precipitation, and saw this screen: 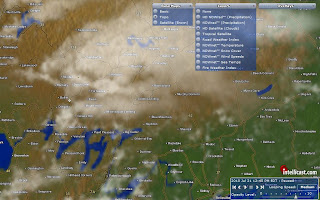 That "Revolver Map" spinning globe on the right

Looked very cool, but it doesn't do what I thought it did. I doesn't show you who HAS visited your site, it shows who's visiting the site RIGHT NOW. Yes, there's a counter at the top, but... so when I look at it, all I see is one visitor — me. And it has my location wrong, as "Markham, ON". Still, it's fun so I might leave it there for a while.

Enjoy your day!
Posted by Glenn Springer at 7:54 am