For the last two mornings, the thermometer outside my bedroom window has said -30°C. The sky is a crisp, hard blue and the stars were out overnight, like the proverbial diamonds in the sky. A perfect time to get some exquisite time exposure star shots.
Are you out of your mind? Did you not read where I said it’s -30°C? I’m sure the camera would do just fine, but these old bones are not going out there in the middle of the night in these temperatures. I did go out during the day yesterday, to chop some firewood and a short walk, and I did bring the camera, but I failed to capture the essence of the cold. I need a picture of someone bundled up, with their breath condensing in the air and icicles hanging from their nose or beard. However everyone I know is staying indoors where it’s warm. 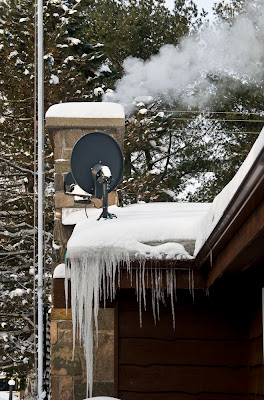 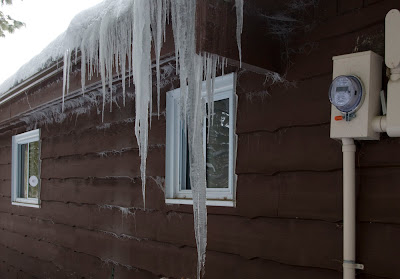 Does this say "cold" to you? I don't feel like I captured that, although the spiderwebby frost under the eaves is from the condensing vapours from the furnace exhaust. And the icicles say to me, "I hope this isn't going to cause an expensive roof problem!"

So I ventured out and asked someone to pose for me, when I stopped at the bank in Minden. I lied and said I was working for a newspaper... 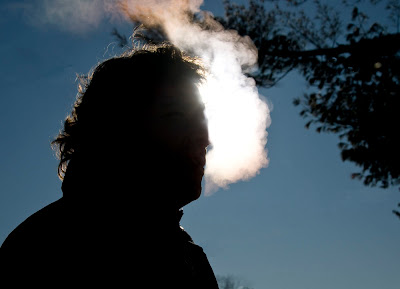 I actually went out knowing in advance what I wanted to shoot, and set it up. I'm not good asking people to pose for me. This guy wanted to know what Newspaper I was working for and I had to assure him he would not be recognizable in the picture.
Except the dog owners, of course. But then I would have to go out at the same time as them and get them to stand still long enough to get their pictures. Oh, and the ice fishermen. I don’t know what’s so attractive about snowmobiling in -30° temperatures, out to a freezing hut and dropping a fishing line into a hole in the ice, when you could just go to IGA and buy some fish if you really wanted some. Again, it’s hard to catch pictures of them from in here by the fire!
I haven’t posted anything here for a while. Mainly because I’ve been (a) working on some projects that has kept my attention and (b) I’ve been lazy, still in “holiday mode”. I haven’t taken a lot of photos in the last while, but as soon as it warms up, I’ll get out there. Actually, there are two people who want me to shoot business type portraits (both of them want them closecut so they can use them on various backgrounds. One wants an overhead shot, holding some test equipment, for use on a flyer). I’ll try to line those up for next week.

The only other thing I’ve done is to frame and put up some prints up at TrueNorth. As I mentioned earlier, I had printed 5 images on canvas, now, how to frame them? Since I didn’t know any better, I didn’t leave enough canvas to stretch them over a frame; so I took the easy way out. I went to Michael’s and bought 5 matching frames. Then I took them apart, threw out the glass and spray-glued the canvases to the back of the matte. That worked. Here’s a photo of the wall with the pictures on it. Hope the arrangement looks good: I don’t like doing things all lined up… 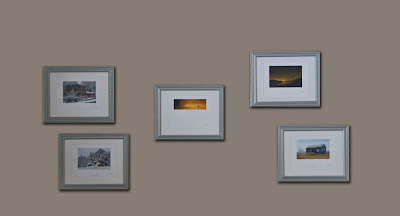 One of the projects I mentioned above is the Pixel Painting Workshop that I’m putting together with Hilarie McNeil-Smith. If you’re not in the loop, then you wouldn’t know that the course is over-subscribed by 100%! That means that we have 12 spaces and there are 24 people who want the course! I’m working on Hilarie to schedule a second session, but we’ll have to wait and see when that can be. Probably in the Fall. 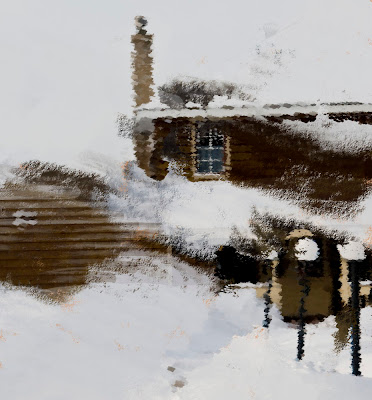 In anticipation of the course, I've been doing a little painting. I have no idea what I'm doing (which is obvious from the results above) but it's fun. I'm SO looking forward to learning how to do this!

OK, it figures. I go out for a walk ONCE without my camera. And two deer walk out of the woods 50m away from me, cross the road, and stop and wait in a little open area. I walked up within about 20m and stood and watched them as they watched me, for at least 15 minutes. AND I DIDN'T HAVE MY CAMERA.

One was a yearling and the other was either a large doe or a buck who had shed his antlers (they do that this time of year). We just stood there and watched one another. I was thinking, OK, that would make a good photo. And that, and that, and... grrr.

I had gone out to bring in some firewood, and knock the icicles down, then I thought I'd watch the sunset over the lake for a couple of minutes and see if anyone was at the ice fishing huts. I thought of bringing it, but I had my arms full with firewood. Oh well, next time. I found where they like to cross and I'll hang out there late in the afternoons.

What else is new? Well, I’ve offered to adopt a dog. Ginger is a 7 year old Golden Retriever and she’s currently in foster care under the auspices of Golden Retriever Rescue. I met her, and I’ve offered to adopt her, but I’m waiting to be contacted for my home inspection (they’re serious about the environment the adopted dogs go into). Should happen in the next couple of weeks.

I’m posting a “silly” picture here. This is the best I can do BEFORE taking Hilarie’s course. She gave me a little guidance (OK, a lot…) but then she sent me a picture showing me “…and this is how you SHOULD do it…”. I’m not posting her picture. Suffice it to say it’s a lot better than mine! She’s an artist. In my dreams, I’d like to be one… 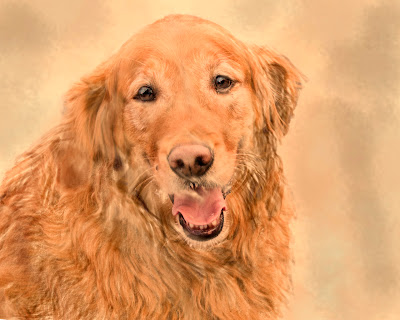 This is Ginger. I'll know in a week or so if she's going to be my dog.

No tip today, except drag out any book you have on Photoshop (including Photoshop User magazine, which you ALL should be getting. Go here to join NAPP, it’s worth it!) and try some stuff. Get really comfortable with layers and adjustment layers and masks. They’re probably the most powerful tools in the program. Oh, and STAY WARM!