2016 was like a painting washed with vivid shades of dark grey.

I sit here at the keyboard less than a month since my mother died. This certainly painted a gloomy shadow over the calendar year. I know there were some bright spots but it's hard to see them right now.

I want to share this poem which my sister found among my mom's things. I don't know where she got it or why she kept it but I found it so very appropriate. 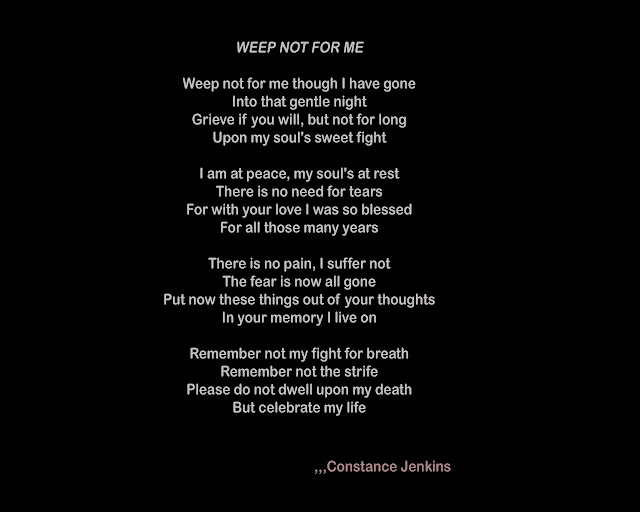 There's a .pdf copy of it on my website at http://photography.to/weepnot.pdf if you want to share it as well.

I took my camera out of my safe yesterday. It's been stored in there for a couple of months now. I haven't yet opened the bags but today I'll put the batteries in the charger and maybe shoot a picture or two in the next couple of days. So to my readers who look forward to seeing photos on this blog, I'm sorry to disappoint today but I will resume next time.

musings... an attempt to be thought-provoking

I came across the first line somewhere. If you Google it, there's no definitive attribution — several people have said it, you choose. But I added the second line myself.


I'm struck by the thought that I've often said if I were to have a second chance to start again, I'd come back as a musician. I can't imagine that anyone has not experienced that rush of emotion, that joy, that hasn't 'Kvelled' when hearing some music that struck directly at their heart. Tell me you never have...

I sat down at the keyboard today for the first time in what seems like a year. I don't play very well but I improvised a blues version of Ray Charles' "Georgia" and became lost in the song for close to an hour.

And yet that's never happened to me when seeing a photograph or a painting or a piece of art. Maybe that's just me. Maybe I haven't been exposed to enough masterpieces or maestros of the visual arts. Maybe I'm still mired in the technical side. Can I ever get there? I don't know.

My goal for 2017 and onward will be to convey feelings in my photographs, hopefully in my paintings as well. That doesn't mean I'm going to stop shooting pretty landscapes, challenging people and birds and animals or interesting scenes and activities. But I want to express myself sometimes in my art. Let me try to put that in other words.

Level 1: creating memories. A photo is a "snapshot" if the intent is bringing back a memory in the mind of the maker or participants. If you take a picture of the Eiffel Tower, when  you look at it some years later, you remember being there, that trip, whom you were with, sitting at that café having a coffee and a croissant... another great example is a picture of your kids. You are creating memories.

Level 2: telling a story. An image that attempts to make a third party – someone who doesn't know the maker or the subject of the photo – wish they had been there to experience the moment.

Level 3: the mind's eye is when the maker can look at the image and say, "that's what I saw in my mind". It's an attempt to render not what the lens saw or what the eye saw, but rather what the artist visualized.


The final step, Level 4: from the heart, is when the photographer or artist renders his feelings. The heart doesn't see angles and leading lines and colour palettes, the heart sees feelings.

Most of the images I care about are level 3. Most of my pictures are level 2. I don't know if I've succeeded in producing a level 4 photo deliberately, I'll have to think more about that. I believe my painting efforts are attempts at conveying emotion but I'm hampered by my lack of technique and skill. But as I read and write this, I realize that's where I want to go.

Here's something important: it could be that others will not appreciate these images. It doesn't matter, I'm doing it for me. You do it for yourself.

PS: Topaz Labs is having a fantastic 35%-off storewide year-end sale for both new and existing customers!

Anyone who wants to take advantage of this last deal of the year can use the code “thanks35” at checkout for 35% off ANYTHING in their cart. This applies to every item storewide, including Complete Collection purchases and Collection upgrades! Sign into your account before you upgrade to get the best discount possible on the Collection for owning prior products. If you didn’t see an item in the 12 Days sale, or missed a specific product, this is your last chance to get great savings on any or all of Topaz Labs 17 products.

What living in the country is all about:


And here's my wish for everyone, that 2017 will exceed your expectations and when it's over, you'll look back at the year with joy.