Look where you want to go

Some words of encouragement.


Look where you want to go


This is a sentence pronounced by every motorcycle instructor who ever lived. Not once, not 10 times, 10,000 times. It's one of the first things every motorcyclist needs to know, to love, and to live. It's something you need to do, and being reminded of it will often get you out of trouble. But this is not about motorcycling.

You need to do this with your life.

I have a friend, in a place where I never want to be, and neither do you. George is in the middle of chemotherapy and radiation treatments and having a tough time. Today he said to me, "...my resolve is cracking...". This is one of the toughest guys I know, he does everything well and to the best of his ability and clearly he's being pushed to the limit, but I know he's going to come out the other side. He needs to keep his eye on the prize... to look where he wants to go. As a Chief Motorcycle Instructor at Humber College, George knows this in his heart, but we all need to be reminded from time to time. Hang in there, buddy.

It occurred to me, as I wrote back to him, that this applies to almost everything in your life. First you need to figure out where you want to go, then you have to focus on getting there. Every day, every step you take, should be in that direction. There was another concept called "True North" that I wrote about some time ago on the blog (perhaps worth a read. Here) that tells a similar story.

There are so many trite phrases rolling around in my mind as I write this. I'm not going to say them. Just think about this for a minute in context of where you are right now and where you want to be.

Now Look Where You Want To Go. 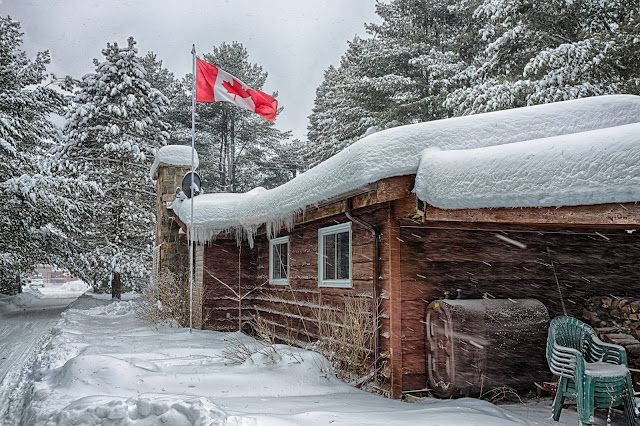 For the past few years, I've made available my 2012 "Winter Wonderland" eBook at no cost to subscribers to my blog. It's that time again. It's a 56-page PDF eBook with tips on winter shooting and a small composition section at the end. It's not rocket science but it might help some of you with your mindset when you go out to shoot winter pictures.

If you already subscribe to the blog, you've already received the link to the eBook. If not, just click "Newsletter" at top right and follow the bouncing ball. You can unsubscribe afterwards with one click if you really must. I'll send the eBook link again in next week's update. I would just ask you not to reproduce the eBook or send the link on to others, send them here so they can subscribe as well.

I'm Addicted. I admit it.

I'm addicted to images taken in the canopy on Arowhon Pines Road when the fall colours have peaked. I never get tired of them, or of making painted variations of them. 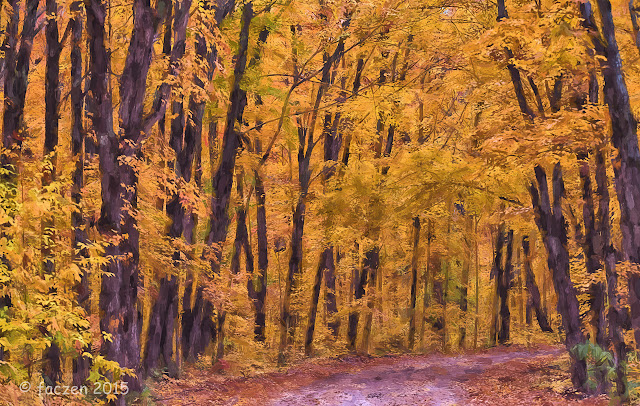 Here's another shot taken in Algonquin Park last week. Yes, the colours were spectacular. Not a lot of reds, though, I will admit. 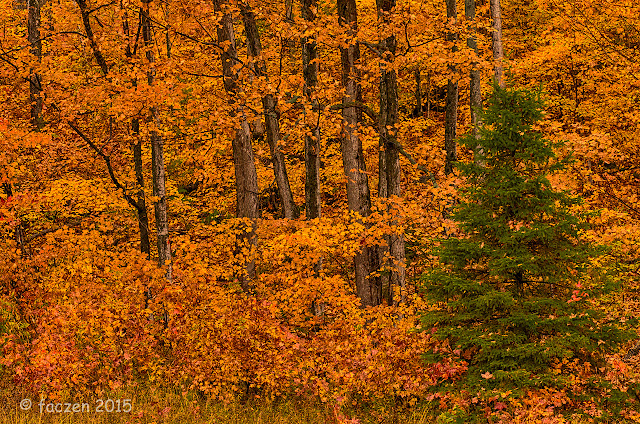 I was up in Algonquin again on October 24th.  I was with Genny and Dean Ribalko (Genny is with TDPC and was up here a couple of weeks ago, couldn't stay for the Algonquin trip). We met some really interesting people and, it turned out, had a great photo day!

You probably know that names and I don't get along: but if you have a computer to remind you... last week Amin and I met Wesley and Mitch and Stephen (and I don't remember who the fourth person was!). On Saturday, it was Rico and Kent and Jim and Joe. All great photographers and good people. I was especially impressed with Kent's knowledge and experience (and great clothes and equipment!). Off-topic, he had a Canon 100-400mm lens that was able to focus to as close as about 50cm! Nice. Rico had a 500mm f/4 prime, really sharp but it didn't focus close at all. Jim had the Tamron 150-600 on his D7100. Rico and Jim have met Dr. Ron (and me, at Carden Plain as well). They said they have sites where there are literally dozens of snowy owls... hoping for an invite!

Kent, especially, knows where the wildlife live in the Park. He took us to one and while the rest of us were chatting he disappeared and came back a few minutes later and said the father fox was back, and was napping in his den. For proof: a photo on the back of his camera of the sleeping fox (link)! He also called in a bunch of grey jays, to Genny and Dean's delight! We all got great pictures.

I took lots of fox pictures when he came out to greet us after his nap! So many good ones that I'm having a hard time choosing which one I like best. 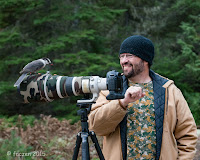 Rico and Genny have visits from Grey Jays*!


Some of us wandered off through the park in search of moose... no luck that day. We embarked on an almost-6-km-hike down the bike trail behind the Mew Lake Campground to see a moose carcass reported in a pond where bears were seen feasting on it. Basically nothing left to see. At least I got a little exercise!

Products with my pictures on them


Normally I don't sell stuff here. But I just think it's so cool having products with your own images on them, that I had to share. No pressure: just showing you some stuff you can get!


A couple of months ago, I had an iPhone case made with one of my images on it. 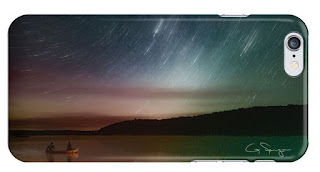 Although I love it, I think you need a strong image as opposed to a subtle one to give it some impact. So I just ordered a new case, that looks like this:


Then I decided I would also like a throw pillow with the same design, here I used the full picture instead of the cropped one on the iPhone case.

I order these products from a company called "RedBubble", where I also have fine art prints listed. If you would like to order one of these (or any of the other products they have with this image on it), go to this link. If you want to see other images that I have on that site, use this link. They are very fast and reasonable, and the quality is great! I can add pretty well any one of my images there, if something else strikes your fancy. Email me.

I also added the fox picture. You can buy 20 different products with that image on it from RedBubble for very reasonable prices! Link

By the way, I sent a pillow with the baby owl picture (here) to my granddaughter and she loves it!

See you next week!

Posted by Glenn Springer at 1:59 pm