OK, hold your horses. You know that I'm going to make you read through some irrelevant drivel before I get back to the topic in the heading and any pictures that I have for you to look at are down at the bottom of the post, but that's like the grocery store who makes you walk through all the food aisles to get to the milk cooler, on the off-chance that you might spot something else on impulse and throw it in your cart.

You know who's the master at that? Costco. Who has actually gone into Costco and left with only the items on the list they brought in? Not me. Go in for coffee and toilet paper and come out with 27 items totalling $350. And every one of them a great deal!

This week in review
Where was I? Oh yeah... it's been an eventful couple of weeks, some good, some bad. I haven't been shooting a lot of pictures because I've been spending time responding to a 'request' from CRA (that's the "Canada Revenue Agency" and for my American friends, think "IRS"). Yes, folks, I'm being audited. Fun, eh? OK, it's not all that bad (I hope!) and I should come out OK, but what a waste of productive time and I dread the bill from my accountant. I also had a wicked stomach flu last weekend and I put those events on about the same level of enjoyment.

On the good side of the ledger, we had our "Re-certification Weekend" at Humber College last weekend — it's "train the trainers" time for us motorcycle instructors, and the season is starting anew. I really have to get out of this computer chair and back into exercising on the parking lot. I promised one of my friends I'd lose 10 lbs by the end of April. Let's see if I can! The weather last week was incredible: many degrees above normal for this time of the year, and I unlimbered my motorcycle and rode a couple of hundred kilometers on the dirty sand-covered roads up here. I enjoyed every minute.

The water on the lake is wet again, instead of hard. I didn't see any incidents here, everyone seems to have retrieved their ice fishing huts safely. There was an interesting image or two that I captured.

﻿
I was in Toronto last weekend as I said: and it's starting to 'green up'. Not here, yet though. You can see the odd daffodil plant beginning to show itself in protected sunny spots, but I ain't taking the snow tires off the car yet. However it did remind me that the time to shoot trilliums is not that far off, and I've sent out invitations to the usual group of characters who come up to enjoy a weekend here. I did repair the barbeque — replaced all the rusty innards with shine new stainless steel. Interesting how much better it is to eat food that's brown instead of black! I debated replacing it instead of fixing it but now that money can be earmarked for a new camera (if CRA leaves me any!).

What else... Adobé (see how I spell that? Tongue implanted in cheek...) has acknowledged the latency/slow problem in Lightroom 4 and said yesterday that there will be a fix released this week. I'm not holding my breath... they also announced a public beta test for Photoshop CS6. No thanks. After the LR4 debacle, I'll wait until the early adopters have already debugged the program. Then they announced that if you buy CS5 now, you'll get a free upgrade to CS6 when the time comes. Worth considering if you need the program.

Inspiration
I want to revisit a link to a site that I brought up last September. It's called "1x.com" and you can link to it here. I look at a lot of pictures on the web: friends, NAPP portfolios, etc. but on 1x the photos are to such a high standard, sometimes I feel like throwing away my camera and taking up needlepoint. It's a 'curated' site, so only the best images are approved. I've submitted 2 images, my best, and they were both rejected. I sent in another one today. If I ever get accepted there, you'll hear about it, big time. But looking at the images there is inspiring and as I said, a bit daunting. Go look, it's worth it. You can look at everything in that link or you can choose a genre that interests you.

Published!
I need to thank Lance for this one. He sent some links to a magazine publisher who was looking for images to use to illustrate the goings-on of various camera clubs, and the magazine chose my "Boat on a Dock" image to publish. As soon as I see it in print, I'll share the name of the publication here, but I'm honoured and excited to have been chosen to represent the club. But wait, there's more!

OK, this isn't the same thing — remember I mentioned a couple of weeks ago that I won the Blurb book contest at the Richmond Hill Camera Club? (by the way, if you're not an RHCC member, you won't be familiar with the talent in that club. Click here and watch the slideshow of winning images from the last competition. Some of the talent there will blow you away). Anyway, I finished the book and sent it in for printing. While I was there, I learned that you can now create an eBook designed to work on an iPad or iPhone and I converted both the new "Winter in Haliburton" book and the previously unpublished "Pathways" book. You can preview both books here and here, or via the widgets at right, and you can download .ePub versions to your iPad for a nominal fee. Very exciting.

I'll leave you with a few pictures. Enroute to Toronto last week, I drove through the hamlet of Argyle and stopped to take a few pictures. I shot some 5-shot bursts and came away with these high-key HDR style images. After the fact, I noticed that there was a huge spiderweb in the door window of the old truck: hope it's still there next time I'm through! 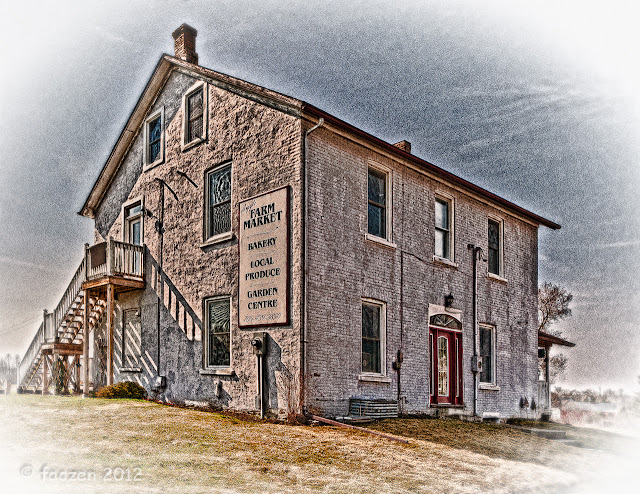 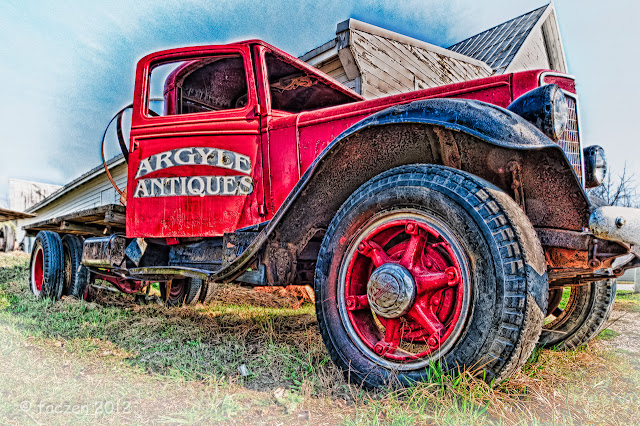 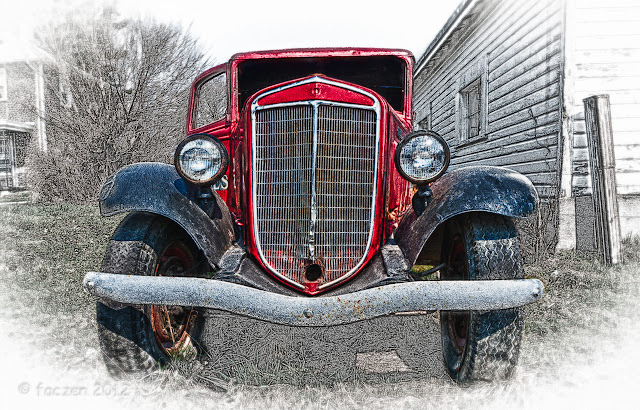 See you next time!

Posted by Glenn Springer at 3:56 pm