Life in the Haliburton Highlands

Before we get started:
Nikon announces the D800!
If you're reading this after the fact, it's old news but they released it YESTERDAY!

The exciting part is, I'm only one lottery win away from one!

For a landscape or portrait photographer, this blows everything else on the market out of the water. Scott Kelby said on his blog today, it's aimed at "...photographers who shoot medium format digital backs. I mean who used to shoot digital backs...". We're talking PhaseOne and Hasselblad people.

It's a full-frame 36.3 megapixel camera with full 1080p video and stereo sound and other goodies like built-in HDR... actually the $3000 price tag is not unaffordable, although if you don't already have FX lenses...

Go to www.nikonusa.com or for a broader view, www.nikonrumors.com for more details. And check out the promo video, "Joy Ride" they shot in Chicago entirely with the D800. It's linked from the nikonrumors site. I found I needed high speed to see it smoothly, don't know if that's because their bandwidth is being used up by early viewers.


PS:edit added — here's the link to the best features page I've found so far on the D800, on the Nikon global site: http://imaging.nikon.com/lineup/dslr/d800/features01.htm#a12

Technically I don't live in Northern Ontario. But on a recent visit to Toronto, I was struck with how different it is here and there. We actually have "winter". Toronto does not. Temperatures were in the double digits (that would be above 50°F for my American friends!), while they just barely cracked the freezing mark up here. I'm not complaining — our world is white and yours is fugly!

The other morning I was awakened at 5:30 am by the crackling of electricity and the flash of fire from an exploding Hydro transformer across the street. The crew was there in short order and replaced it. I got this shot of the guy in the bucket: his nickname is "Killer" (look at his helmet)! 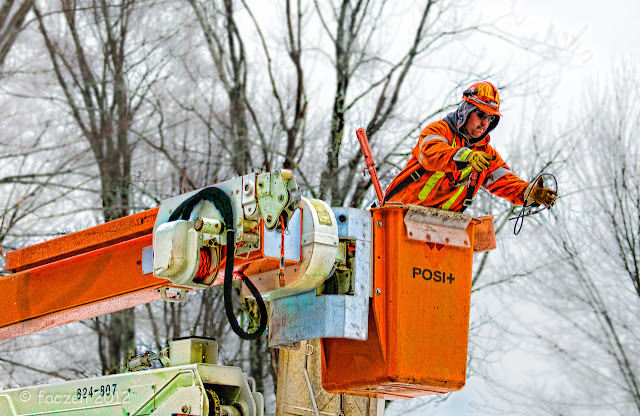 Ice Racing in Minden
(you think these guys can get car insurance?)

It seems that although there are lots of ice racing venues, for car and motorcycle, there's only one land-based track around (that is, not on a lake). The advantage is, of course, nobody goes through thin ice! Also they can groom and prepare the track. I was told that the ice is at least half a meter (18") thick because the studs from the tires can rip up to 8" of ice away over a weekend.

I shot these races last year too but didn't have a 400mm lens. On Sunday I shot entirely with my long lens. Here are some images I got: 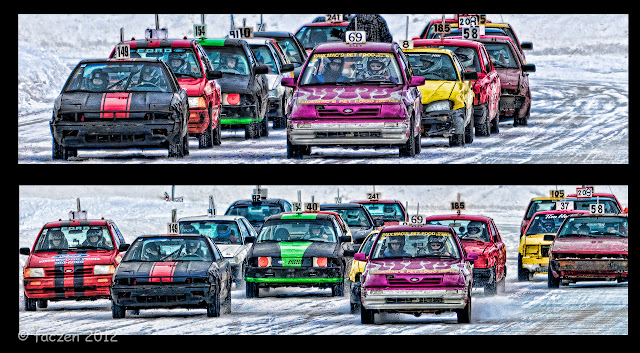 This shows the cars lined up for the start of a race, and the second shot is about 2 heartbeats after the green flag drops. Everyone is jockeying for position. 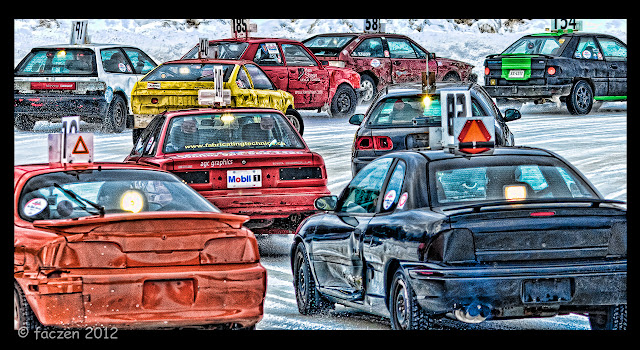 A few seconds and a couple of hundred meters later, the pack is in the first right angled corner, probably doing upwards of 80 kph (50mph) as they slide sideways through the turn. Remember, the surface is ICE! 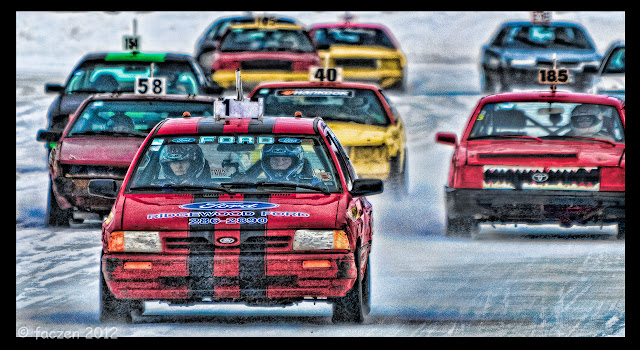 A couple of laps later, a leader emerges. But there's a lot of dented fenders in the meantime! See what I meant about car insurance? 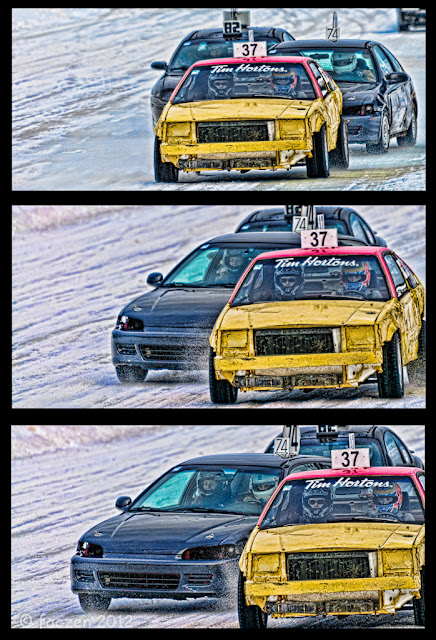 Here's a 3-shot sequence of a really aggressive driver in the #74 car passing the #82 car at high speed on the start/finish straightaway. By the time he reached the corner, he had passed the Tim Horton's car but his speed was too high for the corner and he lost position in the turn.

Fun to watch: come up to Minden on a weekend in February and March and enjoy the races. But this is the Haliburton Highlands in winter: bring your woolies!

One last shot for your viewing pleasure: 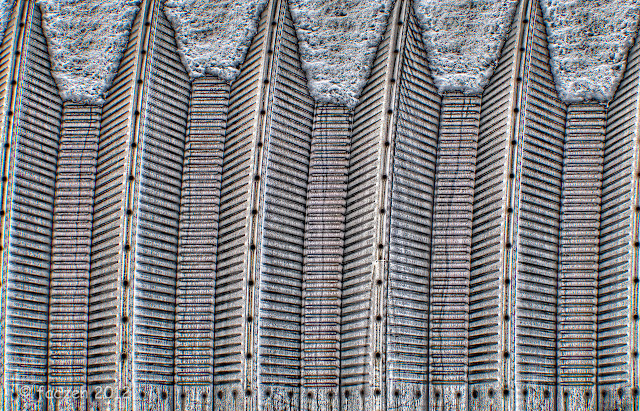 Beside the track is a large quonset designed storage barn.
I thought the pattern made for an interesting shot.