A quiet week in the North country

Late spring is clearly upon us. The weather is great, it's very green out there, and the mosquitoes are back. The good news is that the black flies are pretty well gone, though. I actually sat out in the screen tent having dinner last night but I have to break out the citronella candle. Although there were only a few mosquitoes around, they were hungry!

Yesterday morning I saw the sunlight singling out a dandelion puffball in front of the house: the background was in shade but the flower was in sun. I moved around to where it would be backlit and shot this image 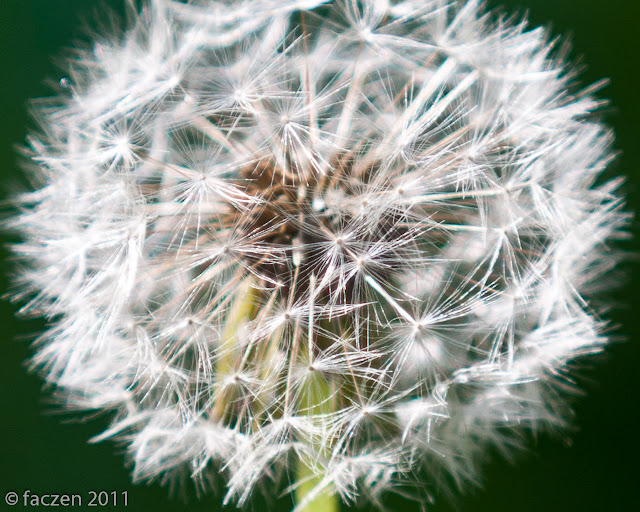 Shot with the 70-200 lens wide open, so it had a very shallow depth of field. I used the soft outer part to frame the crisp centre of the image. This was stopped down more than one stop to hold the detail in the bright areas.

It's been a quiet week for me, focusing on work and not much else. I did get out yesterday though. The most exciting thing was buying a new shower head at the Haliburton Home Show. On the way home, I came across Bambi and his sister out playing in traffic on Highway 118. 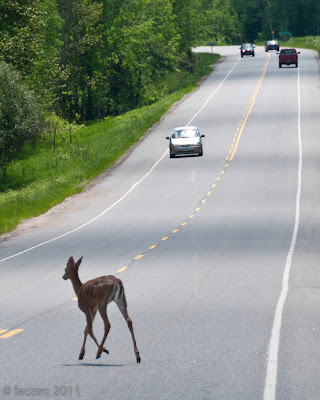 I stopped and tracked them for a bit and got a couple of interesting pictures. 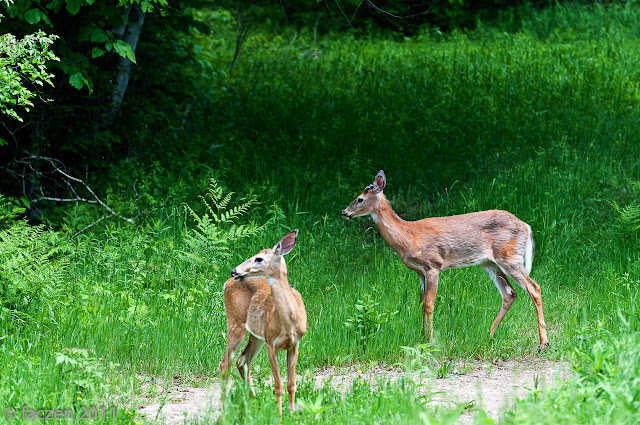 These are obviously young, probably year-old deer. Just because they are not mature-sized and because they have very little fear and were much more intent on eating the tasty foliage than on me. This is a full-frame shot with the 200mm so I was about 50 feet away.

I shot the picture at f/2.8. I generally set the camera at that opening so that I can capture shots like that without having to worry about shutter speed, then I dial it down later if I have time. Because of that, the little doe in the foreground is not in perfect focus, so I had to take it into Photoshop and tweak it a bit. That's all I did to it, though — this is exactly what I saw through the viewfinder.

Because the focus wasn't the best, I decided to do a version of the shot without her there and used the magic of Content-Aware-Fill in Photoshop CS5 to remove her. I cleaned up the distracting branches at upper left and cropped the image slightly to get this final image. I kind of like it — you? 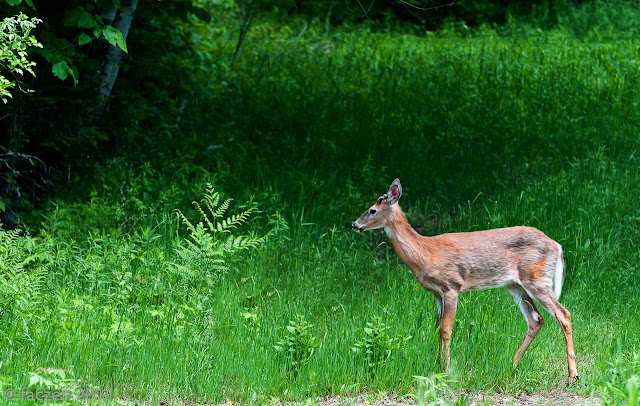 That's it for today. Hopefully I'll have some new images for you later in the week. There's a female ruby-throated hummingbird hanging around my hummingbird feeder (haven't seen the more colourful male yet. The flowers are just starting to open in the garden so maybe he'll show up soon).