And a great success it was! First thanks go to the creator of the fine weather we had: it was a little cool, but we had awesome sunrises and pretty good sunsets as well. I have to admit, though, that the sunset on Monday after everyone except me had left, was the best.

We were a "Group of 6". A good number because I was able to seat everyone at the table easily, we could look at our photos on my monitors without trouble, and everyone had a place to plug in their computers. Thanks for the great zucchini dish, Shannon (and the recipe), Kathy for the pies (which weren't baked, we didn't know that but caught it in time!), Bernie and Josie for their insights and Liz for a breath of fresh air!

I have some images from everyone to post on the photography.to site, as soon as we get the formalities out of the way. In the meantime, I see that Shannon put up a blog posting with a few of her images, here: http://shannonlafferty.blogspot.com/. I LOVE the first image she posted. I wrote that I wished that when I grow up, I could be like her! 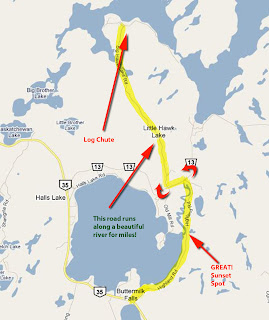 A few of the venues I selected. I showed this map and some others like it on Friday night in a PowerPoint I created outlining what I was hoping to accomplish during the weekend. Although there was a teaching element to it, all of the participants were experienced and excellent photographers so I didn't want to create a rigid atmosphere. My intention was just to plant some seeds, and let the individuals make them grow in whatever direction they wanted.

My intent was to go out on Saturday and shoot images by following the "rules". Everyone did. Then on Sunday, I told people to go ahead and BREAK the rules. I don't know yet if anyone did and if they were successful. We'll see when they send me some images! I did, though: Notice how your eye goes to the 'window' which is the brightest spot in the image, and which is centred left-to-right? But if you stay with the picture for a while, you look at the texture of the ceiling, which is really the focus of the picture. I broke the rules, just to see if it would work. Did it?
By the way, I'm enamoured with HDR and Topaz-enhanced images. This was also a hand-held multiple exposure (breaking another rule, about using a tripod!) and I set the edge glow quite high. The tree is centred in the window. How many other rules did I break?

In the same location (my neighbour's old barn), where Liz and I went to shoot for a bit on Sunday afternoon, I got what I consider my best "art" shot of the weekend: 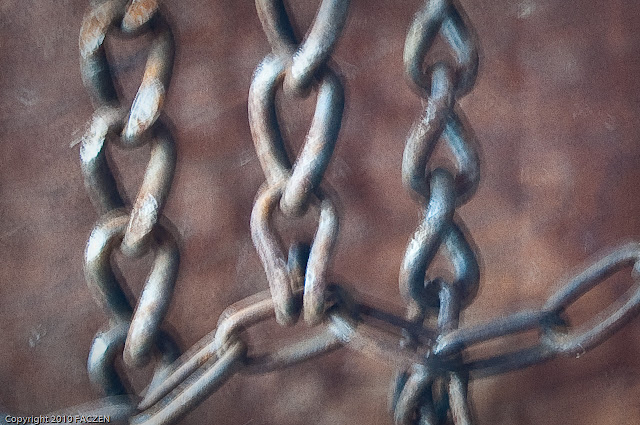 This is cropped from a larger image. I call it "Chain, Chain, Chain". The motion blur is due to the slow shutter speed, and no tripod again. Breaking the rules!

I said we got some good sunrises ( see Shannon's blog for the best shots of the group, in my opinion). I did my crazy HDR thing...

...but I also got a few more conventional images which you can see on my Smugmug Gallery here. I took a couple of good 'people' pictures, especially of Liz, one of which is here: 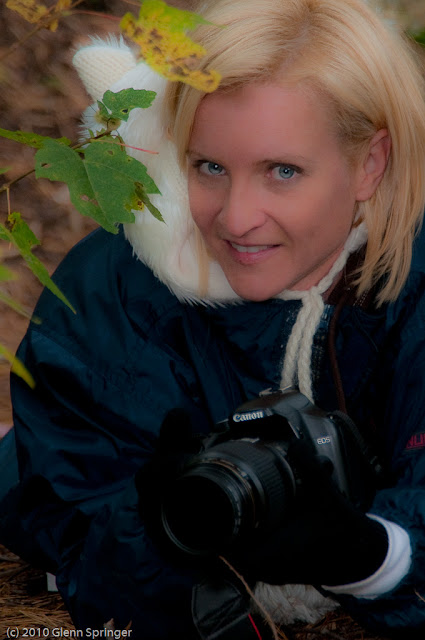 I enhanced the eyes in Photoshop, and softened the image by reducing the clarity in Lightroom, that's about it. I deliberately didn't crop this one too tight because I wanted to show her as a photographer.

I mentioned the Monday night sunset. I was chainsawing down some rose bushes (hope they come back next year!) and turned around to see the most AWESOME sky I've seen in a while. I dropped the chainsaw (which cost me at least 45 minutes reinstalling the chain that came off the track!), grabbed the camera with whatever lens happened to be on it (the 12-24mm wide angle) and ran behind the Red Umbrella Inn to try to get a few shots before it went away. 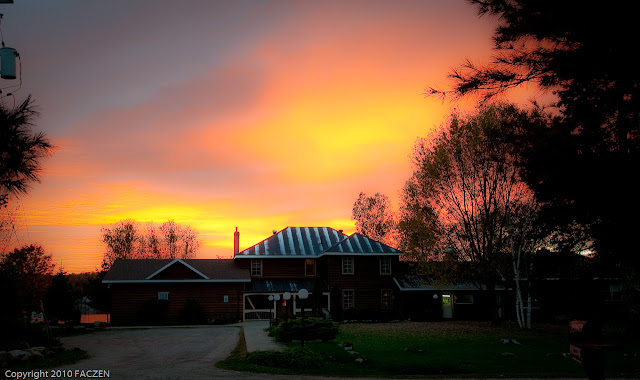 I took this picture of the Inn as I was running out there. Not an HDR or anything, this is what it really looked like! "The Sky is on Fire!" .

Then I took a series of shots, all hand-held (no tripod: I told you, I RAN out to get there before the sky changed!). It's hard to choose my favourite, but this ranks up there: 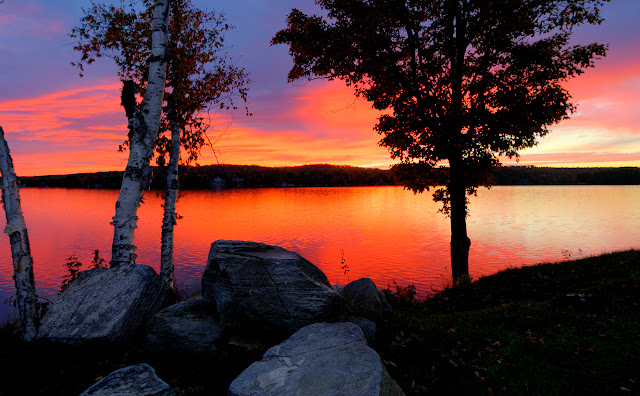 All of the participants said they'd like to come back again. I'm still waiting for more feedback which will guide me in future workshops, and I'm planning to do more of them. Email me if you want me to send you details when I design the next one.

Posted by Glenn Springer at 6:19 pm