Shooting with a bunch of pro's is inspiring!

And at the same time, sobering. It makes you recognize your shortcomings and makes you wonder if you really do measure up! (there's room here for comments, folks. Leave a note telling me how talented and wonderful I am, and I'll be forever grateful to you for stroking my ego!)


Enough kudo's. Where I'm pretty good is at creating post-processed images, but you need good original shots to work from and that's what I'm going to work ON. The opportunity to go out and shoot with other people and learn from them is invaluable.

As you may have surmised from the above, I spent a few days on what I would loosely call a "workshop" ('Expedition' and 'Safari' don't do it. Is there a more appropriate word?) down along the North Shore of Lake Erie. Thanks to Kathy for her work arranging everything and to Jim for his incredible hospitality, even while worried about Jen in the hospital, and to everyone else, well just for being there!

Here are a few shots I took on the trip. There are some more on my Smugmug site (they start here), but these are the ones I like best for now (haven't had a chance to look at everything! There may be more...) 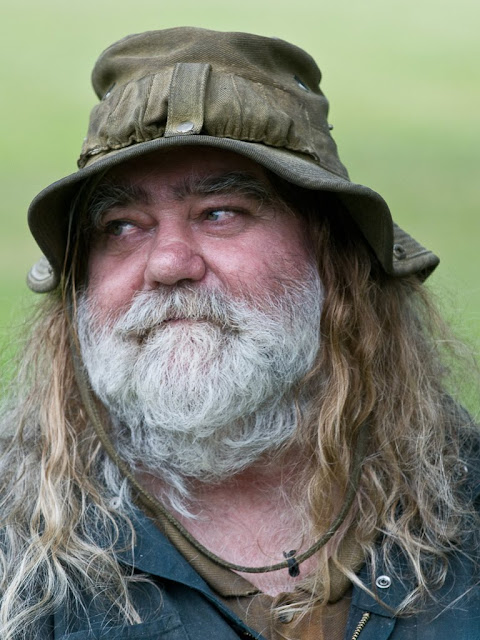 We met this guy sitting in a chair in a park in Dunnville. He claims to be a well known political activist through the '80s, that he's been arrested 10 times, that he's well known to agencies like CSIS, the CIA and the FBI... anyway, he's incredibly articulate and, some of us think, would make a great subject for a TV documentary. His name is Ken Hancock, but Google doesn't have much on him. 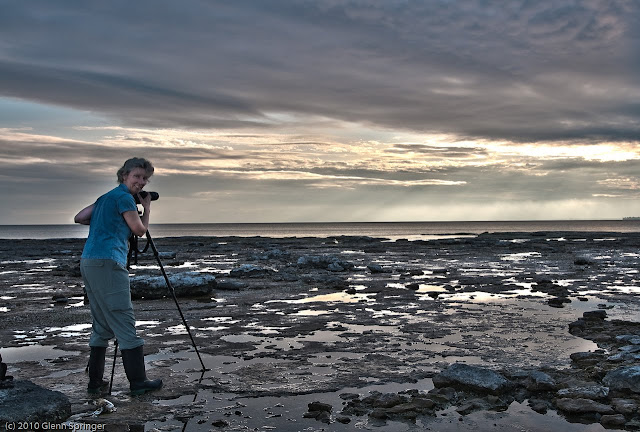 These two images illustrate the difference when you add an interesting person to a landscape shot. I find the second image, with Alex Ney in it (thanks for posing, Alex!) to be far more interesting than the ordinary landscape. I should have taken a little extra time to use a flash fill, but I managed to make do with Lightroom and Photoshop. Both photos were taken on the shore of Lake Erie at sunset, near Jim's cottage.

This image was taken at the Dunnville Airport, which houses the RCAF Museum that specializes in the Yale and the better know Harvard trainers. I daresay virtually all RCAF pilots from WWII onward trained in one of these. A couple of planes flew in from nearby Tillsonburg to wait out some bad weather. It's interesting that I happened to click on the first website after googling "Harvard Trainer" and came across this illustration. Plane #46 is mounted on a hard display stand at Dunnville. Plane #47 was one of the two that flew in! This is, of course, an HDR enhanced image, with further processing in Photoshop using Topaz Adjust. 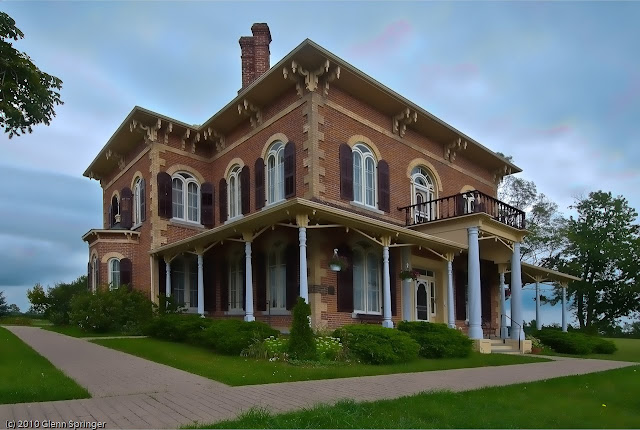 We went to a place called "Cottonwood Estates" where people dressed up in 19th Century costume and the house was restored to the splendour of the mid-19th century. I was decidedly NOT inspired to photograph inside (not my thing. Too much clutter, I didn't see any way to isolate subjects). I did, however, shoot this exterior shot as an HDR, then I used Topaz to simplify and smooth it (as opposed to my usual enhancement of details). I shot with the 12mm wide angle lens, then used a perspective crop in Photoshop to square up the building.

Announcement: we're going to do something up in the Haliburton Highlands on the weekend of October 2, 2010. It should be about the best time to shoot leaves and autumn outdoor shots and we're going to make a workshop out of it. I'll send out more information soon, but if you are thinking you might like to attend, send me an email.
Posted by Glenn Springer at 11:03 am