Did you miss me?

After I finished the fourth Lightroom article, I had to pay some attention to other things. So I haven't posted in a while. A few things did happen in the meantime...


Note: I added this little section after the fact. I had a few calls about the Lightroom articles so I wanted to make a quick response here. The articles don't "Teach" LR. They just summarize a few of the features and pitfalls for thos contemplating getting their feet wet in LR or who are new at it and are lost. The articles are supposed to be read in order, 1 to 4, but the nature of this blog means that they're posted in reverse and in fact, the first article has fallen off the bottom. Here's what to do: click on February in the Blog Archive at right (not in the screen capture below!)  to expand it, then click on the article itself, starting with #1 at the bottom., 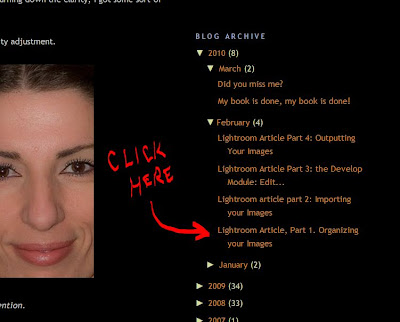 It's nice to be recognized!

Remember the "Mountain Man" image? It seems that some other people liked it as well. In fact it was awarded "BEST PORTRAIT" in the Digital images category at the 2010 GTCCC (Greater Toronto Council of Camera Clubs) Interclub competition. Yesssssssssss! Several people congratulated me, and a couple of them remarked, "OK, so isn't it time you got back to doing some painting? One of them was Hilarie who taught me in the first place. I need to make the time to focus on it and I will. In fact, I have an image in mind that I'd like to work on... news at 11. Which means later. I'm going to make a larger print and get it framed. When the same image won the Richmond Hill print competition last year, I won a free picture framing. If I can still find the award (hmmm. It's somewhere in my computer room!), I'll get it properly framed for display. It's getting hard to find space to display all my award-winning shots! LOL

I wasn't the only one to win an award at the GTCCC's. Irina Popova, Lance Gitter, Fern Gitter, Bud Newton, Robert Fowler and many other RHCC members won awards as well. Hilarie, who I mentioned above, won 4 (four) awards! Including First Place overall in Digital Pictorial. Click this link to look through some really fine examples of the art of photography.

Why I don't shoot pictures for a living
Last week a business colleague/friend asked me to shoot his picture for a business card. I was dumb not to ask how he wanted to use the picture. I came to his house, spent an hour or two shooting then a couple of hours editing before I posted the pictures on Smugmug for him to select. He told me which one, so I spent a couple more hours carefully editing and preparing the picture.Then he emailed me and said, "oh by the way, I want it floating on a transparent background. So much for my careful vignetting of the background. Out comes the old "Extract" tool in Photoshop (which isn't in CS4, you have to go find and download it), and about an hour later I had the close-cut image. Less than perfect, because had I known in advance, I would have chosen a background easier to select from. Then I get, "it appears a little dark...". So I've got to have 5 or 6 hours into this picture, which I'm doing as a favour for free. That's why.

I haven't been shooting pictures.
But that doesn't mean I haven't been doing photography stuff. Sometimes planning shoots and studying other photographers can be very productive too. I ran into photographer Lyn Winans in Minden one day last week. We chatted for a while and exchanged contact information. When I got home, I surfed over to her gallery site and was very impressed with her work. About 300 images up there, and each and every one of them is tack sharp and really well composed. Many of her shots had the "wow" factor that we all strive for. I won't post her pictures, of course but have a look at her gallery. My favourite of her images is this one.

I also invited Dr. Ron to shoot the annual group picture of the Humber College instructors. In previous years, I would set up the camera and run into the picture, which was good for a laugh. But I felt I was getting stale and didn't want to shoot the same shot year after year, so I asked Ron. I gave him a guideline or two, then left it to him. I have to say that I learned a few things — Ron has vision, different from mine (notice I didn't say "better". Ron would disagree with me if I said that but I would be right and he would be wrong. So there.) Anyway, I can't post those pictures here, because they're not ready. I'm sure he'll allow it but you're just going to have to wait and see! There's also an instructor at Humber by the name of John Kerns who is a superb photoeditor so he's going to do that part of the project!

Told you I haven't been shooting.
So this is the fourth topic in the post and still no pictures. Huh. See? Would I lie to you? I shot the FAC course ID photos last weekend and proceeded to drop my flash on the floor. Now it doesn't work (surprise, surprise!). So I need a new one. SB-600 or SB-800. We'll see what I can find at a reasonable price on eBay. So I had to shoot those photos and all I had was the popup flash on the camera. Yuck, to say the least. I duct-taped the Gary Fong diffuser on top of the camera. It helped, but I got some really ugly shadows. You do what you have to do. By turning down the clarity, I got some sort-of acceptable images. So I have to fix or replace that flash quickly.

Here's a typical shot with the pop-up flash and diffuser. Before and after clarity adjustment. 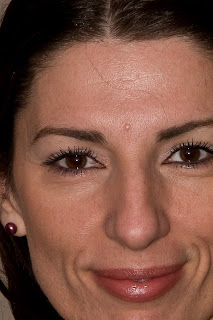 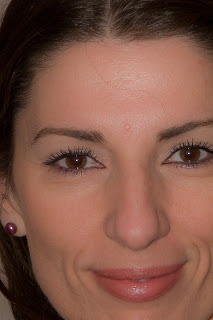 I think the clarity slider is a great invention.
All right, I lied.
OK, I did go out last week and shoot some photos. However not really with the intention of creating a world-beating image, at least not now. Again, I have an idea about what I want to create and I don't know quite how to do it so I went out to practice. Here's the deal.

I told Dr. Ron that I am contemplating returning to Newfoundland again this summer. We discussed a photo expedition that I was looking into and I told him I had decided not to go with them, for a couple of reasons — first, I looked at the work of the expedition guide and I don't think he has that much to teach me. Second, it's expensive and I could do pretty well everything he was going to do for much less. I told Ron that I had a photo in mind that I wanted to take. He said, "you're going all the way to Newfoundland to get one photo? That's nuts!" This after he told me he hiked 30 miles with a 4x5 camera for 2 pictures. We both realized that this is what it can be all about.

Do you think I'm rambling? Not really, I'm leading up to something. I'm trying to tell you, dear reader, that there's nothing wrong with getting an idea in your mind then going to extremes to achieve it. I want to take a night time exposure involving the sea, some rocks and if I'm lucky, an iceberg. The iceberg thing may not work because they move, so that would screw up the time exposure thing, but I might be able to capture it separately and post-process it together. Anyway, I've got a vision of what I want to capture and a vague idea how to do it, so I have to try it before I go.

I went down to the lake at night and captured this shot of some fast water coming out of a culvert: 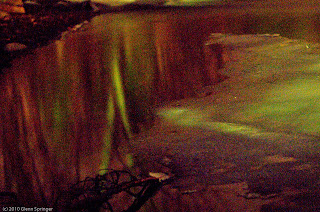 Nope. Didn't even come close to working. How do you focus in the dark?
While I was there, I took these so-so interesting images: 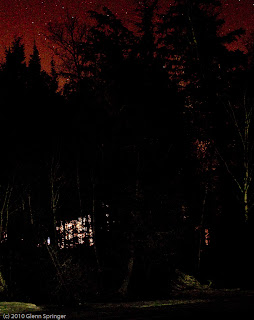 Not a forest fire – house lights through the trees 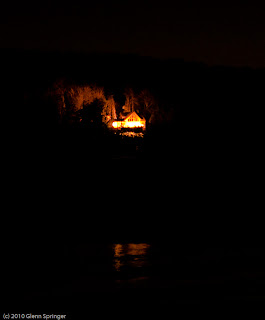 The house across the lake. Tough exposure! 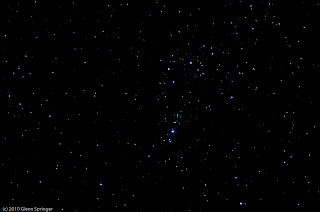 Star shot. The belt of Orion.
I went to the Minden Wildwater Preserve and did some exposures with heavy duty Neutral Density filters in place. I actually managed to do a 1 minute exposure in daylight. Now we're getting somewhere, but it's not ideal. The lens was stopped WAY down to f/32 which doesn't produce the best sharpness (see an earlier post about diffraction effect. Search for "aperture") and all that extra glass on the front of the lens... but the result is getting there. I just need to know how to do this in the dark! Here's the best shot that day: 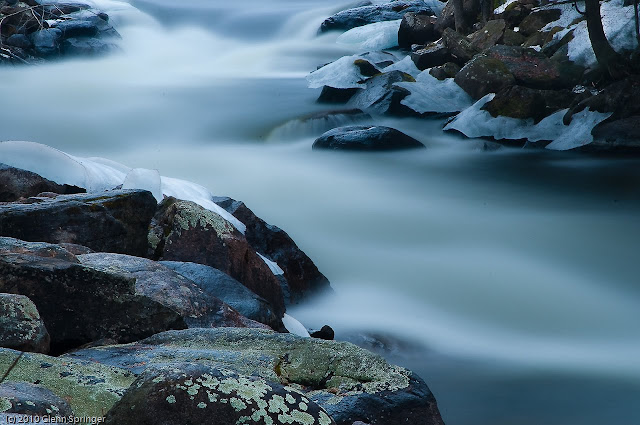 1 minute exposure at f/32, 100 ISO. I used the 24-120mm lens with an 8xND filter and a polarizer mounted for additional light reduction. As an aside, I remembered to turn off the VR but I didn't remember to turn it back on until just this minute!.

So what am I trying to tell you? By setting a goal and figuring out how to get there, I think I'm taking a step forward. It remains to be seen if I can capture that image I have in mind. I'll be disappointed if I don't but at least I'll have tried.


PS: anyone want to come to Newfoundland at the end of June? Email me.
Posted by Glenn Springer at 1:19 am