Did you miss me? It's been a while since I posted, but as you might have guessed from the title, I suffered a computer crash. My other excuses involve some medical issues and some work stuff that's kept me busy for the past couple of weeks. So not only haven't I posted anything, I've hardly pushed a shuitter release in the last month. I do have a couple of things to talk about and show you, though.

So in today's post, I'll talk about being prepared for that big day when your computer crashes, share some new purchases with you and show you a few images. Fair enough? Let's get going!

When your computer crashes.
As I said above, it is inevitable. Your computer is going to crash. Everybody pretends it only happens to someone else, never to you, but ignoring the fact that it WILL crash isn't smart. You have to be prepared.

I lost zero data. None. But then the computer that I use most of the time wasn't the one that crashed, it was my old desktop. I brought it up North about a month ago. The other day I walked into my computer room (OK, my third bedroom/office) and booted the machine, or tried to, because my scanner was hooked up to it. "Blue Screen of Death". Then nothing: "please insert a boot disk...". The hard drive was toast. My computer guy (Bob, the Greek Geek. He's really good: contact him or check out his website and be sure to tell him I sent you!) had a look at it and told me it wasn't worth fixing. Hardware + labour > new. Besides, it was an old P4 system and not worth it.

So I bought a new machine. The best deal I found was an HP bundle at Costco: a quad core system with 8Gb of RAM, a 750Gb hard drive, a 25" high resolution monitor and Windows 7, all for under $1000.

Now even though I didn't lose any data, I've spent the better part of 40 hours getting this thing up to speed. Configuring it (thanks, Jim — I don't what I would have done without your help!), installing basic software, then physically installing it up North. I discovered that my wireless stick won't work, so I can't get it online until I hit Tiger Direct and get another one tomorrow, and my attempt at networking it with my laptop using my old router was fruitless. Windows 7 seems to work OK, but I haven't spent enough time learning how to take advantage of some of the new stuff. I will eventually.

Imagine how much more painful this would have been if I had lost data. Imagine yourself losing your computer. What about your emails? How about your address book? All your passwords and accounts and favourites. Your accounting and banking information. Your documents. Your photos... are you backed up?

I don't have the world's best backup system. Far from it. But what I do have, saved my bacon. So I'm going to suggest you might want to consider doing something similar. There are two parts to the backup, the data and the programs. I did not have the programs backed up and to tell you the truth, I don't really know how. I know it can be done: people talk about "ghosting" a drive or creating a system backup. I ran one yesterday on my laptop (a system backup). It took almost 12 hours to do, but it worked away in the background while I did other stuff.. I tried to do the new system too, creating a set of System recovery DVD's, but my DVD drive doesn't like my disks, apparently (it works, though -- I did copy some data onto a DVD). So I would have saved several dozen hours if I had done a system backup on the other machine — not really, though because who needs to save old Photoshop CS2, or my XP operating system? Or Office 2003?

Anyway, let's talk about something easier: backing up your data. First thing you need is something to back it up onto. DVD's are not OK. They degrade with time and are not totally reliable anyway. What you need is an external hard drive (Jim, I know, not good enough for those who use DROBO systems and multiple redundant backups, but I'm talking to folks like me who don't really have those extreme needs). Here's the drive I have: go buy yourself one for Christmas. It's only $109 at B&H. It's a Western Digital MyBook USB drive and it holds 1Tb (that's 1000 Gb!) of data. Click here to see the specs and you can order it at B&H, probably the most reliable place to buy stuff.

How do you do the backup? Couldn't be easier. Plug the drive into a USB port on your computer, and into power, then drag your entire "My Documents" folder onto it. Be careful not to just drag the shortcut, you need the whole folder. Open it, then back up a level to see the folder itself. My 'Documents' folder is almost 3Gb in size. That's only 0.3% of that 1Tb drive! Once it's there, rename it so that you know what date it was. Next time you do a backup, keep this one and give the new backup a fresh name. Because you have such a nice big backup drive, you don't need to delete it, but I generally delete the third one back, just to keep things clean.

Not finished. If you have Vista or Windows 7, your pictures are not in this folder! You need to do the same thing with your pictures folder. Am I making any sense? Here comes the hard part: your address book and your emails! They are likely not in the Documents folder. You need to open your email client (I use Outlook  2007, for instance) and locate where the data is stored. In Outlook, click on Data File management under the File tab, and it should tell you where the files are. Mine is at C:\Users\faczen\AppData\Local\Microsoft\Outlook. Or you could just search for *.pst. Once you find it, drag a copy (Outlook has to be closed) to your backup drive. Do the same thing with your "Favourites" list in your web browser. Now you're done.

So if your computer crashes, and you fix it or get a new one, you can plug the external drive in and copy all that stuff back into the machine. How often you do a backup is up to you: I do a full backup every month, plus I keep critical stuff in other places, like my active database and my QuickBooks files. I copy those every night to a USB flash drive and often to my backup drive and other computer. I'd be dead in the water without this data.

OK, I've rambled on enough about doing backups. You know you have to. If you haven't done one recently, stop reading this and get going. You'll be sorry if you don't, when (not if) your computer crashes.

I bought a Kenko Telextender.
Against my better judgement. I really wanted the Nikon TC-17e which is a 1.7x extender, but they're over $400. The jury is still out about the Kenko one. It's a 2x extender and yes, autofocusing works on my 70-200 lens. It does help you reach out and touch stuff, but I'm not convinced it's terribly sharp. I'll do some more testing, but here's a shot that shows what it does: 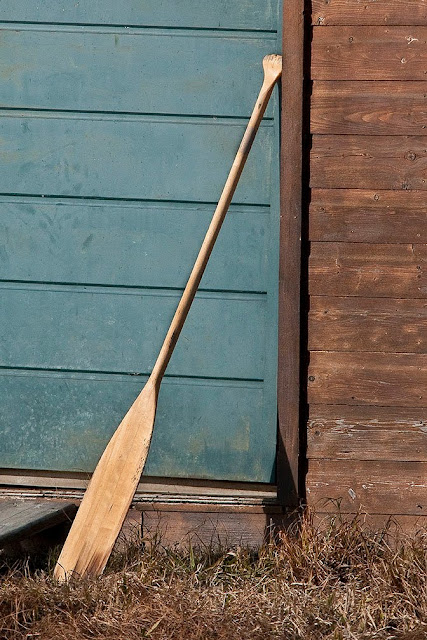 Here's another shot, comparing images with- and without the extender. 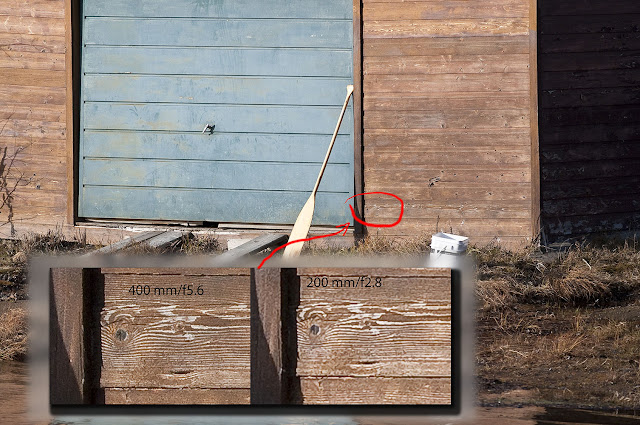 There is a clear quality difference between the two shots: by virtue of the fact that the crop was bigger on the 400mm image. Not a great test, but it shows that there is a place for this converter in my camera bag. It was quite inexpensive, roughly 1/4 the price of the Nikon. BTW, I can't shoot pictures with this thing worth a damn without a tripod.

I'll take some more comparison shots later. There weren't any birds around today to shoot!

If you want to see and/or buy these telextenders, click here:

I promised you some images

Well I have two groups of photos to show you today.First, I got interested in shooting star trails. I set the camera up at about 1am and left the shutter open for a good hour, plus. 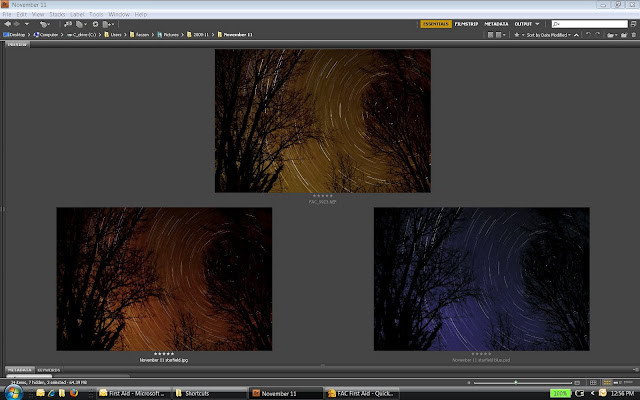 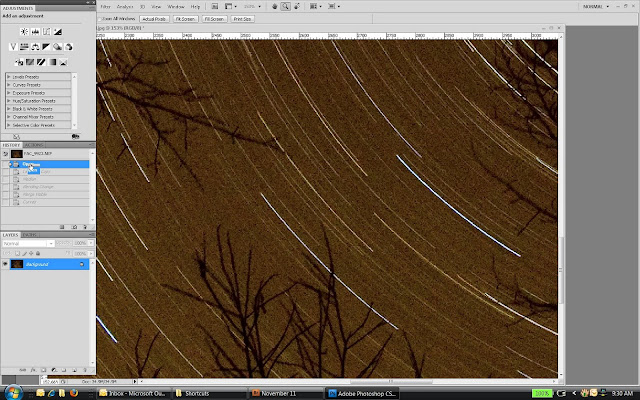 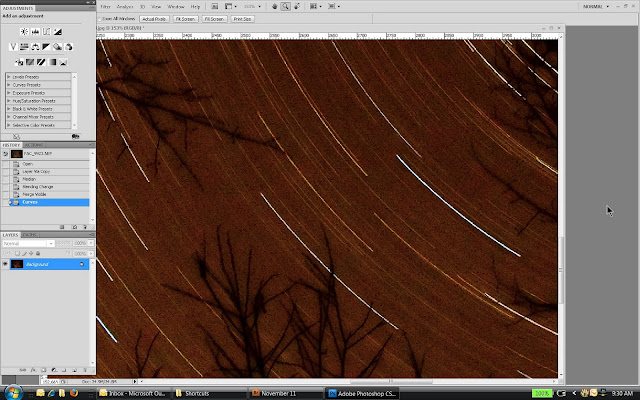 These two images are "as shot" and with some extra noise reduction. Exposure was 4209 seconds (70 minutes) at f/10, ISO=200. For noise reduction, I used the "median" filter at a moderate level (9 px) on a new layer. I changed the blend mode to 'overlay' and reduced the opacity of the layer to about half, then used curves to bring the brightness back. Note the softness in the tree branches.

The D300 has some amazing noise reduction algorithms built in. I just found out how it works: the camera creates a second image with exactly the same duration as the original -- so this shot actually took almost 3 hours before i could see it. It mixes the two images together, subtracting any noise generated by the sensor. The colour of the image is a mystery. There's no light pollution in the direction I shot, so I don't really understand why the image is yellow. Someone suggested it's a white balance issue. The camera was on auto WB, and it selected a colour temperature of 4150K. 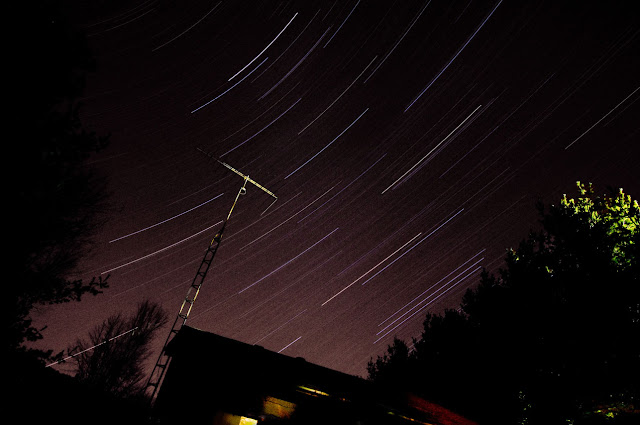 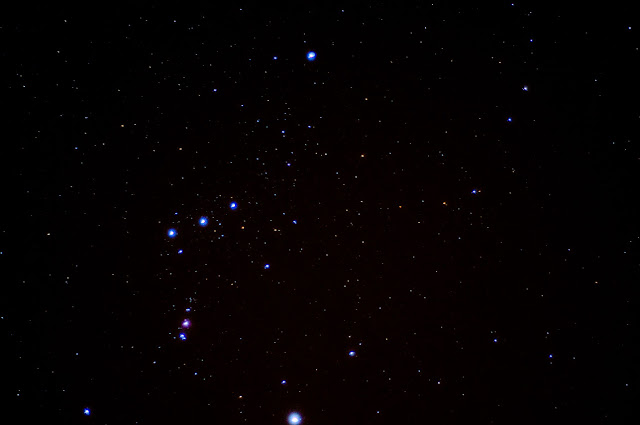 Let me leave you with a couple of family images. There's one of Maria, my daughter-in-law and one of my mother, both with my new granddaughter Leah. I selectively reduced the clarity slider on my mom's face, but otherwise, the pictures are pretty well as shot! 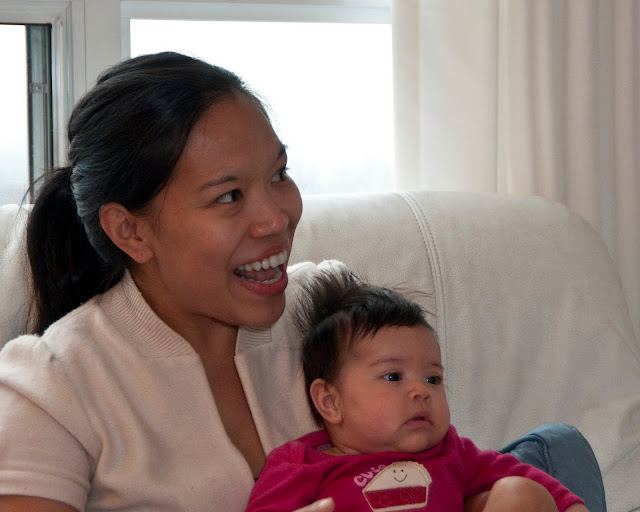 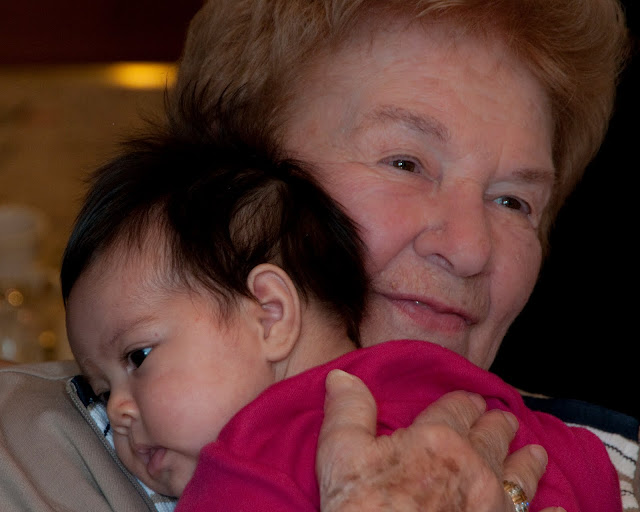 Posted by Glenn Springer at 2:39 am