I spent a little time looking through the workbook and my sketchy notes from the Adobe seminar. What the seminar was about, was to point out useful features in Photoshop. He did a quick demo of some of those features and then left the participant to go home and play with them. As I said, if he had spent a little more time explaining "why" he did certain things and how to use the features better...

Anyway, one of the things I've been meaning to do is to learn about "smart objects". So I created a poster (below) just for playing purposes. I used some of the font techniques he talked about (knew them anyway), did a couple of drop shadows because I think he showed an alternative way to achieve the same thing but I didn't get it, and tried the 'flaming ribbon' thing he presented. Oh, and I used the pen tool to create a path and then stroked it. If you read my Blog you'd know I do use the pen tool, but this is a new way of achieving stuff.

It's not great art but it's a basis for trying new things. 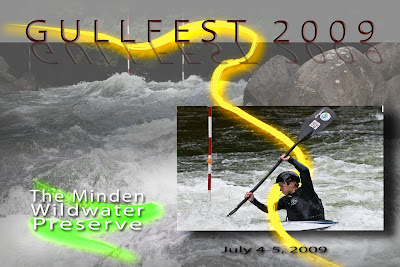 The picture of the kayaker is a 'smart object'. It's a simple matter to replace it with another image and retain all its characteristics. And rescaling it doesn't create resolution or resampling problems. Cool. Of course I'd have to redraw the ribbon if I changed images. Click on the picture to blow it up.

I have to spend some more time with some of these techniques before I can share them with you. Of course they say the best way to learn how to do something is to teach someone else how! Give me a few weeks.

There are a number of people asking me for Photoshop lessons. Most of them are almost new at it, or have minimal practice with the program. So I'm considering structuring a one-day seminar to show people some of the basics. I don't want to fall into the same trap that Corey Barker did, so I need to put some thought into it. If you're interested, email me and tell me (1) what version of Photoshop you have and (2) how much you've played with it. You could also send me an image or two that you've done and tell me what you did. Let's see if we can't get this together in the next couple of months.

I'm looking forward to the weekend shoot at the above venue. I was there yesterday scouting shooting points and I think I found a new one I like on the other side of the river. I plan to get there fairly early on Saturday, and Sunday morning Dr. Ron is coming up to join me so watch this space for some neat images.

Posted by Glenn Springer at 6:15 pm